Our Swedish correspondent PMP has sent a report about two different aspects of the Somali community in Sweden. The first aspect involves the intimidation of Somalis by gangs of unspecified ethnicity. The second aspect features a story about a young “person of Swedish background” who was brutally beaten and burned by Somali “youths”.

First, a subtitled news video about the harassment of Somalis in the town of Forserum. Many thanks to Michael Laudahn for the translation, and to Vlad Tepes for the subtitling:

Below is PMP’s report, based on two articles in Avpixlat. The first concerns the Somalis in Forserum, and the second the attack on the white teenage boy.

The ugly face of Swedish Media
by PMP

Recently there has been a huge media focus on the persecution of Somalis in the small town of Forserum. Just today the headlines hit the front page on a major newspaper, Svenska Dagbladet. Yesterday, it was represented in a news highlight in the mainstream media.

Stones had been thrown at the windows of the local Somali organisation. People had shouted ‘n*****r’ and other defamatory words. 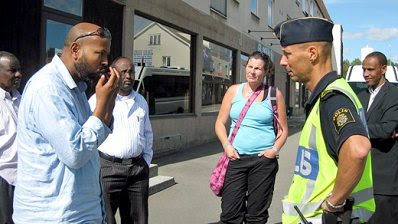 Somalis are upset after harassment and violence towards their group.


Now, most recently, we learned about another event in Sweden. 18-year-old Rudolf Moilanen, was on his way home late at night. He was sitting alone in a bus station in Swedish Jordbro. several men arrived at the bus station who spoke English with each other. First they beat Rudolf unconscious. Then they poured fuel on his body, and lit it on fire. Then, they kicked his body down a hill.

Miraculously, Rudolf has woken up, and is alive, but will be injured for life. In the hospital he could give details about the event. Just the other day, a Somali youth was arrested as a prime suspect in the crime. Rudolf believes the others were Arabs. 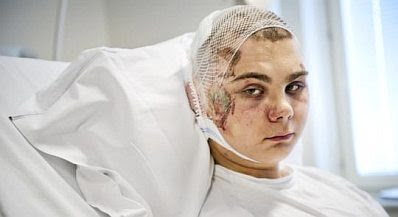 18-year old Rudolf was beaten unconscious and set on fire.


Now, in the media, there has been an almost complete silence about Rudolf’s religion. There appeared a brief article here and there, but every effort seemed to be made to forget this case as soon as possible.

Luckily, alternative media has kept the case alive and reported on its developments.

I just recently learned that there now will be a demonstration for the Somalis, largely by Swedes. A manifestation against racism.

But, say — who will demonstrate for Rudolf?

This is where Sweden is today.

12 thoughts on “The Ugly Face of Swedish Media”