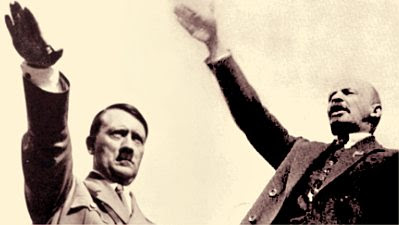 Our Canadian correspondent Rembrandt Clancy has translated another essay by the German writer M. Sattler. The author suggests that Mao’s “auto-aggressive” Cultural Revolution exerted direct influence on the culturally destructive ’68 generation in Germany, and hence on the current regime of political correctness.

The translator includes this informative introduction:

Below is an essay by M. Sattler entitled “No Fight against the Right” originally posted at Politically Incorrect (21 August 2012). Its focus is on the selectivity with which the “left-doctrinaire”, multicultural state protects the perpetrators of ultra-nationalistic, anti-Semitic or xenophobic doctrines, while reacting against native “fascistic” Europeans. As Michael Coren points out in his description of the behaviour of the multicultural Toronto police at the recent al-Quds Day rally in Toronto, this phenomenon is not limited to Germany. There the Toronto police interfere with ordinary peaceful citizens to the advantage of protected “fascistic” groups. See the Gates of Vienna post “The Police Have Become Political”.

Another companion piece to this essay is a video posted on Gates of Vienna called “The Better Lenin”,
in which it is argued that National Socialism and the Left constitute the same system. In a similar vein, Sattler suggests that Left and Right are mirror images forming “…a typical pair of opposites providing divergent answers to the same question.”

The Grey Wolves (Graue Wölfe) is the designation for members of the Turkish Nationalist Movement Party (MHP) founded in 1961. They also call themselves the “Idealists” (Turkish, Ülkücüler). The goal of the Grey Wolves is to unite all Turks by the establishment of a Turkish nation stretching from the Balkans through Central Asia into Xinjiang in China. German Intelligence (der Verfassungsschutz) of North Rhine-Westphalia, which monitors the Grey Wolves, alleges that the organisation is contributing” to the emergence of a parallel society in Europe” and sees it as “a hindrance to the integration of the Turkish population” (Source: Metapedia). Enemies of the Grey Wolves are made up largely of the Kurds, Jews, Greeks, Armenians, and the Americans. The Turkish ethno-nationalist movement can “howl their fascistic slogans”, as Sattler puts it, because “those responsible can file suit with reference to the anti-discrimination law” [Westdeutsche Allgemeine Zeitung (WAZ)].

The Bunte Republik (The Multicoloured Republic of Germany) is a political expression in Germany. M. Sattler uses it repeatedly in place of the official name for Germany, Bundesrepublik Deutschland (Federal Republic of Germany), hence ‘The Multicultural Republic of Germany’. The word play is on Bund (Federal) and Bunt (multicoloured, coloured, mottled, spotted). The ersatz expression carries the connotation that the multicoloured state is really a colourless, tedious and artificial construct. But originally the pun was a serious, albeit propagandistic phrase. The controversial former President of Germany, Christian Wulff, used the trite bund/bunt clang association in the multicultural context of his presidential inaugural speech (2 July 2010): “We must further internationalise our country. We can practise that here at home in our Bundesrepublik (Federal Republic), in our bunten Republik Deutschland (Multicoloured Republic of Germany)” [Official Source: Web Site of the Federal President]. Since the irony of the expression is central to Sattler’s emphasis on the culturally “auto-aggressive” and destructive effects of multiculturalism, the original German expression “Bunte Republik” is maintained in the translation.

The author, M. Sattler, makes periodic contributions to Politically Incorrect and in June 2012 Gates of Vienna posted a translation of another of his thoughtful essays called “Escape Into Dictatorship”.

The translated essay from Politically Incorrect:

No Fight against the Right
By M. Sattler

1. The Anti-fascism of East Germany

The anti-fascism of East Germany arose from its Marxist-Leninist tradition and its self-conception as part of the communist world revolution: The goal of the Marxist-Leninist worker’s struggle is in fact the worldwide overcoming of national identities through the construction of a social identity defined by class struggle. The Fascism founded by Mussolini formed the direct counter-thesis to that: in response to Lenin’s October Revolution, Mussolini called for overcoming of the class-antagonisms, not by struggle, but by national solidarity within the great totality. Both ideologies, Marxism-Leninism and Fascism, therefore deal with the same themes of “class” and “nation”. They form a typical pair of opposites providing divergent answers to the same question. Marxist-Leninist communism means necessarily rejection of its laterally reversed mirror image; that is, uncompromising anti-fascism, and vice versa [“laterally reversed mirror image”, des seitenverkehrten Spiegelbilds, can also mean a mirror image reversed left to right].

Since Marxism-Leninism strives to overcome the idea of nation and for the internationalism of the working class, it can combat Fascism consistently only in an anti-nationalistic way; that is, it does not differentiate Fascism by the criterion of nationality, into a “good” and a “bad” Fascism. It attacks the enemy, right-wing nationalistic fascistic thinking, on a worldwide basis: in Italy under Mussolini; in Poland after the military putsch of 1926; in Germany of the late 1920s; in the 1930s in Thailand and Japan and in Spain under Franco; in the 1950s and ‘60s in Turkey and in the 1970s in Chile. The anti-fascism of the Marxist-Leninist East Germany also stood in this tradition of a universal, worldwide oriented anti-fascism until 1989.

2. The Anti-Fascism of the Bunten Republik

In contrast to East Germany the foundation of our present-day “Bunten Republik” is to be sure unmistakably left-wing doctrinaire, but not Marxist-Leninist. The left-doctrinaire ideology of the Bunten Republik rests on the strongly Maoist-created Cultural Revolution of the ’68ers — a left-wing revolution which never took place in the Marxist-Leninist sphere of influence of the Soviet Union. As distinct from Marxism-Leninism, however, Maoism is not only a movement oriented toward class struggle, but is first and foremost a culture-war movement inimical to civilisation. The new communist man can only emerge insofar as he annihilates the “old” culture altogether. The core questions of Marxism-Leninism and its fascistic antithesis therefore play only a marginal role for Maoism. The Maoist does not struggle either against other classes or other nations; his fight is introverted and auto-aggressive; his image of the enemy is his own culture as part of the human civilisation.

These auto-aggressive Maoist influences also gained a foothold in West Germany after Mao’s 1966 Cultural Revolution, where they influenced the revolt of the 1968ers quite substantially. They also explain the different perspectives on Fascism between East Germany and the Bunten Republik. In the Marxist-Leninist East Germany a fascist was a fascist, no matter which country he came from. In the more vigorously Maoist cultural-revolutionary Bunten Republik on the other hand, Fascism counted as an enemy only in the auto-aggressive context. When 6,000 Turkish right-wing extremists [Grey Wolves] gather in the Grugahalle [an indoor sports arena on 19 Nov. 2011] in Essen and howl their fascistic slogans, this is no issue for the Bunten Republik. In Germany, to oppose Turkish Fascists would be counterproductive for the cultural revolution. Very definitely it is an issue however, when five German right-wing extremists gather in front of a drink-kiosk.

Unlike East Germany, therefore, the Bunte Republik by no means fights “against the Right” universally, it fights selectively. Out if its budget of millions for the “war against the Right”, it will never allocate even a single penny for the fight against the Turkish Grey Wolves. This apparent “double standard” is not, however, a consequence of a naïve misjudgement of the real situational danger stemming from right-wing extremism in Germany. It is a deliberate and entirely consistent course of political action which is immediately derived from the auto-aggressive character of the multicoloured ideology [bunten Ideologie], itself influenced by Maoism from the outset, and directed against its own culture and civilisation. To characterise the Bunte Republik as “anti-fascistic” or indeed to see it in the tradition of the universalised anti-fascism of East Germany is not only to misjudge the East German context taken by itself. Such an evaluation also misconstrues the historically evolved variations internal to the left-doctrinaire world of ideas, and hence the entire ideological foundation of our present-day Bunten Republik.

5 thoughts on “No Fight Against the Right”