[this post is dedicated with great affection to LN, who has suffered greatly at the hands of the Culturally Enriched who swarmed — swarm even now — over his country. They squatted on and ruined what should have been his “golden years”. As he might say — one never knows with him — “bah, humbug!” but I salute his courage anyway]

As many of our readers know, I can’t post much due to chronic fatigue and the various other karmic burdens my body has managed to accrue ever since my misspent infancy. However, I can — and do — lie abed of a morning looking through Twitter, finding various treasures I’d not have seen otherwise.

Perhaps a more accurate title for this post would be “Just One More Gypsy Vacation, etc” At any rate, this is simply the one I happened to discover today. In the end, we can only tell the news we know — at least those accounts which dare be told, eh?

One of the joys of the internet is flipping off that obscene Happy Face lid screwed down over the news the MSM doesn’t want you to see.

The story that follows is from a blog in Swedish — thank you, once more, Google Translate for opening so many doors. This one is called (I think) “Sweden Confidential”. The tale has a happy ending: bad guys get caught and go to prison, but it will send the p.c. crowd into spittle-flecked rage because Interpol cooperation nabbed these deprived unfortunates depraved criminals who prey on old people because they’re easy: the elderly are such soft targets when you have neither morals nor a conscience.

The emphases and asides below are just my editorial kibitzing — D:

Detective Mats Wahlberg is at the police unit in Vårgårda who work with aging offense*, and he says that this type of crime against the elderly are common. — It’s very lucrative, and then it’s a lot older who have some form of disability — maybe go with a walker or have impaired vision and hearing. They are easy victims.

[* Help, Swedish readers: is there really a police unit dedicated just to crimes against the elderly? If so, pretty cool…]

Three Romanians who conducted a theft tour in western Sweden were sentenced yesterday by Alingsås District Court to prison terms of between 1½ and 3 years. A 46-year-old woman and two 25-year-old men stole from a total of 26 different people at more than 20 locations. Overall their haul came to over 300 000.

In many cases, there were several offenses on the same day.

The convicted have admitted to some of the crimes they are sentenced for. They also said that one of the purposes of coming to Sweden was to commit crimes.

The thefts seem to follow the old-tried-and-true methods that petty criminals use in America: one perp to distract the victim while the others focus on grabbing the PIN codes at ATMs. But these three had an extra touch: the third could steal your wallet, bank card and all.

The evidence in Vårgårda Commission investigation against the convicted based mainly on pictures and videos from cameras. — It’s a long process — and everything to find concrete evidence and partly to find identities.

This is done through international police collaboration, and then to get them arrested in his absence and wanted. All persons have been arrested abroad, says Detective Mats Wahlberg.

Theft [committed] by the three Romanians convicted occurred between March 2011 and February 2012.

But that’s not all you can find on this Swedish website. Look at this! 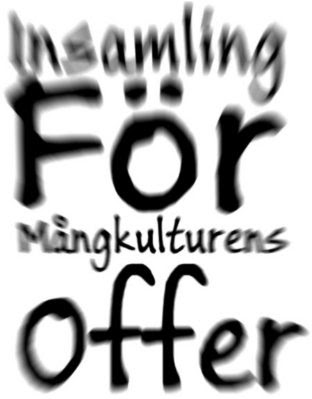 They have a separate page dedicated to helping victims of multiculturalism in Sweden, from which this image is taken. It’s a wonderful idea:

Obviously, if Sweden were a just place, there would be a whole bureaucratic department devoted to righting the wrongs inflicted on its real citizens — those whose families have lived in Sweden for countless generations — instead of the multiculti bulldogs who lie in wait for those who step out of line.

But this page is a good beginning for pushing back against the power of the state:

[I’m not sure what the DO is?? District Office? The place where you turn in these so-called offenders against the many orthodoxies of Sweden’s totalitarian Religion of Multiculturalism? I hope our Swedish readers can tell us about the DO.

Whoops! The Baron just told me it’s probably the “Discrimination Ombudsman”. Is that correct?]

On that page, they say:

First Our first project was a collection of Vicky Sjoberg, who had to make a deal with a Muslim girl who could not understand why she could not get to practice in a salon with a veil on. We collected over 5000 — to her, which was well on the way to her goal. Thank you all generous people.

We will fill this page as we carry out similar collections so people can see that they made a difference. We at Sweden Confidential have topped up this amount as PayPal to fees will not affect collection.

Clarifiying that last sentence, I think they mean that the admin at Sweden Confidential makes up the difference that PayPal charges in fees for these transactions. Good idea!

I suggest to all American bloggers fighting against the relentless onslaught of the p.c.’s cruel orthodoxies that they add this blog to their rolls.

If the fight is going to lead to victory, it has to step over the borders and engage with other people in other countries who are carrying on the same battle. For them, fighting without the shield of our First Amendment, it’s a far more dangerous battle and they deserve our encouragement.

Thanks to machine translations, the language barriers are dissolving yet the ever more important sovereign boundaries remain intact.

5 thoughts on “A Gypsy Vacation Tour in Sweden”