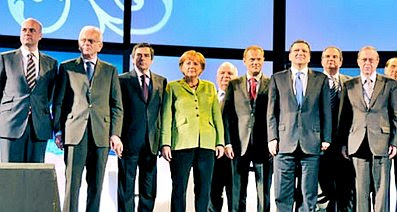 Up until fairly recently, the financial policies of the Eurozone were guided — however reluctantly and imperfectly — by the traditional fiscal prudence of the German government and central bank.

Today, however, the euro nations outside of Germany are facing a metastasis of debt that has become prohibitively expensive to maintain, especially for the PIIGS countries. Chancellor Angela Merkel now stands alone against a tide of opposition that urges a reckless slide into further “stimulus” and inflation. Ironically, the difficulties facing Ms. Merkel are to a large extent her own doing.

Many thanks to JLH for translating this article from blu-News:

The Spirits She Summoned

At the G20 meeting in Los Cabos, Chancellor Merkel is standing alone in a broad field. The heads of the other 19 states present are demanding in unison that Germany turn away from a conservative fiscal policy. The argument is as simple as it is false: Germany’s attitude is blocking the solution of the euro crisis. In truth, that is how they have made a scapegoat of the country which has until now preserved the Eurozone from collapse with the strength of its economy, its transfer payments and its guarantees in the amount of multi-billions. In fact, Merkel is now reaping the horrible results of her own policy of salvation.

In the current reporting on the G20 on Welt-Online, it almost appears as if an iron federal chancellor Merkel is standing athwart the rapacious world elite in its onslaught against the wealth of the Germans. And in fact, the impression of a predatory world elite is correct: France has elected a socialist president and his following by a great majority. Their promise is a policy of giving (to the French people), which is only possible if it is taken from somewhere else (preferably the Germans). François Hollande has no other solution for la grande nation. The same is true in Greece, regardless of whether the alleged conservatives or the rising left extremists are governing there. The first are bad, the second are worse.

And the same is true as well of Barack Obama, who presumably detects a threat to his re-election in the unresolved euro crisis and the resulting consequences for the world economy Accordingly, his solution in Los Cabos is eurobonds. The demand is simple for the American president. No American must guarantee the debt of ailing European states. How would it be for Obama’s chances of re-election if he suggested a common bond issues of the USA and southern Europe?

Who will save Europe if even Germany is broke?

What is really bad about this is that eurobonds would by no means resolve the problem, but without question make it worse. To be sure, there could be a short-lived “Hooray!” along with a wild climb in the markets. The hangover after a recent paper money binge, however, could have a stronger effect than everything that Europe has experienced in the course of the crisis. And then even Germany would be caught in the debt maelstrom made up of mismanagement, political failure and ivory tower social policies. But who will save Europe when even Germany is broke?

That is not what it is about in Los Cabos. No one there seems to be looking that far ahead. François Hollande just wants to parcel out his election presents as fast as possible; Barack Obama just wants to be re-elected in a few months. The goals of the other governmental representatives are just as egotistical and short-sighted. A true solution to the crisis would only be possible with thoroughgoing reforms. What caused the crisis and is keeping it in place now would have to be changed. For instance, the counterproductive composition of the Eurozone. But talking about the true reasons for the crisis is taboo. Small wonder that this crisis is lasting so long. And, worst case, will continue, even get worse again, if the “G19” are successful in their request to glorify all the mistakes which led to the crisis as means of their solution and to increase their effect immeasurably. That would go hand-in-hand with eurobonds: a further deviation at the nation-state level from the guiding principle in favor of out-of-control cycles of debt and transfers — compared to which, from the German perspective, the Treaty of Versailles looks like peanuts.

By the way: for anyone who wants to know what the German Left thinks of this issue , I recommend the most recent column by Jakob Augstein on Spiegel-Online. Under the title “Europe is Weimar” the publisher’s son opens up, to blend a spectacular lack of economic knowledge with dramatic ideological blindness and a striking ignorance of historical facts in a pamphlet of unsurpassable imbecility, the sad high point of which is that Merkel’s policy is swimming “against the current of economic and political reason”. Augstein hopes for a improvement from a new SPD chancellor beginning with the elections of 2013 — Europe has to “hold out” that long.

In fact, Augstein is correct that Merkel’s policy is frequently economically and politically irrational. It is characteristic, however, that the uninformed columnist is instead propagandizing for an SPD government as an improvement. And expects from it a policy that is economically even more irrational.

But what does Augstein have to do with reason? Anyone who says of himself that he goes “Left when in doubt,” must already be on bad terms with reason. It becomes especially clear in Augstein’s reference to the Weimar Republic, which by no means broke up because of an exaggerated savings policy, but above all else due to the rampant poverty of that time, which resulted from that very Versailles Treaty. The truth is that what Augstein is calling for — the complete sellout of German prosperity — was what once upon a time assured the victory of the NSDAP. Augstein is not only Left “in doubt,” he is apparently also “in-ebriated.”

Meanwhile, Angela Merkel is meeting in Los Cabos with those spirits she herself summoned up. So the picture of the lone defender of economic sense is really lame. Merkel’s own policy laid the groundwork that allowed things to go this far. She is the one who disempowered the Maastricht stability criteria, in order to save the beloved euro. And with that, she smoothed the way for the continental self-service store, which is now showing its ugly mug in Los Cabos.

There is a certain irony to that. Now the chancellor herself has fallen victim to the salami tactics she used for years on her own people. By little nibbles, new concessions to the debt vultures of Europe (i.e., socialists) were constantly sold to the Germans as having “no alternative.” Now it almost seems as if Chancellor Merkel is being caught and passed by her own policy. She is the victim of her own rhetoric, for instance, the daring claim that the euro is the guarantor of European peace. And just as Jakob Augstein is belaboring this nonsense, so now the political world elite are using Merkel’s bygone foolishness against her. It is possible that the chancellor is slowly beginning to understand what she has done in past years. Now that she is up to her neck in her own political offal at the global high noon in Los Cabos. And is in danger of slowly choking to death on it.

4 thoughts on “Who Will Save Europe When Even Germany is Broke?”