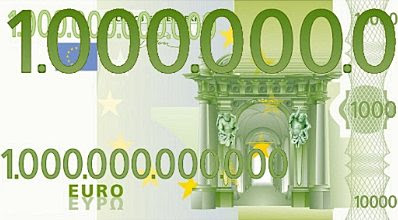 The European Stability Mechanism (ESM) is a proposed financial organization that would backstop the troubled economies of the Eurozone, utilizing the seemingly bottomless financial resources of Germany to guarantee the liquidity of financially weaker member states of the European Union.

The ESM is currently being challenged in the German constitutional court. What will be the likely outcome if the court approves the measure and allows it to take effect later this year?

The following article from Die Welt takes a speculative look ahead at what the possible consequences might be. Many thanks to JLH for the translation:

This is How Dangerous the ESM Can Be For Germany

Karlsruhe [constitutional court] is still pondering the urgent complaint against the ESM. But what happens if the judges wave the rescue package on through? The costs for Germans are beyond anything conceivable.

Investing in uncertain times is problematic for every private investor. Accountability in policy and in markets — a prerequisite for successful investing — is lost. Despite present confusion, certain scenarios can be envisioned.

One possibility: In order to secure itself against unwanted criticism, the court — after lengthy cogitation — will in September reject the urgent complaint against the European Stability Mechanism (ESM) and fiscal pact.

The ESM goes into effect immediately at the beginning of October. In the meantime, the interest on long-term Spanish and Italian bonds has risen beyond 7%. Both countries immediately apply for help through the ESM.

Germany’s Liability Rises from 27 to 64 Percent

Many Bundestag representatives are surprised that Germany is now liable for two-thirds of the €1.14 billion of the total capital of ESM/EFSF (European Financial Stability Facility). And then there will be the rescue packages for Greece, Ireland and Portugal.

In a parallel action, the German federal bank’s receivables in the Target2 system[1] rise spasmodically. In June, EU central banks owe the Bundesbank (ergo the German taxpayer) €728 billion (€699 billion in May). Spain’s Target2 liability alone rises by €63 billion to €408.

To assure liquidity for markets, the ECB amazingly awards the ESM a bank license. With it, the ESM can refinance and monetize debts without limitation. So the European stock markets boom for weeks.

While the US rating agency Egan-Jones has already withdrawn Germany’s AAA rating in 2012, now the large rating agencies follow in December. Germany’s refinancing costs rise rapidly, coming to be sure from a low level.

German Deposit Insurance Is Cashed In

Against this background, the December summit of the EU decides to optimize the fiscal pact and extend the time limits for achievement of a balanced budget for all euro states. Also, the basic structure of a bank union is established and the German capital base of the deposit insurance fund is immediately integrated.

The effect of these financial/political decisions shows in January 2013. At the Lower Saxony state elections, which are seen as an indicator of the Bundestag election in the Fall, the CDU/FDP again lose their majority. The SPD wins its twelfth state election in a row since the first Greek rescue pact in May 2010.

Chancellor Angela Merkel senses that the mood of the times has shifted far to the left, and is still only prepared to deal with the revenue side, She introduces a tax on gold and prepares supervision of capital transfers.

Thereafter she tries to anticipate the SPD and suggests a tax on assets, similar to the model presented by the DIW (German Economic Research Institute) — a forced levy on net worth above €250,000. In connection with 2011 census data, all properties can now be individually assessed at near market value and taxed.

The federal government justifies this measure with a fiscally urgent situation, as with the property tax law of 1913, the Necessary Sacrifice for the Reich of 1924 and the Equalization of Costs in 1952.

Many citizens do not understand why domestic taxpayers should leap to the aid of EU taxpayers and are included in collective obligations. A time of emigration begins, because pensioners do not make revolutions.

€250 billion aid is still available in the EFSF rescue funds for euro countries — for countries collectively, for aid to banks or for preventative credits. That also applies to EFSF aid for recapitalization of Spanish banks. The permanent rescue shield ESM will start.

The protective wall around the eurozone now amounts to €800 billion.

The international aid packet issued in May, 2010 by the EU, international currency funds (IWF) and from bilateral credits of euro partners comprised €110 billion.

To date, 73 billion euros have been paid out in six payments, of which 52.9 billion is allotted to the eurozone. Germany has contributed 15.17 billion, the IWF 20.1 billion.

Meanwhile, the European Central Bank base rate continues to sink. That raises the negative actual rate, which amounts to a silent confiscation of savings accounts. There is a startling result in the federal election of 2013.

The City of London and Wall Street regard themselves as the big winners, since their banks are saved and neither Great Britain nor the USA must take on obligations. Inflation takes care of the rest.

Erwin Grandinger is financial and political adviser at the EPM Group in Berlin.

One thought on “The ESM Rides to the Rescue”