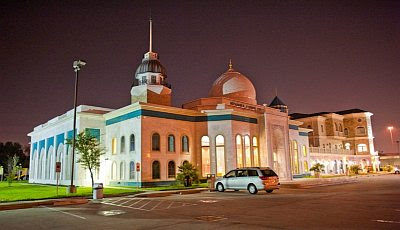 The rate of conversion to Islam among Hispanics in the USA has is such that a Spanish-language Institute of Islam has been founded in Texas.

The following report is from the Spanish-language version of Web Islam. Many thanks to our Spanish correspondent Hermes for the translation:

The institute for Islam is born

The Institute of Islam has been created in order to respond to the demands of a growing Spanish-speaking Muslim community in the USA. But their objectives are not restricted just to the North American country.

In the beginning, they could be counted on the fingers of two hands, but later they began to increase by the dozens. Now there are hundreds. The number of converted Latinos choosing Islam as their new way of life increases weekly.

The Institute of Islam, an initiative of the Houston Institute of Islam, was created in light of this massive growth of the Muslim community. The purpose of the institute is to fill the gap of the institutionalization of Islam in the Spanish-speaking world, keeping itself far from political issues and focusing on Islamic knowledge as an acceptable perspective for other monotheistic religions. Apart from this, the Institute of Islam will promote and call on Muslims to an interfaith dialogue in order to achieve a better understanding between the different faiths.

The teaching staff of the Institute of Islam, a body which is formed by scholars and researchers working on a doctorate and master’s degree as well as other professionals from the field of Islamic theology, which had already been organizing conferences, seminaries, talks and events in order to spread knowledge about Islam, turns now into an independent body which will focus exclusively on the Spanish-speaking community. This independence will not imply an opening towards other Islamic communities, and the same principles about dialogue and mutual understanding will be applied regarding the relationship with them.

Internet users can find on their webpage videos answering the basic questions about Islamic principles, creation, the Quran, the prophets, etc… More videos about related issues will be added weekly to the multimedia archive. There will also be such sections as a “public library”, a forum in order to answer to questions regarding Islam, and a section containing jutbas for the Friday prayers. In this section, volunteers wishing to offer their jutbas to be recited in other mosques will have the chance to do it. Other sections will be added according to other requirements.

The Institute of Islam invites the whole Spanish-speaking Muslim community to visit its webpage and to make criticisms and suggestions destined to improve its services.