Update: New links have been added.

In the wee hours of this morning I returned from an intensive three-day visit to Brussels. One of those days was spent in the Belly of the Beast: the European Parliament.

The conference honored the Danish historian Lars Hedegaard with the ICLA Defender of Freedom Award, which was presented by Mark Steyn.

It also launched the “Brussels Process” — an ongoing initiative involving numerous organizations and individuals united in their determination to protect free speech in the West from the danger posed by Islamic sharia. 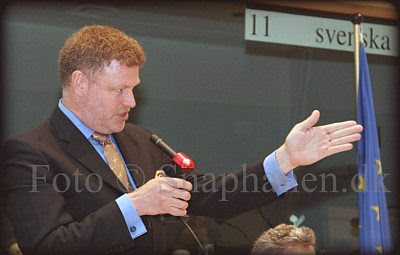 Monday’s events concluded with the signing and publication of the Brussels Declaration, which will be posted here shortly.

The conference in Brussels was the beginning of the Brussels Process, a continuing series of events that will strengthen free speech and civil liberties in the West, and provide an alternative to the notorious “Istanbul Process”. Numerous individuals and organizations will participate in the Brussels Process, and their efforts will be publicized here, at the ICLA website, and elsewhere.

We have had some problems with the audio accompanying the footage that was taken on Monday, but we expect to be able to post videos soon.

My deepest gratitude to everyone who made the Brussels conference possible.

Links to other reports and documents related to the conference (this list will be updated and expanded as new links come in, so check back here periodically):

German translation of the Brussels Declation

2 thoughts on “Beginning the Brussels Process”