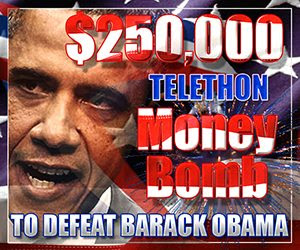 This post is dedicated to our commenter, Ex-Dissident, who doesn’t feel like celebrating the Fourth. Perhaps this will change his mind a little:

It’s a great idea! A 4th of July celebration to raise funds to defeat our Broken-Promise Prez.

FOOs — Friends of Obama — probably won’t see this get-together as ‘patriotic’, but it certainly is an honorable dissent for those of us who want Obama to finish off his Carteresque reign with the same one term in office for which Carter is so justifiably famous.

America is too small, with too many bitter clingers, to contain a super-personage of Obama’s philosophy and ambitions and sparkling intellect. Not only does he need a global canvas, but Obama would be better served — as would we — by moving on to head the United Nations. Perhaps he could oversee its move from New York to Brussels?

There is a live-stream broadcast of the telethon starting at 4:00 p.m. Eastern Standard Time (I’m surprised it’s not Daylight Savings Time, but perhaps it is?). At any rate, a great line-up of big names has volunteered — at least I hope they’re volunteers. Here’s a list of all the headliners who signed up to help.

In addition, Las Vegas’ KDWN radio was given as an alternative to the live streaming for those without fast connectivity.

Here is the online petition “One Million to Defeat Barack Obama”.

A few of the MSM outlets are following this. Here’s CNN’s take:

As of early Wednesday morning, the group said they had raised $75,000 toward their goal. The event broadcasts from Las Vegas beginning at 4 p.m. ET.

The MSM seldom links to anything on the right. So here you go: headquarters of a group who is fighting back:

By the way, this effort to Defeat Obama is an ongoing project. You can donate any time, not just today.

6 thoughts on “An Old-Fashioned Patriotic Telethon”