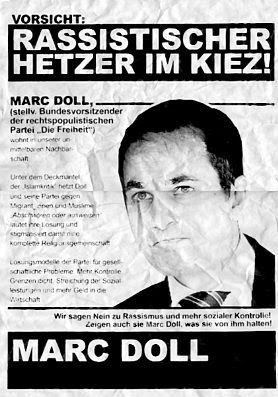 Marc Doll is one of the leaders of the new immigration-critical party Die Freiheit in Germany. Last Friday left-wing agitators put up handbills in his neighborhood threatening him with violence. The posters included Mr. Doll’s address.

JLH has translated an article about the incident, and includes these remarks:

Not only is the violence startling proof of the Left’s methods, Doll’s last sentence confirms a report that appeared in Gates of Vienna more than a year ago, to the effect that Angela Merkel was dragging the CDU precipitately to the left for the sole purpose of appropriating left-leaning voters. Now they are not so concerned with protecting their own citizens from the enemy on the flank they have moved to. Die Freiheit needs to stop being polite and being beaten up for it.

Does this remind anyone of what is happening here in the USA?

The translated article from Journalistenwatch:

Attack on Freedom of the Press: Death Threats Against Journalistenwatch Author, Marc Doll

In the past, Jounralistenwatch author [and vice chair of Die Freiheit party] Marc Doll has often criticized articles in Frankfurter Rundschau, especially the “legendary” columns of Mely Kiyak. Well, yesterday, the watch dogs of the Antifa were after his hide. There is of course no connection here, except an investigation of the level of political discourse in this land.

Here is his report which has also been filed with state security:

Yesterday, June 8, 2012, I arrived home near midnight. There I noticed several DIN-A3 posters pasted up with my picture, name, address and the caption “Caution, Racist Agitator in the Neighborhood.” Naturally I wanted to take them down, when a blond man about 25 years old and casually dressed came from behind me and wanted to stop me. “Hey! What are you up to! Hands off!” he shouted excitedly. At that point, for the first time I noticed other figures in the area. I asked what was going on. He said: “That’s a Nazi who collaborates with the NPD — Hey, wait a minute. Is that you in the picture?” “No.” “OK, that’s good, then. Anyway, he’s a Nazi who slams babies’ heads against the wall, BAM, BAM!” he reinforced it. And also: “If I see him, I will kill him and keep hitting him in the teeth with my brass knuckles until he stops moving.” Since he apparently had not recognized me, although I was standing a meter from the poster, I tried arguing, since it appeared that someone had completely misinformed and purposely incited this gentleman.

“You say he’s a Nazi, but you don’t sound any different. Isn’t there any other way to work out differences?” — “No, those are not human beings. They have no right to live!” he snorted in rage, and that was a signal to me that it was time to go before he called his buddies and made intention into action. There was just one thing left to do. “But why are you so angry about him? Do you live here in the street?” — “Yes, I live at 147.” Then I took leave of him with the promise that I would google all that. At any rate, I googled the address of the perpetrator: the Protestant-sponsored Treberhife Berlin, which engages in “aid to youth,” that is, one of the many typical social projects in Berlin whose products no doubt are criminals like this one.

The case was handed over to security services, which are investigating among other things character assassination, defamation, insult, and death threats.

Apparently we are once again in times when goon squads and terrorizing mobs on the model of the SA [Sturmabteilung, SS predecessor] are out after the lives of people who disagree with them. And governing politicians don’t want to know. So Germany has taken a large step in the direction of mind control, and has shown clearly that it cannot protect its citizens and, in the case of critics of the system, does not want to protect them.

The Berlin minister of the interior, who for years used to travel through the CDU districts and, with his intention to act strongly against leftist extremists and anarchists, collected signatures that first made him Berlin CDU chair and senator — he does nothing. Furthermore, there is no compilation of leftist extremists as there is for rightist extremists. And besides that, the gauge is set for maximum tolerance — the opposite of Henkel’s promised no-tolerance principle. Where Henkel was calling this leftist SA “red-lacquered fascists,” there is now no suggestion of that. It is even possible that Henkel learned from Wowereit that these ideologically hopped-up zombies can be very useful against political opponents. Whether Frank Henkel still has a score to settle with his former CDU colleague, René Stadtkewitz, or me as a former member of his district association, is unclear. At any rate, this shows once again the new image of the CDU as a malleable mass without compass or profile.

Because of the threatening situation, I must now move, and am spending my time until I do so in a secure place. My resolve has only been strengthened by all this, as has always been the case — that force and oppression only strengthen resistance. My respect for the resistance movements in the Third Reich and East Germany has increased and I am sure that history will vindicate me, too.

Perhaps we need to re-think and concern ourselves more with the CDU than with the Leftists. For, while the latter has members and voters who are hardly accessible to us, there are no doubt masses of CDU voters who even now still believe that this party is conservative, or even that it has in mind policies for the good of Germany. Exposing this deception could initiate a great many departures from the party. It would be a service to our country.

Note: Marc Doll’s address appeared on the original poster, but has been redacted from the copy at the top of this post.