Paul Weston uses Pierre Picaud’s recent essay about lily-white nature of the Diamond Jubilee as a jumping-off point for his own thoughts on the topic. 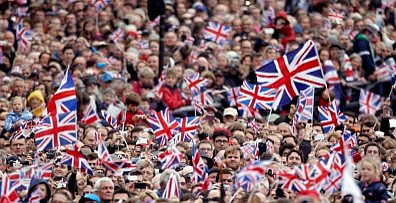 Pierre Picaud’s recent article Unity Through Diversity drew attention to the very obvious lack of ethnic minorities at the Queen’s Diamond Jubilee events. The BBC has a glorious tradition of focusing on non-white faces in crowds, but despite the best endeavours of highly trained apparatchiks from the BBC’s Ethnic Location Commissariat (ELC), their efforts sadly came to nought.

I cannot understand why there were so few blacks there — particularly integrated West Indians — but a Muslim lack of interest in all things British one can certainly understand.

When I tried to explain this to a liberal friend of mine, her reaction was worthy of the immediate attention of burly men in white coats with large doses of sedatives. She first angrily denied the undeniable, which is that the crowds lining the banks of the river Thames and the Mall were 99.9% white. Surely this is the mark of a mind not fully cognisant of reality or sanity?

She then said that even if it were true, she had no doubt the Muslim communities were celebrating the event in their own multicultural manner. Her response to my questioning the patriotism of our Muslim communities was the predictable accusation of racism, bigotry and prejudice. My liberal friend prefers to remain ignorant on matters Islamic, presumably because actually to become aware would necessitate losing her liberal viewpoint and becoming in her own eyes — gasp! — a racist.

Thankfully, she does not need a bigoted old racist like me to explain the lack of Jubilee celebration beards and burkas in the centre of our utopian, multicultural city. It is so much better straight from the horse’s mouth, so courtesy of some excerpts from an article at Stand Up 4 Islam here’s why Muslims so resolutely declined to participate:

Bismillah-hir Rahman-nir Raheem (in the Name of Allah, the Beneficent, the Merciful)

If you’re in the UK, you’ll know that we are heading towards the Queen’s Jubilee celebrations…. Muslims have been given Eid for celebration by Allah; there is no need for other celebrations and certainly it is haraam to imitate the non-Muslims.

There is no system of monarchy in Islam, no kings or queens, no royal family… Why should one particular family be held up on such a high status for generation after generation? The same family that has done nothing to help those suffering in Syria and in Palestine… Why celebrate then, the Queen’s Jubilee? What’s the justification for this?

Next, what is it actually that is being celebrated by the Queen’s Diamond Jubilee? Sixty years of the reign of the monarch of Great Britain… can you point out the benefit that this monarch has brought to Muslims? Can you point out how the Queen… has submitted to Allah? What do we owe to this Queen that warrants us to celebrate her reign?

Next, why engage in activities that are really for those who aren’t Muslim? Why imitate the kufaar? The Prophet (blessings and peace of Allah be upon him) said: “Whoever imitates a people is one of them.” [Abu Dawud]

Muslims need to stop engaging in non-Muslim festivities, parties, the giving of presents, sending cards, giving greetings. This is not Islamic so don’t have one foot in Islam and one foot in something else. Instead, celebrate Islam — you have two Eids and can make the most of this. Be devout and upstanding Muslims that non-Muslims can respect for their Islamic values and morals and beliefs. If you don’t then what do you stand for?

Muslims need to come to terms with an Islamic identity and the fact that we are ordered by Allah not to imitate the kuffaar — the non-Muslims. If anything, the non-Muslims have much to gain by imitating Muslims and learning from Muslims. We should be the role models, not the other way round. How will non-Muslims learn the errors of their ways, if we imitate them? Also, if we imitate the non-Muslims in the things they do, then where do you draw the line? The fairest and most just way is to not engage in festivities that are not Islamic.

Muslims… you need to act like Muslims and BE Muslims, following Islam and showing everyone the beauty of Islam.

Oh dear. This does not bode well for future “Community Cohesion” methinks, when much of the above verges on the pathological. For example: Can you point out how the Queen has submitted to Allah? What do we owe to this Queen that warrants us to celebrate her reign?

What an extraordinary statement. If the Queen has not submitted to Allah, then Muslims have no time for the Queen! This might sound peculiar to liberal/left whites but not to those who understand Islam. It is very simple — Islamic Supremacism is real, so such a statement is perfectly reasonable to many Muslims who understand that the Queen and her subjects are deemed unworthy in the eyes of Islam until they submit, flee or are killed.

There is much else to be said about the Stand Up 4 Islam article, but it can be adequately summed up in just a few words. Supreme Arrogance; Base Ingratitude; Sedition; Treason; Racism; Supremacism and Apartheid.

So how to understand this? The total lack of a visible Muslim presence can only lead us to assume one of two things, neither of which is good. The first is that ALL Muslims think like this; the second, that many moderate Muslims actually wanted to attend but feared recrimination from their more fundamentalist and bearded brethren if they did so.

None of this really matters if Muslims were to remain a small minority on our overcrowded Island, but this is not the case. Demographers predict the combination of mass immigration, family reunification and high birth rates will lead to a Muslim majority in the not-too-distant future.

When this point is reached — if not before — I predict a total breakdown in society along with the potential for the horrific violence we saw so recently when Yugoslavia fractured along racial and religious lines. Left/liberals might not want to hear this, but the Muslim non-participation at such an important national moment is already a signal of a racial and religious fracture. Future physical clashes are now far more probable than improbable.

Only then will the liberal/left finally realise what they have done. Under the deliberately destructive edicts of Multiculturalism, they instigated, nurtured, protected and developed an ideology with a core belief system absolutely opposed to every core belief held by the liberal/left themselves regarding women’s rights, homosexuality, religious supremacism, racial supremacism, apartheid, democracy, diversity and equality.

As I remarked earlier, the liberal/left are in dire need of the men in white coats.

5 thoughts on “The White Diamond Jubilee”