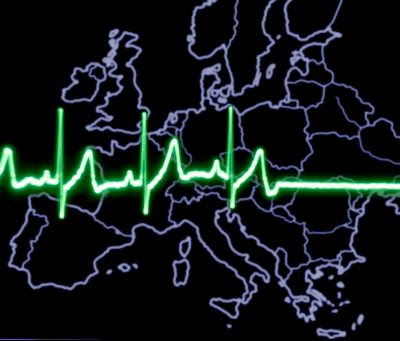 With Greece in austerity-driven chaos and poised to leave the Eurozone, Spain is next in line. The Spanish banking crisis has forced Spain to ask the European Union for a major bailout. The country seems to be beginning its own plunge into fiscal ruin.

Many thanks to our Spanish correspondent Hermes for translating this article from Periodista Digital:

Spanish bonds and the risk premium are looking into the abyss

Some think the economic red line is about to be crossed.

(Image caption: The Spanish bull on his knees)

Compared to German bonds, the risk premium offered to investors by ten-year Spanish bonds is still rising, and as of 14 June 2012 has reached a maximum of 551 basis points, with a bond value which borders on 7% (rescue level), a new maximum since the introduction of the euro, against the 529.7 basis points from Tuesday’s close.

According to Bloomberg, the yield for the ten-year bonds has reached a maximum of 6.998%, while other platforms like Tradeweb placed it above 7%, as recorded in the Financial Times.

However, after reaching these levels, it seemed to stabilize at around 6.95%.

Thus, the risk premium for Spanish bonds rose ten points after the rating agency Moody’s downgraded the evaluation of Spanish debt by three steps, going from ‘A3’ to ‘Baa3’ with negative outlook, leaving it just one step removed from junk bonds.

As announced yesterday by the rating agency in a statement, this decision reflects, among other things, the rescue of the banking system requested by the Spanish Government, the “very limited” access to financial markets and the weak economic situation of the country.

The Spanish sovereign debt market felt deeply the downgrade applied by Moody’s to Spain as well as the possibility that both Italy and Spain may need a large-scale rescue by the European Union, analysts at the Danish Saxo Bank said.

Danish bank experts indicate that both countries may need financial assistance because of the high levels of public debt and the low credit quality of their banks, and estimate that they could go to the EU for help within six months.

To the insecurity created by the uncertain outcome of the elections to be held in Greece on Sunday, experts from Saxo Bank added Finland, which is also experiencing serious problems that could force its exit from the euro as well.

Ireland, Portugal and Greece went for help to the European Union when their ten-year bonds exceeded the 7% on the secondary market.

2 thoughts on “Flatline Europe: Spain is Next”