This essay below by our Norwegian correspondent The Observer describes the current political and cultural situation in Norway and other Western nations. 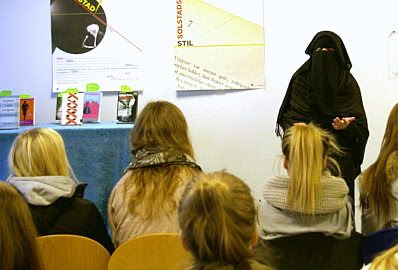 Empirical Data vs. Ideological Theory
By The Observer

No one has the ability to look into the future, and hence no one can accurately predict what it has in store for us. All we can do is to look at present and historic trends and draw upon lessons from the past. When we add all these factors together and look at them in a truthful manner, we gain a fairly good idea of what to expect. When undertaking research projects, which in a way is almost like gazing into the future, there is only one method that we can rely upon, and that is a strict scientific approach which focuses solely on well-established ethical principles and whose ultimate goal is to uncover the truth unaffected by any other considerations.

Unfortunately, there are some who choose to employ unethical research methods in which ideological considerations are permitted to influence the outcome. Needless to say, this is a futile method which can only produce incorrect conclusions. The consequences of relying upon incorrect findings will in most fields of expertise result in undesired outcomes. In medicine, for instance, the act of prescribing incorrect medication or employing incorrect surgical methods can lead to devastating consequences and, in worst case scenarios, death. In engineering, erroneous calculations can result in serious accidents and potential catastrophic structural and mechanical failures.

The only way of judging any research is to subject it to critical analysis, which of course is an integral part of science. This means that anyone attempting to predict possible future scenarios will have to subject his or her thesis to critical scrutiny in order to determine its probability. It goes without saying that the more known factors the researchers can rely upon, the more accurate their conclusions are likely to be. The odds of reaching a meaningful outcome are a lot higher if the known factors comprise 90 percent and the unknowns 10 percent. And this is why it is essential to amass as much knowledge as possible before attempting to present a meaningful conclusion.

We have witnessed enormous technological advances in the last hundred years that can be directly attributed to science. However, despite the enormous technological progresses of the 20th century, there is still a strong reluctance within certain political strata to embrace scientific research methods on various topics. This is especially apparent in Norway at the moment, where supposedly prominent intellectuals are busy ridiculing individuals who are using strict scientific approaches to predict future demographic, financial and societal changes. This aversion to embracing honest research is disappointing, because the willingness to use such methods should be promoted regardless of its findings. The pursuit of truth is a noble goal.

When examining this unnatural aversion to honest research it becomes evident that there are powerful individuals who don’t want any critical light to be shed on sensitive topics such as Multiculturalism and Islam. This unwillingness to permit proper scrutiny on these subjects tells us a great deal. It tells us that these individuals are aware that an honest examination will arrive at conclusions that are at odds with their own ideology, and which could lead to a drastic shift in the ideological climate. There can therefore be no doubt that the desire to suppress honest research is deeply rooted in their ideology.

Let’s go through some of the known facts concerning these topics, and then have a look at the likely effects they will have on my native Norway and Europe as a whole.


It is an undeniable fact that the non-native Norwegian population has grown from 0 to 12 percent in just over 40 years. It’s also an undeniable fact that the ethnic Norwegian population is declining due to low birth-rates. The only conclusions that can be drawn from this knowledge is that if these trends are allowed to continue, ethnic Norwegians will at some stage in the future become ethnic minorities in their own country. This scenario also applies to many other Western European nations.

We also know that non-Western immigration is costing the Norwegian taxpayers billions of kroner each year. The SSB (the bureau of statistics) admitted recently for the first time that if current trends persist, by the year 2020 the Government’s expenses will exceed its revenues. The SSB also concluded that the entire oil fortune (the pension fund) will be gone by 2040 if drastic measures aren’t implemented. In other words, if current immigration and entitlements trends continue, Norway will eventually face bankruptcy. This is also a scenario that many other European nations are facing. One could in fact argue that Multiculturalism has contributed greatly to the current financial crisis which is slowly dragging the continent into the abyss.

It is also an irrefutable fact that non-Western immigration in Europe is a result of liberal asylum and family-reunification laws. The UDI (The Norwegian Department of Immigration) admitted in the mid 2000s that a mere 5 percent of individuals who apply for political asylum in Norway are in fact genuine refugees, which means that the Norwegian authorities are silently condoning illegal immigration under the guise of political asylum. If they wanted to, the Norwegian authorities could, without breaking any international conventions, reject the remaining 5 percent, as Norway isn’t the first safe port-of-call for these refugees. Genuine refugees have to apply for political asylum at their first safe destination.

It is also proven beyond a shadow of a doubt that non-Western immigrants are over-represented in crime statistics, and that they in most cases chose to target indigenous Europeans. It’s also a known fact that there has been an astronomical increase in violent crimes in Europe in recent decades, and that this is largely due to immigration.

It has also been definitively established that ethnic tensions are prevalent in multicultural societies. In Oslo, which is the city with the highest immigrant population in Norway, white flight is a very real problem. Ethnic Norwegians leave areas where there is a high influx of non-Western immigrants. The main reasons for this indigenous exodus are insurmountable cultural differences and the desire to live in areas where there is a large population of ethnic Norwegians. There are countless of examples of ethnic Norwegian kids being targeted and physically assaulted by immigrant kids because of their ethnicity. This trend unfortunately also occurs in dozens of other European cities, many of which are a lot worse off than Oslo.

Concerning the religious problems facing Europe, or more truthfully the Islamic problem Europe is facing, it’s important to remember that Islam’s ultimate goal is to conquer wherever it goes and subject everyone it encounters to Islamic law (the Sharia). This is mandated by the Koran, and Muslims are expected to carry out this command. This is not necessarily the goal of every single Muslim, but it is important to keep in mind that even they have chosen to embrace an ideology which despises Western values and which at best can only be described as totalitarian.

Another known fact is that Muslims are gaining strength and becoming more influential in Europe. It’s also worth noting that a large portion of European-based Muslims are strong supporters of the introduction of Sharia, and that there is an abundance of evidence proving that they are more than willing to put brute force behind their demands. In the past few decades we’ve witnessed a growing trend of intimidation, both physically and mentally, of individuals who speak out against Islam. People have been killed in Europe for having ‘insulted’ Islam and offended honour of the Prophet Mohammed. Many people in Europe today live with 24/7 personal protection because of a very real fear of violent reprisals from Muslims.

There is also a concerted and well orchestrated campaign led by Muslims to pressure Europe into adopting Islamic customs and traditions. The Islamic nations of the world are hard at work encouraging the Western world through the workings of the OIC to give in to the ever-increasing demands of Islam. They want Europe to adopt legislation that makes it a criminal offence to insult Islam, and they want the universal declaration of Human rights to be subordinate to the Islamic Sharia. This should be a source of grave concern for the elites in Europe, as the OIC is the collective voice of every single Islamic nation in the world. This is what Muslims want, and they are putting their trust in the OIC to see the job through.

It’s also a known fact that since its inception Islam has been a conquering and marauding force with millions of lives on its conscience. We would do well to remember that Islam has made numerous violent incursions into Europe during its bloody 1400-year history. Those who try to trivialize this or sugar-coat Islam’s past are ignorant or simply lying. When we start looking at the teachings of the Koran, we begin to understand the reasons behind Islam’s many attacks on Europe and other continents in the past. Islam’s relentless effort to gain influence in Europe is part of an ongoing campaign which stretches back more than a millennium.

These are just a few of the factors which outline the numerous problems caused by Multiculturalism and Islam in Europe. Notice also that these factors are not subjective arguments concocted by opponents of Multiculturalism, are verifiable and irrefutable facts.

Yet despise this overwhelming amount of empirical data that completely rejects the sustainability of the utopian multicultural society, despite the unwillingness of Islam to embrace Western values, there are those who have decided to ignore the obvious conclusions and instead ridicule anyone who dares to look at these conclusions in an honest manner, and who warns of the potentially devastating consequences of not paying attention to the empirical data at our disposal.

Because when we analyse these factors in an honest manner, it’s impossible not to notice that we’re heading for disaster. There is no logical way of claiming that the consequences of today’s trends are going to have a positive effect on Europe, nor is there any empirical evidence which would suggest that current trends are somehow going to magically correct themselves. It is actually possible to condense the known factors and put it into a mathematical equation:

Some people deliberately close their eyes to reality and refuse to look at trends in a truthful manner. But their arguments simply don’t stand up to critical scrutiny, as the empirical data completely reject their conclusions. When pushed on these issues the only thing they are capable of is presenting non-empirical arguments which have no basis in reality. They must be pushed repeatedly on these issues until they finally start to see the light.

The truth of the matter is that when we take all the information we have at our disposal and employ scientific research methods in order to examine it properly, it is very clear that we are heading down a path towards turmoil and civil unrest. This knowledge should be treated in the most urgent manner, and it shouldn’t be ridiculed or subjected to any form of censorship. The logical conclusions of this analysis should be listened to, and proper measures should be taken to avert the impending cataclysm.

It’s imperative that the elites in Europe start treating empirical data more seriously and take a good look at their continent’s history. This is essential in order to better understand its future. Only by looking at historical events, examining current trends, studying the Koran and listening to what representatives of Islam are telling us can we avoid being incorporated into the Islamic world.

We have to be alert, and we have to be willing to stand up for our way of life and our freedoms. It’s not necessary to look into a crystal ball to see what the future holds. All we need to do is to take an honest and truthful look around us and the options will start to become very clear.