Schools in the English city of Birmingham are now so culturally enriched that teachers require interpreters if they are to communicate with their charges — never mind educate them.

Many thanks to our Spanish correspondent Hermes for translating this article from Alerta Digital. The same topic was reported a few days ago in the British press: 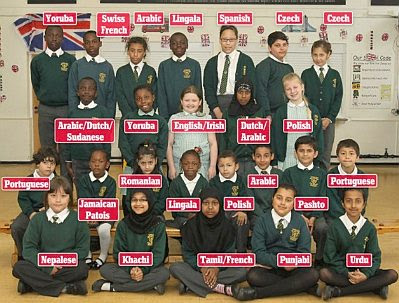 
Its name dates back to the country’s glory days, but the Martyrs School is a true symbol of the multicultural sewer UK has turned into. The pupils of this school located in Sparkhill, Birmingham, speak a total of 31 languages, some of them as exotic as the Afrikaans or Tamil.

The newspaper Birmingham Mail revealed that more than 120 languages are spoken in the schools of the town, something which makes it difficult for the pupils both to integrate well, and also to reach a good level of academic achievement.

In spite of its being a Catholic school, the majority of the pupils at Martyrs are Pakistanis. Urdu or Mirpuri is the most used language by them. The issue reached a bizarre level when it came to light that school personnel need translators in order to be able to communicate with pupils.

The British Government’s latest statistics point out that pupils having English as their mother tongue are in a minority in more that a quarter of all schools in Birmingham.

The Department for Education indicates that the majority of the students in elementary and secondary schools from the 430 centres registered in the town on a daily basis use a language different from the country’s official language.

The Martyrs School is an example of the cultural reversion the country suffers. From having mainly Catholic pupils in the 1950s 1960s, it currently has a majority of students who follow the Islamic faith. Only 11% of students are now Catholics.