In an appropriate follow-up to last night’s report by Bewick, our English correspondent Pierre Picaud discusses what the Diamond Jubilee celebrations reveal about Modern Multicultural Britain. 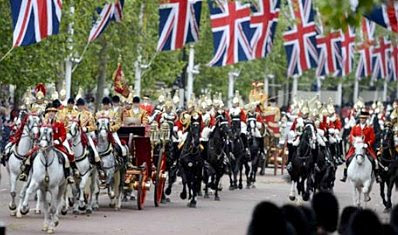 “Unity through Diversity”?
by Pierre Picaud

A casual observer opening up the current pages of Britain’s anaemic right-wing press is greeted by an unprecedented expression of optimism and positivity.

The source of all this rapture is the jubilee celebrations presently underway, which mark the diamond anniversary of the ascension of the United Kingdom’s most dutiful long-suffering monarch: Elizabeth II.

From Melanie Phillips in the Daily Mail, to Ed West in the Daily Telegraph, to Fraser Nelson in The Spectator, there is a palpable sense of relief, joy even, at what is deemed to represent an unparalleled display of patriotism and national loyalty, the likes of which have not been witnessed in Britain for a generation.

As a feast for the eyes and an amazing technical accomplishment, the still on-going celebrations which began with a mesmerising pageant on the River Thames in London and continued last night with a gala concert on The Mall in front of Buckingham Palace, the events are a wonderful success.

(This essay’s title is drawn from the very moving speech given by Prince Charles, in recognition of his mother’s tireless service, at the conclusion of last night’s performance.)

The numbers attending have been dizzying to an extent beyond normal human comprehension: with as many as 1.2 million people lining the riverbank for Sunday’s pageant, mostly in the pouring rain.

The whole spectacle has spawned a new and surprising narrative of national unity and togetherness, which has come as a surprise and a relief to those commentators who had previously found themselves perturbed by and decrying the perceived fragmentation of British society.

Here were the public in central London, in their millions no less, unabashedly displaying and celebrating Britain and Britishness; with a Union flag hanging from every lamppost and waving from every hand, and not a sight of that hated blue-and-yellow EU monstrosity anywhere…

There is, however, one slight problem with this picture that no one is mentioning. A small boy tugging at his mother’s coat at the Emperor’s parade, aching to express a truth that can perhaps only find the light of day at somewhere like Gates of Vienna.

With the exception of very small numbers — that are in essence statistically irrelevant — whether you like it or not, pretty much everybody you see in the multitude gathered in London is white.

To understand the significance of this, one needs to know the demographics of the city.

Greater London, the largest conurbation in Europe, is usually divided into two geographic zones: the suburban ‘outer ring’, and the metropolitan ‘inner city’. London’s inner portion has been majority immigrant territory for some time, and as the years progress even the outer ring is approaching parity between immigrants and native inhabitants.

Thanks to publicly subsidised housing, with the exception of a few isolated pockets the centre of the city is mainly immigrant-dominated.

A visitor to the majority of the primary schools of the boroughs which lined the river down which Sunday’s pageant rowed, would see that the ethnicity which formed 98% plus of the audience for the jubilee, is represented as a rule in less than 10% (in many cases less than 5%) of the demographic makeup of the pupils of those schools.

Where then, one is forced to ask, were the parents of the rest of all these children, presumably a convenient short stroll away from demonstrating and celebrating their “Britishness”?

Why did they not seize this simple and convenient opportunity to declare themselves full, happy, and enthusiastic members of our grand multicultural society, when the vast majority of attendees had largely travelled much great distances in order to do so (according to train company reports)?

The cameras of the BBC, usually anxious to present a picture of multiracial harmony, and whose coverage of the events has been broadly panned as inane, clearly struggled in desperation to find non-white faces in the crowds.

Their failure to do so was even more stark as they linked to outside broadcasts of commemorative street parties up and down the country, particularly in places like Luton, where it was patently evident that wherever the English were in the minority only the English were doing any celebrating at all.

Where were the others? Our fellow “Britons”?

Those perfectly capable of coming out in their tens, even hundreds of thousands; for publicly funded Hindu Diwali celebrations in Trafalgar Square, or the Afro-Caribbean yearly carnival in Notting Hill (policing cost to the British taxpayer: 34 million pounds a year), or Islamic Eid “festivals” in East London; were all conspicuous by their virtual absence.

This is not an Islamic issue, or even one truly of colour or race. It would have been surprising if any significant proportion of those celebrating this jubilee weekend were Poles, or any of the nearly two million Eastern Europeans who have come to the UK over the last decade, either.

The predominant skin colour of those attending the jubilee has merely provided visual confirmation of how comprehensively the social model into which decades worth of political and financial capital has been invested in Britain has failed.

To be clear: the English (unlike the Scots or Welsh to any similar degree) were told, not outright, but tacitly and subtly; through policy, policing, changes to educational syllabi, deliberate alterations to the cultural framework etc., that Englishness — their identity — would have to be subsumed, altered, diluted, undermined, even to the point of being questioned as having any true cohesive validity.

This was a necessary evil. It had to be done in order not to alienate or marginalise the millions of immigrants arriving mostly in the English portion of Britain, who “yearned to be part of our society” and to make a better life for themselves into the bargain.

Though awkward, this essential transformation would be worth it, and would in turn bring about a fresh paradigm of nationality.

Britishness would be elevated into a new and inclusive form of meta-identity that all could participate in and be welcomed by. A mélange-identity uniting and encompassing all comers.

This new paradigm in turn would have its own founding myths, as do all attempts to unite disparate ethno-religious communities. The myth that a person newly arrived from East Africa was “just as British” as any Englishwoman who might be able to trace her family back to the Norman conquest. The myth that one could achieve, “Strength through Diversity.”

Furthermore, these myths would be reinforced by numerous means.

Television “idents” and programs for example would subtly attempt to communicate harmonious multi-cultural unity, as in this collage. (Compare in particular the ethnic makeup of those attending the faux street party at the end of this BBC jubilee ident with those in this CNN report of the genuine article.)

And thousands of farcical local council propaganda posters on buses and billboards would show a similar multitude of grinning multiracial faces, regardless of the theme. The golden rule of course being that the more outnumbered the actually English people in the photograph were, the more strained and enthusiastic their smiling had to be.

(This collection of picture exhibits shows the usual progression from the London boroughs of: Southwark, to Camden, to Newham, to Hackney, to Lewisham, to Tower Hamlets.)

This effort was so total and all-encompassing, that it was easy thoughtlessly to fall for it and assume it to be in part true. Particularly as every effort has been made, either by immigrants themselves or by positive discrimination, to advance newcomers through the professions so that they are now over-represented in medicine, media and the law.

Notwithstanding the fact, that the promotion of compulsory allegiance to this narrative has shifted over the decades from a gentle socio-political prodding, to a state of affairs where any who dare to forcibly question it in public face imprisonment.

But it was only required to force allegiance to this mind-set from natives… not, of course, from those who came; that would have been racially presumptuous and monstrously unfair. The one was supposed to magically facilitate the other.

But patriotism and national loyalty are based on the individual’s core willingness to sacrifice; and in modern Britain the balance of sacrificial expectation was set right from the start.

The state had to sacrifice to provide the benefits that would be received by the newcomer, while the immigrant was required to sacrifice and surrender, in exchange for the comforts and opportunities of their new life, well… what exactly?

In the interests of generating a nationally loyal harmony, every multicultural effort has been made to bend over backwards in the promotion of togetherness and inclusivity, up to and including the sacrifice of many essential characteristic elements of a thousand years of English and British history; right down to the abandonment of the most basic things like the promotion of our own language on the one hand, or judicial protections like double jeopardy on the other.

The children of the English, in the schools for which their parents pay through their taxes, are now compulsorily taught not the glories and accomplishments of their nation’s past, but primarily and chiefly its inequities, oppressions and “evils”.

This did not happen by chance. It was a transaction. A deal.

The accurate depiction of Britain’s majestic and impressive history for example, was to be abandoned in exchange for something. Deliberately disowning historical reality (like a thousand and one other such national cultural renunciations) was intended to provide an inclusivity that would in turn guarantee the delivery of an attached, benign and loyal immigrant population.

So where were they then: when a golden and simple opportunity presented itself for the demonstration of their new Britishness? Nothing jingoistic, or confrontational, but a four day series of events designed from the start to be achingly inclusive and multicultural.

Frankly? Our new fellow-Britons were nowhere to be seen.

When the chance arose to show how successful this theory of mutable national identity in fact was, in whose name so much has been forcibly lost, the results are startling — and, for those with an eye to the future, more than a little alarming.

The paradigm hasn’t changed. Our social engineers are either liars or fools.

People always only feel a genuine allegiance and loyalty to a place with which they have a pre-existing hereditary, historic or geographical investment.

The newcomers want no part of it, thank you very much.

And to be clear: the kind of sacrifice under discussion in this essay is not mounting the lip of a trench to advance into machine-gun fire in defence of your nation’s values or borders, but taking a couple of hours out your bank holiday weekend to stand in the rain for a bit with a flag.

This is the grim harvest we must expect from multiculturalism’s insistence that pre-existing identities should be encouraged to flourish rather than to adapt.

The British, and more chiefly the English, have received nothing in return for their sacrifice: of identity, of tradition, of heritage, and of culture.

They’ve been conned. Duped. The promised transaction hasn’t taken place: there will be no unity in the United Kingdom, and no guarantee of security as a result.

We will not see the likes of this weekend again.

30 thoughts on “A Mess of Pottage”