Update: This post was originally published on Saturday May 12, and then later boosted. Scroll down for more recently published posts, including Fjordman’s latest essay.

The current state of Britain (and all of Western Civilization) is reminiscent of an observation by Riddley Walker in the eponymous novel by Russell Hoban. Upon seeing the “shyning of them broakin machines” at Fork Stoan, Riddley grieves: “O, what we ben! And what we come to!”

The Three Cs
by Takuan Seiyo

Consider the case of the nine “Asian” men recently convicted for snaring, drugging, kidnapping, pimping and gang-raping 50 young British girls, over ten years. These Asian men, all of them Japanese Buddhists from Kyoto: 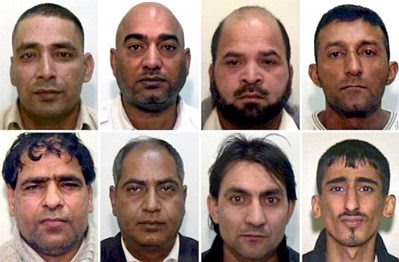 
As has now transpired, police, public prosecutors and social workers knew about these blood-curdling abuses since 2002, and ignored them because they feared being called racist. They ignored the complaints of a 15 year-old who told them she was being driven all over town to be raped by up to five men every day. Singled out, as she relayed, because she was white, vulnerable and under-age.

And the pleas of another one who described in a six-hour interview with the police her multiple rapes, by up to five men a day, and provided DNA evidence too. And a mother whose three daughters were being raped regularly by the Japanese Buddhist Asians, and who complained about it multiple times to the authorities, to no avail.

Racist police action averted, thankfully, for ten long years, I am particularly fond of Assistant Chief Constable Steve Heywood acknowledgment that officers could have dealt with the case “better than we did,” and that “The issue here is genuinely about vulnerability. It just happens that they are Asian men. In no way did we sweep it under the carpet.”

Let’s move on from the hopeless zombie cops to a British historian who is full of hope. “If we are to make this highly diverse society work, and I desperately hope that we do,” said David Starkey, PhD, CBE, FSA and a richly remunerated darling of Britain’s broadcast MSM, “what we should be focusing on is the astonishing record of change.”

The esteemed Dr. Starkey avers that these “Asian” kuffar-pedophilia specialists have been acting “within their cultural norms.” Converting them to the British norms is a matter of explaining that the history of women in Britain was once “rather similar” to that in Pakistan, but now it has changed.

Like the amazing change from Elizabethan England’s honor killings of women, clitoridectomy, acid disfiguration, rape followed by lapidation of the victim, forced servitude, forced confinement in dress and abode, to the ’astonishing modern-day phenomenon of the Right Honourable Jacqui Smith, Zombie Island’s erstwhile Home Secretary, renaming Muslim terrorism “anti-Islamic terrorism” and stating that “Terrorists are criminals whose victims come from all walks of life, communities and religious backgrounds” after Bilal Abdulla, Mohammed Asha, Kafeel Ahmed, Sabeel Ahmed and four other Saxons were arrested in connection with the Glasgow International Airport and London West bombings, in 2007. But that was before it transpired that the Rt. Honourable Jacqui charged her husband’s hotel porno films and her family’s Redditch home to the British taxpayer.

Desperate hope and astonishing change, as Dr. Starkey would say. And he passes for a bold conservative in Zombieland — but what do I know? David Cameron does, too.

For a thinker, discussing or criticizing individuals is trivial. I have no ill will toward Dr. Starkey, nor much interest. What fascinates me is how and where he, or any other member of the British intellectual elite, has come by his opinions. Why have the Anglo-Saxons and other ethnies of Great Zombieland turned into contemptible wusses shuffling in Eloi slippers toward their own extinction?

Remember that this is the people that only 60 years ago produced men in relative profusion who led commando operations in the guise of Greek shepherds, switching when needed to German uniforms in order to kidnap German generals. 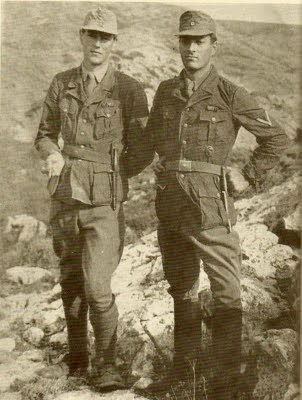 
Or led commando beach landings against German crack troops to the sound of bagpipes while outfitted with old hunting rifles and fisherman’s sweaters. 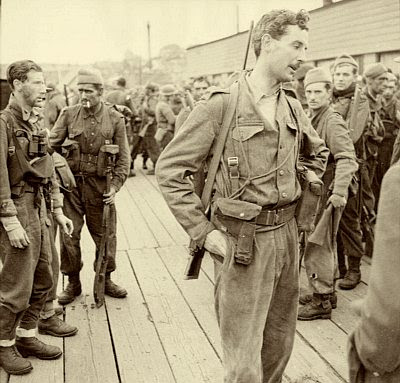 Simon Fraser, Lord Lovat, after returning from the Dieppe raid (August 1942). Sweater and grandpa’s hunting rifle visible, but personal piper Bill Millin, a hero in his own right, not in the photo.


Or led similar raids while playing the bagpipes themselves, with broadsword in hand. 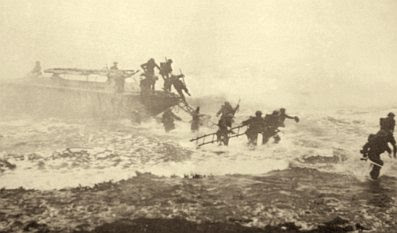 
Or commanded a British-Sudanese-Ethiopian guerilla force of 1700 that took the surrender of 20,000 regular Italian soldiers. After having trained in the 1930s the kernel of the future Israeli Army for Palestinian Jews’ sole defense against Arab aggression, but before training and leading a long-range penetration guerilla force (1943-’44) that stopped the Japanese cold in Burma and, eventually, prevented their invasion of India. 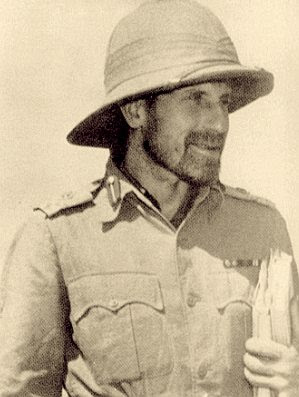 
Or just stood resolutely, with exemplary stoicism, as civilians, in the Battle of Britain. 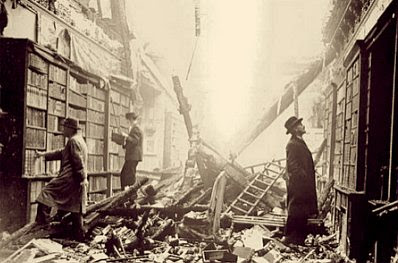 
Is there a clue to this metamorphosis of Britain in Dr. Starkey’s having been born to strict Quaker parents? His, as per Wikipedia, “excessively enthusiastic advocacy of [sodomite] promiscuity”? For lack of deeper familiarity with the hoping historian, I prefer to comment on the lauded school he attended as a youngster, Kirkbie Kendal, founded 1525.

Now the motto of Kirkbie Kendal is “Care, Courtesy and Consideration.” It strikes me as a little on the nebbish Little Lamb side — and that’s in a country where Christianity is practically gone, but the meekness remains.

Why not “Class, Chivalry, Confidence”? But even that is passé. Great Britain has been importing brutal, hateful barbarians by the tens of thousands per year for decades. The barbarians now openly prey on the young daughters of the rightful owners of Great Britain, and the authorities avert their gaze.

Racism (to clarify, white “racism”) is a punishable offense even for grade school children, but systemic mayhem and malfeasance by the alleged victims of racism — and that comprises personages as high as Scotland Yard’s “Teflon Commander” Ali Dizaei — have become untouchable. Not to speak of the legal purse seine that punishes resisters to violent crimes on a par with the criminals who commit them.

If there were sentient humans with normal psyches at the head of Kirkbie Kendal School, should they not have changed their once-appropriate three-Cs motto to Courage, Confrontation, Commitment? For care, courtesy and consideration are a hopeless anachronism in the multiculti hellhole that Great Britain and much of Western Europe is becoming.

From the Harrow School where Winston Churchill said in October 1941, “Never give in. Never give in. Never, never, never, never — in nothing, great or small, large or petty — never give in, except to convictions of honor and good sense. Never yield to force. Never yield to the apparently overwhelming might of the enemy.” To all of Harrow’s schools where in Anno Domini 2010 Halal was the only available meat option (and perhaps still is). And to Harrow’s St Gregory’s Catholic Science College that in 2011 reversed its ban on cornrow hairstyles. It did so after a Bodysnatcher High Court judge opined that its refusal to admit a cornrow-coiffed student of Afro-Caribbean ancestry constituted “unlawful, indirect racial discrimination which is not justified.”[1]

The school yielded, though protesting that cornrows are a badge of gang related gun and knife crimes in its area (undoubtedly by racist, cornrow-sportin’ Harrovians). And in doing so it gave in and shed its convictions of honor and good sense, and insulted the memory of Winston Churchill. One wonders, had he known, would he have bothered?

All of this could never have happened without the snaring, drugging, kidnapping, pimping and gang-raping of the British people by its ruling Socialist elites and their weak-in-the-knees Conservative make-believe opponents. When will the history of this crime be written? When is the trial?