The German security services in North Rhine-Westphalia have been infiltrated by a Salafist, who was assigned the task of observing his… ahem… extremist co-religionists. This fundamental breach of operational security has caused a stir in the German intelligence community.

Below are two articles from the German media about the case. The first, from Der Spiegel, was translated by JLH:

Security Services Uncover a Salafist in Their Own Ranks 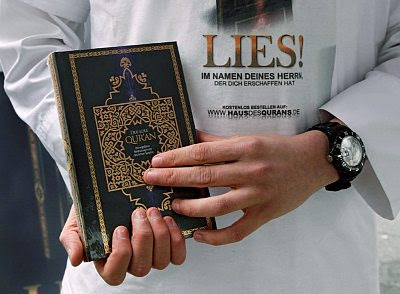 The ministry of the interior classes the case as very serious: According to a newspaper report, security services in North Rhine-Westphalia have uncovered an Islamist in their own ranks. The police officer is said to be an adherent of the Salafists — and had clear access to secret documents.

Essen: As a police officer, a suspected adherent of Salafism is said to have had access to secret papers of the state’s security services. The West German General Newspaper reports that the Duisberg police commissioner was suspended. In the interior ministry, the case was classed as “very serious,” because the 31-year-old man was used in the security services and deployed, for example, to observe radical Islamists.

He had worked for the security services for half a year and had been assigned to the Salafists, among other things, It was easy for the man to gain access to confidential documents. The newspaper reports that the interior ministry is now examining whether the man’s inside knowledge could have consequences for pubic safety, and whether practical countermeasures would be necessary. The policeman’s connection to the Salafists only came to light when he turned up at an information booth which was displaying Salafist hate writings.

According to the report, a disciplinary action was brought against the officer. He was accused of placing Islamic sharia above free, democratic, constitutional law.

North Rhine-Westphalian interior minister Ralf Jäger said: if the accusations should be confirmed, the policeman would be let go. “Extremists have lost nothing so far as police and security services are concerned,” the SPD politician explained. The police president of Essen, Stephania Fischer-Weinsziehr, said she was expecting the man’s discharge from his civil service appointment. According to the report, this would be the first work prohibition for a Salafist in Germany.

The radical religious group had attracted attention recently through street battles in Bonn with sympathizers of the right-extremist party Pro-NRW. Further, an internet video circulated in which a jihadist praises the violent protests of Salafists and calls for the murder of opponents of Islam and journalists.

Police and security services also showed concern at a project of the Salafists, in which the radical Islamists are distributing free copies of the Koran. Salafists — which about 5,000 Muslims in Germany declare themselves to be — claim to be the defenders of Islam who must protect their religion from infidels.

Picture caption: Salafist with copy of Koran (in April in Offenbach). The intelligence services are alarmed.

Sign in picture: Read! in the Name of Your Lord Who Created You. (At least one cabaret comedian has noticed that the German imperative form is also an English plural…)

The second article, from WAZ, was translated by Hermes:

Essen/Düsseldorf — A Salafist police agent may have kept his brothers in faith under surveillance. He could also have had access to confidential documents. The agent from Duisburg has meanwhile been suspended from service. The interior minister Ralf Jaeger is now examining the implications of this case.

A presumed enemy of the state with direct access to secret information from the O.P.C. (Office for the Protection of the Constitution): According to the investigations of the WAZ media group, the suspended agent, an inspector from Duisburg called Ali K., could have been dealing with extremely confidential documents for months, till it was noticed that he leaned towards Salafism. The interior minister Ralf Jaeger (SPD) ponders the implications of his level of internal knowledge for public security, and whether countermeasures are needed. Yesterday a spokesperson said that this was a “serious case”.

No wonder. This false prophet had been working for half a year for the interior ministry. In section 6, the mobile observation group of the O.P.C. He had periodic contact with secret procedures. The minister remained silent regarding which documents, which crisis scenarios and which strategies he knows about. Answers will be given in parliament only after investigation is complete. Later on it will be evident who profited the most from the observations of Ali K.: the investigators or the targeted subjects.

Arranged for the brothers in faith

According to sources for the WAZ Media Group, some of his operations could have been counter-productive. The inspector with Salafist tendencies may have been commissioned to deal with his brothers in faith. According to police insiders, surveillance of the Islamic scene was one of his tasks, but there are no official comments on this. Rumors are heard behind the scenes about keeping “snoopy attitude” a taboo in the future; the compulsory security checks for the applicants could be tightened.

As reported, Ali K. was busted while registering information booths in which, besides copies of the Quran, Salafist inflammatory pamphlets were also being distributed. The 31-year-old said that his beliefs were his own private matter. He personally knows hate preachers calling for violence. He was suspended from duty a month ago. A disciplinary procedure is in progress against him. The chief constable of Essen, Stephania Fischer-Weinsziehr, has taken into account the “dismissal from his activity as a civil servant”. This would mean the first case of a Salafist being banned from his job in Germany.

The dismissed agent has made no declarations yet. His lawyer is also silent. Insiders foresee a coming legal struggle regarding official issues.

The interior minister wants to take drastic measures. “If the accusations prove to be true, he will be fired”, Jaeger said to WAZ media group.

4 thoughts on “A Salafist Spy in North Rhine-Westphalia”