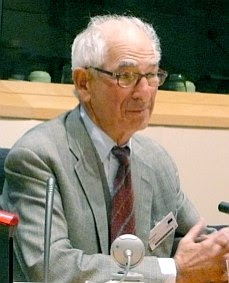 As mentioned in last night’s news feed, the redoubtable Counterjihad activist David Littman died yesterday in Switzerland after a long battle with leukemia.

Mr. Littman has been eloquently eulogized by Jerry Gordon at The New English Review, and by Andy Bostom at his own website. I’m sure many more remembrances will be published in the next few days.

Vlad Tepes has compiled two video retrospectives to illustrate the enormous efforts that David Littman made at the United Nations in the thankless task of resisting the Islamization of that body.

The second video shows the almost superhuman persistence exhibited by Mr. Littman in the face of continuous interruption during his various attempts to speak at UN meetings. You will see the servants of the OIC sandbag him over and over again in these clips, yet he never gives up:

We won’t see the likes of David Littman again anytime soon. But we who must continue without him will always remember him.

3 thoughts on “A David Littman Retrospective”