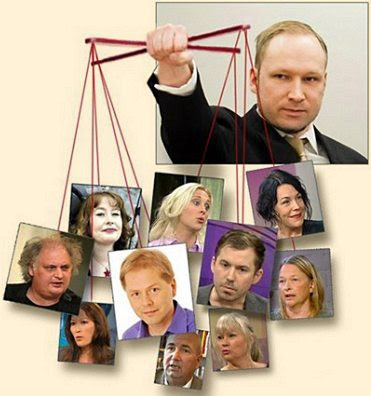 Over the past week or so the trial of Anders Behring Breivik has dominated the Norwegian media, overwhelming almost all other news stories. The rest of Scandinavia has also been caught up in Breivik Fever. This is especially true of Sweden, whose elite masters have taken the opportunity afforded by the Butcher of Utøya to hunt down and eliminate the few “right-wing extremists” who remain in the Land of Pure Socialism.

One of our Swedish correspondents sent a link to the image at the top of this post, which originated with Affes Statistik-blogg. Our correspondent takes note of the accompanying post, “Breivik’s useful idiots in Sweden”:

The image shows Breivik manipulating all the PC/pro-Islam/anti-SD media elite, all willingly dancing as intended.

“Many parties in the Swedish media have so far acted exactly as Breivik wanted and expected. From his perspective, they help to complete the plan. They are what is called ‘useful idiots’.”

Our correspondent suggests that Swedish readers should look through the rest of Affe’s blog, which contains excellent statistics, graphs, and more images.

With the help of another Scandinavian correspondent, additional information can be presented from other sources in Sweden.

Thoralf Alfsson, who reposted Affe’s image, had this to say:

One cannot help but think of the old saying “A picture is worth a thousand words.”

In one way or another, all of these people have used the terrible atrocities committed by ABB on July 22 to achieve their own ends. Did they feel ashamed of this? No, not the least; they are in the main part of the politically correct elite who are always enlisted as experts by Sveriges Radio and Sveriges Television and sit on the TV sofas each and every week. Congratulations, Sweden!

Long-time Gates of Vienna readers (and most Scandinavians) are familiar with Expo, the “anti-racist” organization in Sweden that puts the spotlight on anyone suspected of having even the slightest right-wing tendencies. Like Hope Not Hate — its counterpart in the UK — Expo strives to expose and do damage to anyone it deems “fascist” or “racist”, by any and all means necessary.

For those who read Swedish and want to investigate the Expoids more closely, the site Expo Exposed is recommended. An excerpt from its mission statement:

Expo has all the ingredients, through media and media relations, education and propaganda operations, intelligence and research services, and an executive terror organization in the AFA [“anti-fascist”] movement. However, your politically correct acquaintances and friends who dare not question or think critically are also part of the left-fascist Expo business without knowing it.

The purpose of this blog is to provide information on the Expo Foundation, a left-wing extremist organization with roots in the Socialist Party and the militant left-fascist organization AFA, and to highlight Expo’s entire propaganda operation and its links to the militant left-wing extremists, and to explain how a few key people — Expo’s Mikael Ekman, AFA leader and convicted criminal Martin Fredriksson, Mathias Libra and Robert Aschberg — are “spiders in the web” for a large and sophisticated intelligence organization.

Jan Guillou wrote in Aftonbladet on 1-1-1996 that Expo acts as a “classic intelligence agency”, and if anyone knows how intelligence works, he does.

Facts for this blog are taken and compiled from many websites for the sole purpose of collecting undeniable facts about Expo in a single location.

In other words, Expo Exposed is doing to Expo what Expo has been doing for decades to anyone who lies to the right of Lenin on the political spectrum.

More power to them!