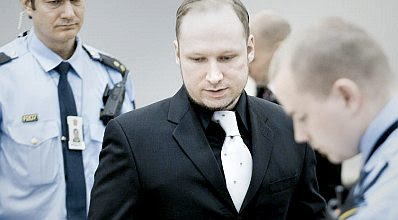 The first week of the trial of Anders Behring Breivik is over — one down, nine to go! — and our Norwegian correspondent The Observer has some thoughts about the larger implications of what is happening in that courtroom in Oslo.

Like me, he sees the careful planning by the authorities going awry as the world listens in on the horrifically lucid thoughts of the Butcher of Utøya.

The Norwegian Straitjacket
By The Observer

Absolutely nothing has gone according to “plan” for the Norwegian authorities in this particular case. During the attack they failed miserably, and now they feel compelled to conduct a proper court case, because anything else would go against every grain of their ‘benign’ ideology.

As Mr. Gjems-Onstad said, the authorities in Norway have been so busy telling everyone else how to manage their internal affairs, and stressing how humane Norwegians are, that anything short of this type of response would be considered pure hypocrisy and a complete and utter loss of face. Their besserwisser attitude has become somewhat of a straitjacket, and it seems they don’t find it very comfortable.

One thing people should realize about the Norwegian authorities is that they are very concerned, almost to the point of obsessiveness, about what foreign political ‘dignitaries’ and governments think of them. They really have a desperate desire to be liked.

It’s an inferiority complex that stems from the fact that Norway was under foreign rule for such a long time. Norway only became an independent nation in 1905, an independence which we of course lost when we were hijacked by the EU-fanatics in our government.

Breivik has managed to scare the authorities to the bone. When you read about all the terrible ideas that have been hatched in his evil little brain, everything from blowing up gasoline tanker trucks in crowded squares to beheading the former prime-minister and killing the entire Norwegian Government, it really send chills down your spine.

I have mentioned previously that we’ll probably see copycats trying to emulate Breivik’s terrorist acts. The Norwegian Government is aware of this possibility, and it scares the hell out of them.

It’s worth remembering that the population of Norway is only five million. The population of Germany, France and England is ten to fifteen times greater than that, and that should in theory mean ten to fifteen potential Breivik copycats in each of these countries. Add the very dismal future prospects in some of these countries to the equation, accompanied by a tsunami of third-world immigrants hitting their shores, and you have a very volatile and tense situation at hand.

Also bear in mind the new regimes that are emerging in North Africa….

We have lived to see interesting times.

18 thoughts on “The Norwegian Straitjacket”