What is the Muslim Brotherhood?

Al-Ikhwan al-Muslimeen, known in English as the “Muslim Brotherhood”, was founded by the Egyptian radical Hassan al-Banna in 1928. After he was assassinated in 1949 his mantle was assumed by Sayyid Qutb, who became the most popular exponent of Sunni fundamentalism in history.

The Brotherhood is a quintessential Islamic reform movement. Above all else it aims to return to the original practice of the Islamic faith as laid out in the Koran and the Sunna.

Its motto — which is echoed by Hamas, the Muslim Brotherhood franchise in “Palestine” — is translated thus:

Allah is our objective. The Prophet is our leader. The Qur’an is our law. Jihad is our way. Dying in the way of Allah is our highest hope.

Most American readers will be familiar with the Islamic charity known as the Holy Land Foundation, whose directors were convicted on one hundred and eight charges of terrorism financing in November 2008. 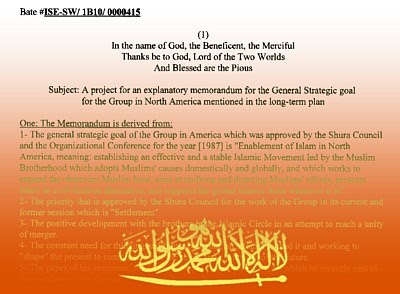 The above document was composed in 1991. It was entered into evidence during the Holy Land Foundation trial, and was stipulated to by the defense. From a legal standpoint, that means that what this document says is true.

It serves as the explanatory memorandum on the general strategic goal for a group in North America known as “the Islamic Movement led by Muslim Brotherhood.” Pay particular attention to these paragraphs:

The Movement must plan and struggle to obtain “the keys” and the tools of this process in carry [sic] out this grand mission as a “Civilization Jihadist” responsibility which lies on the shoulders of Muslims and — on top of them — the Muslim Brotherhood in this country.

The process of settlement is a “Civilization-Jihadist Process” with all the means. The Ikhwan [Muslim Brotherhood] must understand that their work in America is a kind of grand Jihad in eliminating and destroying the Western civilization from within and “sabotaging” its miserable house by their hands and the hands of the believers so that it is eliminated and Allah’s religion is made victorious over all other religions. … It is a Muslim’s destiny to perform Jihad and work wherever he is …

Our leaders want American citizens to be unaware of the “Civilization Jihad”. They would prefer that we regard Islam as just another religion, like Presbyterianism or Buddhism. They don’t want us to know that Islam is a totalitarian political ideology with a primitive religious component. Our awareness would upset their petrodollar-funded applecart.

To educate Americans about what is being done to their country, the Center for Security Policy in Washington D.C. — most emphatically not funded by petrodollars — has now released a ten-part online course about the Muslim Brotherhood in America.

It’s depressing stuff. We don’t want the scales to be lifted from our eyes, because then we would have to pay attention to something that we’d prefer not to see. The truth is hard to look at.

But here it is, introduced by Frank Gaffney, the president of CSP:

From the introduction to The Muslim Brotherhood in America:


Have you ever asked yourself why, despite more than ten years of efforts –involving, among other things, the loss of thousands of lives in wars in Iraq and Afghanistan, well-over a trillion dollars spent, countless man-years wasted waiting in airport security lines and endless efforts to ensure that no offense is given to seemingly permanently aggrieved Muslim activists – are we no closer to victory in the so-called “war on terror” than we were on 9/11?

Thankfully, we have been able to kill some dangerous bad guys. The sad truth of the matter is that, by almost any other measure, the prospect of victory is becoming more remote by the day. And no one seems able to explain the reason.

In an effort to provide the missing answer, on April 24, the Center for Security Policy is making available via the Internet a new, free ten-part video course called “The Muslim Brotherhood in America: The Enemy Within.” This course connects the proverbial dots, drawing on a wealth of publicly available data and first-hand accounts to present a picture that has, for over a decade, been obscured, denied and suppressed:

America faces in addition to the threat of violent jihad another, even more toxic danger – a stealthy and pre-violent form of warfare aimed at destroying our constitutional form of democratic government and free society. The Muslim Brotherhood is the prime-mover behind this seditious campaign, which it calls “civilization jihad.”

This Course draws exclusively upon information in the public domain and that obtained from first-hand accounts. There is, assuredly, considerably more information that would be helpful to making to a full threat assessment. The findings below, based solely on what is currently available, should prompt those with access to classified information, subpoena power and other investigative tools to bring them to bear urgently for that purpose.

In light of these findings, there is an urgent need for rigorous congressional oversight and investigations aimed at exposing the extent of the civilization jihad – and the need for corrective action aimed at countering it, particularly by federal authorities. Such legislative branch initiatives should be accompanied by corresponding actions initiated by Inspectors General and, as appropriate, law enforcement.

There is much, much more to be learned about The Muslim Brotherhood in America.

Many thanks to Vlad Tepes for uploading the video used in this post.

5 thoughts on “Sabotaging Our Miserable House”