The following article and interview with the German scholar and author Udo Ulfkotte was translated by JLH. The translator’s introduction concerns the need for — and lack of — charisma among the leaders of the European Counterjihad:

Udo Ulfkotte is already familiar to Gates of Vienna readers. But this time he said something that really brought me up short. And not the business about the financial disaster on the horizon — what caught my attention was his comment about all the Counterjihad forces in Europe and why nothing was being accomplished, except in the Netherlands, where a charismatic leader has appeared.

When you think about it… First Pim Fortuyn was assassinated by a lame-brained Greenie — charter member of the Left half of the dual threat to Western civilization — for having the nerve to say what he thought about the immigrant invasion of his country. The assassin will be getting out in 2022, still in his fifties. Scratch one high-profile, homosexual, Islam-critical politician.

Then Theo Van Gogh — whose crimes were the documentary, Submission, made with Ayaan Hirsi Ali, followed by the fictional account of Fortuyn’s assassination — was killed by an angry Moroccan Muslim, the second half of the dual threat. Hirsi Ali, sadly, felt compelled to leave the country. Scratch one more high-profile politician and one documentary film maker.

And lo and behold! Another crazy Dutchman arises who makes a documentary, organizes an anti-Islam party and manages to find protection before some leftist or Islamist nut takes him out. So the Left tries to put him in prison or at least discredit him. But it backfires and he is invited to other countries where people are desperate for leadership in this battle. He has that damned charisma! We can only hope that his protection holds. He is getting the job done and giving no quarter politically.

But what about what Ulfkotte said? Sad but true. Most of Europe is still looking for that charmed leader. Wilders’ disciple, René Stadtkewitz, whom I first noticed when he was threatening to resign from the CDU because they would not let him have a forum to discuss Islam: a man elected from his district in Berlin because of his strong stand against a mosque there; a man whose house was fire-bombed while he was fortunately elsewhere with this family; a man who, when he could not stand it anymore, was separated from the CDU and formed Die Freiheit. I cannot say how much I admire his courage, his determination and his principles. But, alas, he does not have that magical quality, and I think he knows that, so he is doing the best he can with what he’s got. Which, let’s face it, is more than most of us.

In Scandinavia, there are two artists/journalists in Sweden and Denmark who live under death threat and in Norway there is a clear-eyed historian whose own government is doing what it can to destroy him. Where is the charismatic politician who will take up this gauntlet?

In Italy, a deeply flawed man was still able to attract support and had the cojones (note please that this term was made popular in political language by a Democratic Secretary of State, not some sex-mad reactionary) to take some action against immigration abuse and the Stalinist regulation by the EU, but it removed him from office. (Who needs elections?) In France, there is a congregation of midgets. In Belgium, home of unelected tyranny, the anti-jihad leader can only appeal to one-half of an ethnically schizophrenic population. In Spain, a Leftist government wobbles along and there is no opposition leader in sight. In the UK, we might think of Conservative Daniel Hannan or UKIP’s Nigel Farage, but they seem to garner more interest on the other side of the Atlantic than at home.

Is Ulfkotte right? I hate to think so, but it is true that the political, academic and journalistic establishment are of one mind, and no election except the showing of Wilders’ party has altered the power structure.

Where do I go to get a charisma shot?

The translated article and interview from Citizen Times:

“Most Muslims Suffer From Islamophobia”
by Felix Strüning
March 28, 2012

Islam critic Udo Ulfkotte in a Citizen Times interview on Islam, the economic crisis and why the latter is the solution. 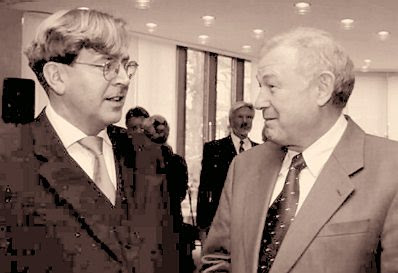 He is to a certain extent the inventor of the Islam-critical fact book and probably the most provocative opponent of political Islam in Germany. Udo Ulfkotte explains in a Citizen Times interview why:

Photo: Udo Ulfkotte with the Bavarian interior minister and panegyrist at that time, Günter Beckstein (right), concerning the award of the civic prize of the Annette Bartheit Foundation, 2003

2 thoughts on “Looking for Mr. Charisma”