As everyone knows by now, Circus Breivik opened today in Oslo.

The farcical antics began long before today, however — we’ve been through a prodromal phase of several weeks during which the leftist mainstream media outlets (yes, I know that’s redundant) prepared and published their hit pieces on every writer, publication, and website they consider “xenophobic”, “racist”, or “extreme right-wing”. 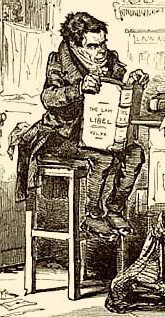 Various sites in Norway and the rest of Europe have been rehashing all their material from last July and August. Photos of Fjordman and Robert Spencer have been dusted off and re-digitized. Anyone foolish enough to reply to press enquiries has been quoted out of context and had his words used against him.

In other words, ho-hum. Business as usual.

Gates of Vienna has come in for its share of slime, especially in the Norwegian press. We’re used to all that, and generally ignore it. However, one particular hit piece was so egregious that it required a response.

I refer to an article entitled “Far-right anti-Muslim network on rise globally as Breivik trial opens” that was written by Mark Townsend and published in The Guardian last Saturday, April 14, 2012. The penultimate paragraph of Mr. Townsend’s screed included this sentence:

Other US and UK links include the Virginia-based anti-Islamic blog, the Gates Of Vienna, which counted Breivik as a contributor.

This is, as all our regular readers know, a damnable lie.

To leave that sentence on the record, uncontested and uncorrected, was not something that I was willing to do. That same day I wrote the following email to The Guardian:

To whom it may concern at the Guardian/Observer:

In his article Mr. Townsend stated:

“Other US and UK links include the Virginia-based anti-Islamic blog, the Gates Of Vienna, which counted Breivik as a contributor.”

This is a blatant falsehood.

Anders Behring Breivik was NOT a contributor to our blog. He NEVER contributed any essays whatsoever. He wrote NO articles, under his real name or any pseudonym.

I demand a prompt public retraction and correction, to be published at the Guardian and any other location where this libel appeared, both online and in print.

Because my email was written on a Saturday, it seemed fair to allow the editors until close of business the following Monday (today, London time) to correct their false and libelous assertion. As of this writing I have not received a response, nor has the falsehood in The Guardian been corrected. Hence I have taken the unusual course of publicizing the matter.

I will mull further options, but obviously the mulling process will not be conducted in public.

Readers who wish to make The Guardian aware of their opinions on this matter are invited to do so.

As always: Please be civil, courteous, and temperate in your communications. Anger and name-calling merely give the recipient the opportunity to dismiss your email without reading it or considering your ideas.

The email address I used was reader@observer.co.uk, but there may another one that is more appropriate.

12 thoughts on “Lies, Damned Lies, and The Guardian”