Drawing on the work of Dr. Andrew Bostom, Anestos Canelides outlines the scriptural doctrines and religious traditions behind the Islamic practice of jihad. 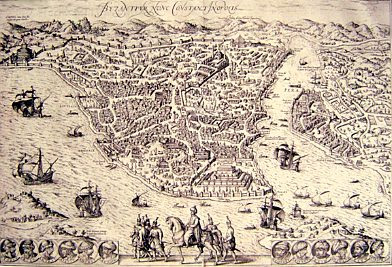 Jihad: The Law of War
A Summary

The following essay was originally planned to discuss war under the law of Islam. With four schools of Sunni Islamic law, and then another four Shiite schools of law, it is a very complex topic. An entire book could be written about it. I don’t pretend to be a scholar on this subject, but it is still important to discuss, in summary, the motivation for Islamic war against the infidel.

In the mindset of the fundamentalist jihadi, holy war against the non-believer is a religious duty because of the universalism of his mission, which is to convert non-believers to Islam by force or persuasion. For the Islamist, persuasion is always the first choice, but if not then force becomes necessary.[1]

Jihad is in fact regarded as a form of religious propaganda that is carried on by either persuasion or the sword, but jihad does not always mean war, since exertion in the path of Allah might come through peaceful means, as in the case of Indonesia. Muhammad warned his people against the sins of idolatry and invited them to worship Allah. “He who exerts himself (jihada) exerts only for his own soul, which expresses the Jihad in the terms of salvation of the soul rather than for Proselytization.”[2]

“9.25 — But when the forbidden months are past, then fight and slay the pagans wherever ye find them, And seize them, beleaguer them, and lie in wait for them in every stratagem (of war); but if they repent (accept Islam) and establish regular charity then open the way for them; for God is forgiving, most merciful.”[3]

Within the Muslim community or Ummah, legal war or jihad is an obligation or social duty (Fard Kifaya) There can be exemptions; when one group of Muslims carry out their duty out then it offers others exemption. [4] Exemptions also include: sickness, extreme youth, insanity, blindness, lameness, sex (females), the inability to obtain what is needed to participate and being in a state of servitude. [5]

But the Jihad becomes an obligatory or personal duty, for all Muslims, when they are enlisted or their country is invaded by an enemy. In this case it is obligatory for free men who have reached puberty and are endowed with reason and are able to fight. Holy war is not only considered an obligation but also a good and pious work.

Islamic Jurists have distinguished four ways in which a Muslim may fulfill his obligation: by his heart, his tongue, his hand, and by his sword that he may fulfill this duty. “The first is concerned with combating the devil in attempt to escape his persuasion to evil.” The first option was considered the greater jihad by their prophet. The second and third ways are fulfilled by supporting the right and correcting the wrong. The fourth is concerned with fighting the enemies of Allah, and believers are obligated to sacrifice their lives and wealth when fighting in the cause of their faith, in the prosecution of war. The fourth is called the lesser Jihad.

The duty of the Ummah truly is Jihad, holy war, and not just any war, but a war to force the unbeliever to embrace universal Islamic doctrines, unless he is a Christian or a Jew. In this case, if the non-believers pay the so-called protection tax, they become a protected minority. This status applies even when they are not really a minority in numbers. This so-called protection tax did not always guarantee Christians or Jews that they would not face oppression, or in some cases forced conversion.

There is a deeply held conviction that the soul of every Muslim, without exemption, was created to fight on the path of God. Through this call of supreme authority they must, with joy, spread Islam and allow the word of God to have the final say. According to the Muslim jurist, holy war is a requirement. It is the law of God and is the part of worship offered to Allah, since the doctors of the law classify it in the category of ibadat or acts of adoration. Muhammad received the order to proclaim the faith of Allah or what has been commanded, and to debate with the Infidel. If the unfaithful were to reject the message and refuse to follow the path of Allah then the believers were ordered to attack them. [6]

Later the Muslim casuist (one who resolves moral issues) adopted an explanation that is found in a specialized treaty. War in itself is evil because it involves the destruction of the human body which was created by Allah. It also devastates entire regions, and to deny man any means of sustaining life is wrong and evil.

“The human body is the work of God, who fashioned it himself with clay taken from the earth: the country inhabited by man, and which he needs for food was granted to him by divine Providence. To deprive man of life and the means of sustaining it is to go against the will of God, to incur his reprobation and the malediction of his Prophet.”

If war is evil in Islam, then how did it become a good thing? Why did d it become incumbent on men? Since its purpose is the exaltation of the true faith though Muhammad, the Prophet of God, it is understood that holy war is a necessary evil as long as there are people on Earth who will not willingly embrace the faith of Muhammad.

“And so the casuist ended up with classifying holy war among the accidental acts of piety, and they rank it after faith, prayer, fasting, and pilgrimage, which are essentially acts of piety.” Because of such fanaticism it is little wonder that a few burnt Qur’ans were of more value than the deaths of 17 Afghan Muslims by an American soldier. Just imagine how little they value the life of any infidel who rejects the message of Muhammad! Even though man is a divine creation of God, by their own creed, unbelief by the infidel turns one into an enemy of Allah. It is their pious duty to convert or kill you.

It is a good thing that not all Muslims adhere to this belief, but there are some today who do. These are the ones we must be concerned with. These are the ones who believe holy war is a calling by Allah against all unbelief, in which they include truly moderate Muslims.

Clement Huart (1854-1926), a scholar on Arabic, Persian and Turkish languages, says, “In reality Muslims place [holy war] on the same footing as the other primordial duties of his religion. He is trained to do so by the custom of bloody sacrifices, consummated by his own hands at certain times of the year.” Islam is a faith with strict ritual and moral codes. With the promise of martyrdom and eternal life with 72 virgins, without facing God’s wrath, the extreme fundamentalist follows Allah’s path and declares holy war against all infidels.

Majid Khadduri, a professor of Middle Eastern Studies, states, “Thus the jihad (holy War) may be regarded as Islam’s instrument for carrying out its ultimate objective by turning all people into believers, if not in the Prophethood of Muhammad (as in the case of the dhimmis) at least in the belief in God.” It will not be until all are either subjected as dhimmi or become believers, in the path of God, and embrace Muhammad as Allah’s Prophet, that there will be universal peace. Until then there will be a permanent obligation upon the whole Muslim Ummah to fight the unbeliever.

A special thanks to Dr. Andrew Bostom for creating such a powerful research tool entitled The Legacy of Jihad.

3 thoughts on “Jihad: The Law of War”