Henrik Ræder Clausen has written an account at Europe News of last weekend’s Counterjihad demonstration in Aarhus — and, more significantly, the violent “anti-fascist” reaction to it. 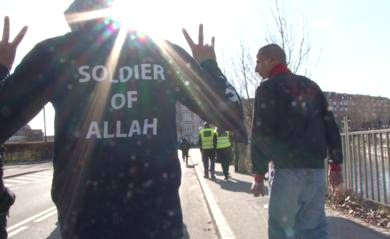 ‘Anti-fascists’ in proxy war for Islam
by Henrik Ræder Clausen

On Saturday, March 31st 2012, street fighting took place in the otherwise docile city of Aarhus, the second largest city in Denmark. A demonstration organized by DDL/EDL for human rights and against Islamization was assaulted by the combined forces of self-styled ‘anti-fascists’ and Muslims seeking to teach the demonstrators ‘tolerance’. The Danish police was out in force and largely managed to protect the demonstration from the attackers.

Details and pictures below [see the original article for the rest of the photos].

What is the English Defence League?

The English Defence League is a grass-roots movement against the Islamization of Great Britain, created in Luton 2009 after a homecoming rally for British soldiers was disgraced by Islamists scorning the soldiers. The organisation quickly gained a large public following and staged many public rallies, at times gathered thousands of supporters, mainly in the English lower and middle class.

The EDL rallies, however, have been meet with fierce resistance from organisations like Hope, not Hate, Unite Against Fascism as well as various Muslims in Britain, who have strongly opposed the right of the EDL to hold street rallies. This has led to a long series of violent clashes between the groups, turning the EDL rallies into major operational challenges for the British police, who questions that freedom of expression and freedom of assembly are worth expenses in the range of millions of pounds.

Also the British government is strongly opposed to the English Defence League. This was most clearly expressed by prime minister David Cameron, who on August 11th 2011 in the British Parliament condemned everything the EDL stands for, and further stated that of all the sick people in Britain, none were sicker than the English Defence League (their response is here) and their attempts to restore order after the recent riots.

The tricky meeting in Aarhus

While the English Defence League has been very successful in their homeland, attempts to export the concept to other European countries have failed so far. A rally in Amsterdam, the Netherlands on October 30th 2010 was hampered by relocations, delays, violent opposition and other problems, and managed to attract only a fraction of the numbers seen at the rallies in England.

The DDL/EDL CounterJihad meeting in Aarhus on March 2012 was announced publicly well in advance, but organisational problems marred the preparations, some prospective speakers cancelled their appearance, and fierce discussion broke out when hard left sources claimed that National Socialists had been invited to attend the event, a red light to many potential attendees.

When news of the plans were confirmed in Aarhus, the political condemnation was swift and powerful. While Danish politicians and media tend to take pride in protecting freedom of expression against Islamist pressure, in this case there was no doubt: All self-respecting local politicians and media agreed to condemn the DDL/EDL rally and what it stood for. Even the local branch of the usually Islam-critical Danish People’s Party joined in the rejection of the EDL and their objectives.

A tale of three (or four) demonstrations

The city council of Aarhus even undertook the effort to organize a counterdemonstration “ Aarhus for Tolerance “, which took place on March 21st 2012, where the unconditional rejection of what DDL/EDL stands for could be expressed clearly by all, including mayor Jacob Bundsgaard.

A further counterdemonstration “Aarhus for Pluralism” was organized on March 31st by several political parties, labour unions, leftist and immigrant organisations, in order to show their unconditional rejection of everything the various European defence leagues stand for. Antifa was the main organizer of public relations and logistics aiming to bring thousands of protesters to Aarhus, gathering under Communist/anarchist banners.

While the mainstream of the left wing protests against DDL/EDL made clear that they did not intend to commit violence, some dissented. They publicly declared that they did not accept the non-violent approach desired by the local left, and were preparing to assault the rally directly. Erik ‘Cablefish’ Storrud, who has a long record of public order offenses, made that clear on Anarkistisk Debatforum, March 22nd 2012 (by way of Uriasposten):

There is NO chance that “Aarhus for Pluralism” will be the only street activity against EDL on that day. You ‘local’ people have by now condemned the more militant anti-fascists to such an extent that there really is no reason to respect your opinions and desires any longer.

The sun rose on a sunny Aarhus on the day of the demonstrations.

At 13:00, the counterdemonstration assembled in front of the town hall, under communist, labour union and anarchist banners. It was a rare display of strength for classical communists, whose banner were dominant in the street, and not least for Antifa, who otherwise has a record of violent assaults against those they disagree with, for instance in Stuttgart June 3rd 2011. After initial music and speeches, the estimated 4,000 participants went on a 3.7 kilometer march through the city, where an open air festival was held beside the Aarhus cathedral.

At 14:00, the demonstration started in Mølleparken, a centrally located park in front of the Aarhus main library. Danish police was out in force to protect the demonstration against potential problems from the violent hard left or immigrants. An estimated 150-200 persons participated in the rally, which sported flags from various nations (including Israel) and a prominent “Stop Sharia” banner. 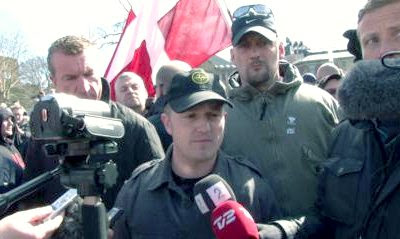 
Speeches were held in a relaxed atmosphere, and police was easily in control of the singular disturbing elements trying to assault the demonstration. At the police lines leftist and immigrant youth were shouting “Fascists!”, “Nazis!”, “F***ing Jews!” and “Kill all the Jews”, but the solid police presence held the intimidation down to a reasonable level. The contradictory statements had an explanations: Radical immigrants of Palestinian origin are strongly anti-Semitic, and seized the opportunity to show their honest opinion of Jews and Israel.

All proceeded in relative peace until around 15:30, when an estimated 150 ‘anti-fascists’ assaulted the demonstration without warning. They managed to overrun the police line and Antifa posted on Twitter that most of the attackers had managed to escape arrest. Police quickly regained control of the situation, letting the DDL/EDL event continue after a brief interruption.

In the streets around Mølleparken, however, things were not at ease. Antifa ‘activists’ used tools brought for the occasion to break rocks out of the pavement, using them, bottles and other projectiles as ammunition against police and their vehicles, as well as home made fireworks powerful enough to, according to one ‘activist’, blow a shoulder right off a man. A barricade was erected in Grønnegade east of Mølleparken, but was quickly demolished by the police. Many arrests were made.

The demonstration in Mølleparken continued as planned until 17 in the afternoon, after which a bus was escorted in to bring the most prominent DDL/EDL members into safety. Police sought to escort the bus away from the assaulting forces, but it was halted in a nearby street, pelted with stones, and drove from the place with broken windows. Antifa later boasted that an additional three buses, held in reserve by the police, had also been vandalized by the so-called ‘anti-fascists’, and drove from the place with their windows broken.

While the higher profile participants and organizers had been safely escorted from the area, some 20-30 participants were left behind half an hour after the demonstration, surrounded by some 200-300 agitated left-wing extremists and immigrants calling for blood and throwing bottles at the last participants. One of them threw a bottle back to the mob at waist height — and was promptly arrested by the police for attempting to commit severely dangerous violence, as well as for inciting public disorder.

The aftermath: A Pyrrhic Antifa victory

While Antifa boasted of their forceful display of might and power towards those they consider ‘intolerant’, the victory was hollow. Blogs, television stations and newspapers have documented the raw anger and intolerance of the Antifa and the immigrant youth towards those of other opinions, eclipsing the peaceful counter demonstration entirely.

A full 89 arrests for public disorder offences completed the picture. On the following Sunday, preliminary hearings were held for the most serious cases. For instance, an Ahmed Muhammad of Somali origin explained how he participated in a group of 80 Antifa and immigrants seeking to beat up the “intolerant racists”, yet ending up clashing with the police instead. The most radical ‘activists’ can expect to spend 6-12 months behind bars for the rioting, while most will be fined Dkr. 4000 (US $ 700) for politically motivated disturbances of public order.

Not only did the day turn violent as the most dire predictions had expected. It was also clear from the systematic use of Antifa Twitter and other media, as well as the organisational skill displayed in the assaults, that Antifa as such had planned this deliberately. While they claim to be tolerant and pluralistic, the tolerance applies only to those not opposing their views, and the pluralism does not include views critical to Islam or protesting Islamist undermining of democracy and freedom.

Thus, Antifa has demonstrated that they willingly play the game of the Islamists, join up with the Soldiers of Allah, and willingly use extensive violence against the police, critics of Islam and the current societal order as such.

The two photos shown here are courtesy of Christian Action Network, and used with their kind permission.

5 thoughts on “‘Anti-Fascists’ in Proxy War for Islam”