Yesterday we received an email plea from one of the Baron’s co-workers in the UK. He asked that we sign on to the petition for Asia Bibi, that Christian woman in Pakistan who is in jail awaiting execution.

Like many others, our friend doesn’t need to share her beliefs to support her right to peaceably hold them. Thus he is sending this to everyone he knows, trying to build support for her case. Good on him.

I’ve done as he asked and I’m requesting that you consider signing up as well. I realize it is Pakistan we’re dealing with, but the requirements for helping a fellow human-being are minimal — sign a petition — and numbers do make a difference, as we’ve seen in the past.

When they’ve reached a million signatures, the petition will be brought to the Pakistan Embassy in Washington, D.C.

Just click on the site, read the letter, and sign up. Your good deed done for the day.

And here is the background story on this woman [the emphases are mine —D]: 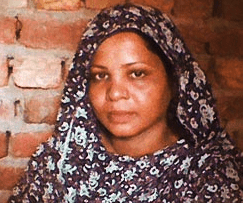 Asia Bibi, a Christian wife and mother in Pakistan, was arrested by police on June 19, 2009 and charged with blasphemy after she engaged in a religious discussion with co-workers. Many of the local women, including Asia, worked on the farm of Muslim landowner Muhammad Idrees. Her family was one of only three Christian families in a village of more than 1,500 families. During their work, many of the Muslim women had pressured Asia to renounce Christianity and accept Islam.

On June 19, 2009 there was an intense discussion among the women about their faith. The Muslim women told Asia about Islam, and, according to VOM sources, Asia responded by telling the Muslim women that Jesus is alive. “Our Christ sacrificed His life on the cross for our sins…Our Christ is alive.” She told them. Upon hearing this response, the Muslim women became angry and began to beat Asia. Then some men took her and locked her in a room. They announced from mosque loudspeakers that she would be punished by having her face blackened and being paraded through the village on a donkey.

Local Christians informed the police, who took Asia into protective custody before the Muslims could carry out their plan. Christians urged the police not to file blasphemy charges, but the police claimed they had to go forward because of pressure from local Muslim leaders.

After a lengthy trial, on Nov. 8, 2010, Asia Bibi was sentenced to death by a judge. The judge also fined Asia $1,190 (U.S.) and told her she had seven days to appeal the decision. Her attorneys filed the appeal promptly, and now wait for the Lahore High Court to rule. If the appeal is rejected, Asia would be the first woman to be lawfully executed under Pakistan’s blasphemy laws. She remains in prison, waiting to hear the high court’s ruling.

On Jan. 4, 2011 the governor of Punjab province, where Asia lives, was assassinated by a member of his security team. Though a Muslim, Salmaan Taseer had spoken out repeatedly in favor of a pardon for Asia Bibi and for a reexamination of Pakistan’s blasphemy laws. Governor Taseer also met with Asia in prison. On March 2, 2011, Shahbaz Bhatti, the only Christian member of Pakistan’s cabinet and another person who had spoken out on behalf of Asia Bibi, was also assassinated for his support of her.

The Voice of the Martyrs has supported Asia Bibi and her family since the time of her arrest. In July, 2011, VOM launched www.CallForMercy.com in an effort to gather 1,000,000 signatures from around the world asking for Asia’s release.

…Since there aren’t that many Christians left in Pakistan, one wonders if regular Pakistanis who signed on are at all concerned about the possibility of being persecuted in turn for their support of her plea?

In addition to the U.S., there are high numbers (considering their relative size) from Poland, and Germany. Russia is in 5th place. You can look at the home page to see the numbers of these and other countries. They also have a link to more detail and a picture of Bibi and her family.

[The picture above was cropped and stored on his site by Vlad Tepes, in order to allow me to have it here. Vlad’s been very kind in the Baron’s absence. The B used to store all our images at our ISP, but now he uses Blogger for everyday things. I never learned his method after he changed routines — it was so much easier just to call out, “Hey Baron…?” Guess I’ll have to mend my ways. Of course I say that every time he’s gone…when in reality, Mañana’s good enough for me.]

7 thoughts on “A Call For Mercy”