The Free Press Comes to Sweden

By the editors of Sappho.dk

(COPENHAGEN, 2 February) “Come and listen to what you will never see, hear or read in the Swedish media.”

This is a quote from the invitation to the Swedish Free Press Society’s first meeting, which took place on 31 January in the City of Malmö across the bridge from the Danish capital Copenhagen.

That same evening yet another murder and yet another bombing of a police station were added to the seemingly endless cycle of gangland violence in the Southern Swedish city. The number of unsolved murders in Malmö since last summer now stands at eight and the city has acquired a reputation as the Murder Capital of Northern Europe. 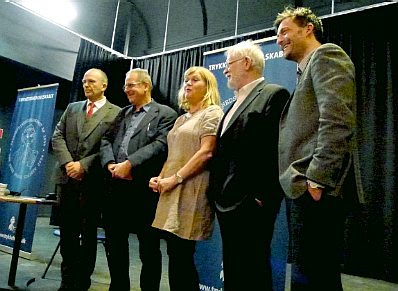 [The evening’s speakers in high spirits. From left to right: Hans Rustad (Norway), the Swedes Gunnar Sandelin and Ingrid Carlqvist, and the Danes Lars Hedegaard and Mikael Jalving.

But despite escalating violence and biting cold, 120 people turned up for the meeting, which was held under the watchful eye of about 20 uniformed and armed police in addition to a number of fierce-looking plainclothes agents that were there to protect the Swedish artist Lars Vilks, who has been the target of several assassination attempts.

The Swedish journalist Ingrid Carlqvist — the principal organiser of the event — had ample reason to be satisfied as she bid welcome to the audience and speakers:

“This is a historic meeting,” she said.

“We are here to break some taboos and let’s begin with the biggest one of all — Sweden’s immigration policies.”

As one of the evening’s speakers, the Swedish journalist Gunnar Sandelin, could testify, it is a risky business to write the truth about this national taboo.

In 2008 he wrote a critical piece for the Swedish daily Dagens Nyheter under the headline “Journalists impose blackout on immigration”. Since then he has been unable to find a steady job.

The article documented that the vast majority of so-called refugees have no legitimate reason to ask for asylum.

What is really taking place is a hugely expensive, camouflaged immigration. “In addition,” said Sandelin in his Malmö speech, “we have no knowledge at all about who is entering the country. The great majority come without any identification papers and present the immigration authorities with cooked-up stories.

“Many anonymous members of the immigration service are well aware of what is going on. Yet nothing is done.

“This ought to be an obvious issue for Swedish journalists but nobody wants to touch it. They simply impose a blackout when it comes to the entire problem of unregulated mass immigration. Instead they spend their time stigmatizing people who dare speak up. This is not a healthy social climate.”

Sandelin quoted a poll indicating that 90% of the population agree that the Swedish media are not telling the truth about immigration and its consequences.

As a former journalist with the state-owned TV channel SVT Sandelin was able to reveal how the channel views its role when it comes to immigration.

At some point he asked his boss why the reporters kept labelling immigrants as refugees when it was evident that they were not.

“My boss informed me that immigrants are weak and that it is therefore the obligation of TV-journalists to be on their side. Immigrants had to be presented as so pitiful that viewers would weep.”

According to Gunnar Sandelin, this is a highly ideological issue.

“It used to be the workers who were weak by definition — today it is the immigrants. We are being ruled by a sort mental Stalinism that determines what roles various social groups must play. As a consequence, people are being misled and kept in the dark as to what is really going on.”

Inequality before the law

The other speakers were two Danes and one Norwegian.

President of the Danish Free Press Society Lars Hedegaard attributed most current threats against free speech to the fact the entire vision of an idyllic multicultural society has unravelled.

“As we can see in city after city and country after country, multiculturalism and cultural relativity have created problems so vast that politicians no longer know how to solve them. Angela Merkel has admitted that the multicultural utopia is off the table and so have David Cameron and Nicolas Sarkozy. But if they cannot solve the problems, they can at least try to prevent people from speaking about them.”

The result, said Lars Hedegaard, is the introduction of so-called “hate speech” and “racism” clauses in the penal codes and an ensuing string of convictions all over Europe. The problem is compounded by the fact that laws against insult are being applied selectively leading to inequality before the law.

“Some people are being punished for saying what the specially favoured — those defined as ‘weak’ or righteous — can utter with impunity. In fact, the most favoured can say pretty much whatever they want.”

Hedegaard made a point of stressing that successful integration of immigrants cannot take place in a climate where people are afraid to speak their mind. “Who would integrate into a society that responds to any attack by limiting the rights of its own citizens?” he asked.

“Without free speech we cannot solve the problems of society. We cannot even identify them.”

Cracks in “The Realm of Silence”

The other Danish speaker, journalist and author Mikael Jalving, is quite an expert on Swedish debating culture. He spent most of a year travelling around the country in an attempt to get the Swedes to talk.

It proved difficult. He did, however, manage to collect enough material to write a book entitled “Absolute Sweden” in which he characterises the country as “The Realm of Silence”.

“There is a lot of discussion taking place in Sweden,” he told the audience in Malmö. “But people rarely debate matters of import. That’s why I’m positively surprised that today we have a Free Press Society here in Malmö. I wouldn’t have believed that two years ago.”

Sweden wants to be best

Hans Rustad, the editor of the popular Norwegian website Document.no, had also made the trip to Malmö. He delivered a brief characterisation of Swedish immigration policies as it looks from a Norwegian perspective:

“Viewed from the outside, Sweden seems to have a great need to be the best. You want to be number one in goodness and tolerance, which is why you compete with other countries in the discipline of having the most liberal immigration policy.”

“But in the process you have given up your own identity and that is dangerous. That is why I wish the Swedish Free Press Society success and good luck.”