Last Friday a group of Austrian and German fraternities caused a big brouhaha when they met in Vienna for their annual ball. Public disapproval of the event was so severe that the “anti-fascists” were moved to attack the particpants physically, and even threw firebombs.

Our German translator JLH has translated two articles about the controversy, and includes this explanation:

I have translated two short articles concerning the annual grand ball held by the WKR — the Vienna Corporation Ring — one of those glittering affairs many of us may hear about, but never attend.

This ball — part of the Fasching/Mardi Gras/Carnival season in Vienna — reflects elegance, wealth and good works to further education. Representatives of about twenty corporations and academic organizations attend, and luminaries from the fields of science, politics and economics from Austria as well as Germany and other places are invited. It began in 1952 in the post-war British zone of occupation and has always been held on the Friday before the last Saturday of January. Along with another Vienna grand ball — the Rudolfina Redoute — it claims to be the largest celebration of its kind in the world. Since 1987, it has been held in the grand hall of the old imperial palace — the Hofburg. UNESCO declared the tradition of balls to which it belongs to be one of the cultural heritage treasures of Austria on its list of such treasures worldwide.

Well, sic transit gloria mundi, as they say or, as Forest Gump put it: s*** happens. UNESCO, no doubt hearing from a little left-wing or Islamist bird, discovered to its horror that this ball was considered a hate-fest, because — besides all the depraved capitalists and over-educated fops — it was attended by such ravening right-wing types as the head of the FPÖ! They might as well be from the — gasp! — Tea Party. UNESCO took no half measures; it struck the whole tradition of Vienna balls from its list of cultural treasures. The people administering the Hofburg decided it would not be available for this function after this year.

This year, Forest Gump’s prediction came true with a vengeance. The Friday before the last Saturday of January fell on the 27th — the day of remembrance for the Holocaust. Reasonably or not, the organization stayed with their traditional date of 59 years. You can get a little attached to routine when your history goes back to the 1200s, and your city was the seat of the Holy Roman Emperor, the King of the Romans, the King of the Germans, the Archduke of Austria, the Kings of Spain, Hungary, Portugal, Galicia, Croatia and Lodomeria and the Grand Prince of Transylvania, and your connection to the French Revolution was that well-known Austrian princess, Marie Antoinette.

That was all the so-called Antifa and other leftists — those well-known defenders of Jews and Israel — needed. They hit the streets with an energy equal to an Occupy crowd invading a bank. The result is described in one of the enclosed articles.

Then the left-leaning, PC-appeasing, so-called Israelite community in Vienna, which resembles actual Israelis as much as the Indianapolis Colts resemble real horses, filed a complaint against Strache for something he apparently was overheard to say while there. That is the second short article.

Anyway, it is in some ways a tempest in a teapot, but the winds on the surface of the tea are blowing from the left, just as they are in Cologne and elsewhere.

The first translation concerns the reaction of the antifas to last week’s event, and is taken from Junge Freiheit via SOS – Österreich:

From Schottengasse, we had to push through on foot. Directly in front of us drumming and roaring await. We can only try to bypass by way of the deserted Mölkersteig. Thee is a short moment of tense peace before violence rules in the Inner City. 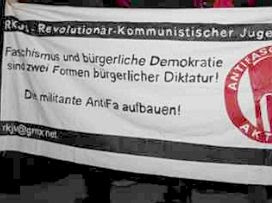 Demonstrators are waiting in Herrengasse. Nazi shouts and spitting are the overture to what follows. In front of Café Central, activists are blocking the street. A clueless policeman suggests getting to the Hofburg by way of Minoritenplatz — the route is secure. The information is wrong.

A crowd of demonstrators comes running from Ballhausplatz. In their eyes is pure hatred for those who are on the wrong side this evening. Young girls scream and spit. Blows, jostling and beer cans rain down on the perceived opponents. With our last energy, we run to the police barrier. There is help of any sort from the officers.

After three-quarters of an hour of running the gauntlet, we are in the Hofburg. “Were you attacked too?” asks a student in tails with color band and skullcap in German colors. It is the most remarkable moment of the evening, when those who have arrived feel something like relief for the first time.

“We ran like rabbits,” says a young man with a head covering. “The ladies were spit on, fell down. A shame.”

It’s hard to believe. This eye-witness account comes not from a rightist source. This report was volunteered by an undercover journalist from the Kurier! Imagine a future when this young hate-guard from the red-greens is sitting at the levers of power in the Viennese town hall.

Explosives, fire-bombs, violent attacks, street blockades which paralyze traffic in the Inner City, the most awful insults of police and ball attendees…and nonetheless organizers of this demonstration complain like fellow human beings about the — we would say tame — actions of the police. What does these leftists want? Call up anarchy in Vienna and declare all non-comrades to be fair game?

The banner in the photo reads:

[Does this have anything to do with “Arbeit macht frei” and “all animals are created equal”?]

The second article, also from Junge Freiheit, describes the condemnation of the FPÖ by the Jewish community in Austria:

VIENNA. The Israelite Cultural Community has made a charge of “relativizing the Holocaust” against FPÖ head Heinz-Christian Strache. The group criticized: “it is “a monstrous provocation” that on Friday at the Vienna Corporation (WKR) ball Strache said “We are the new Jews.” For this reason (the group continued) The FPÖ head’s [parliamentary legal] immunity must immediately be rescinded. 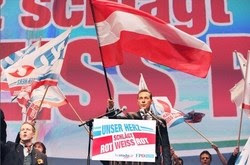 The background for this demand is the report in the Standard, after Strache had spoken these words in a private conversation on the edges of the ball. FPÖ general secretary, Harald Vilimsky, accused the left-leaning daily paper of listening in on conversations “like the Stasi” and then reporting them falsely.

“Nowadays, when someone uses fascist methods, it is the leftist extreme mob, which on Friday pursued reputable, blameless men and women and threw fire bombs at fraternity houses,” said Vilimsky.

The FPÖ general secretary also accused the Social-Democrat administration of the city of Vienna of failing to provide protection for those who attended the ball. “Apparently, the safety of respectable people attending the ball is worth less than the dubious right of leftist rabble to riot.” Greens and Social-Democrats. the FPÖ politician criticized, had made common cause with “an unsavory mix of German and Austrian leftist extremists to present security forces with the familiar anarchist and leftist political fringe groups.”

Those who attended the WRK ball reported to Junge Freiheit that leftist demonstrators were unimpeded as they pulled young women dressed for the ball out of taxis and attacked them. And that beforehand, several fire-bombing attacks were made on fraternity houses. For weeks Greens, Social-Democrats, the Israelite Cultural Community and leftist extremist groups had been speaking against the WKR ball, which is taking place in the Hofburg for the last time this year.

[Photo: Strache defends himself against complaints.]

9 thoughts on “The Anti-Fascist Waltz Comes to Vienna”