Media coverage of the Tea Party and the Occupy movement could not exhibit more differences.

Writing for the German information portal blu-News, Christian Jung analyzes the reasons for this imbalance. He demands from conservatives a more courageous stance vis-à-vis the leftist media, as well as a clear commitment to conservative political ideas.

The article below from blu-News was translated by the author:

Munich Freedom: On the Chutzpah of Being a Right-Wing Populist 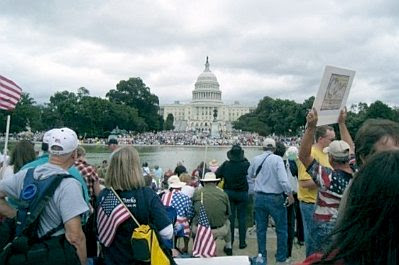 One of the most certain ways to create irritation is to tell a civil libertarian a lie or a leftist the truth. The latter has been painfully experienced by anyone who takes part in turning the direction of politics around to common sense. The leftist reacts severely to the point of ill-humor when one of his countless delusions is exposed. However, the leftist lauds anyone that collaborates in the 152nd attempt at creating the new person. Nowhere else is this so clear as in the comparison between the Tea Party and Occupy Wall Street movements.

Bash the Right, Court the Left

The Tea Party would like to bring about the end of irresponsible spending policies, and for this it has been portrayed by the left-wing press as right-wing radical, racist, homophobic and a great many other things as well. By working the Tea Party people over with a club taken from the sack of the politically correct press, the calculation is that they will be brought to silence.

The Occupy Wall Street movement, in contrast, has devoted itself to opposing evil capitalism. And immediately media support has flowed and keeps on flowing into this movement, which pits itself against the results of a real estate and credit bubble that was brought on by the government. The sympathies on this side and on the other side of the Atlantic will also certainly not disappear because of the attack by the Occupy movement on Oakland’s city hall. In spite of the more than 400 arrests of the left-wing activist rioters, and in spite of their demolishing city hall, they will certainly still have the support of the press in the future.

This message is conveyed on the “Nachtstudio” (Night Studio) TV show when representative Christopher Lauer of the Pirate Party asks himself, given all this injustice in the world, why doesn’t the Occupy movement finally resort to violence? Not the slightest breeze was detected from the otherwise tireless windmills of those charged with becoming outraged. At least not when a left-wing representative of a German parliament comes swaggering by in a chatty tone about taking the political debate to the battlefield, as if it were for Mommy to bake us some cookies.

Courage of Their Convictions

However, civil libertarians are not able to achieve their goal if they demand the same or at least reasonably fair treatment. Anyone who wishes to enforce a commonsense policy must be cut from hardened wood. Whoever does not see the State as the solution for all economic and other questions, but more as a problematic player, must have courage of his convictions. Thus it helps when he simply looks after the correctness of his arguments, rather than what leftists think about them.

Someone who works so long on the opinion he expresses that he comes to believe he has obtained the agreement of left wing is one who no longer forges his own policy. The oft-repeated refutation is that one shouldn’t make it difficult for himself. This is true. But one shouldn’t make it impossible, either. And it is impossible to make policy that is oriented against the leftists, while at the same time be applauded by them. Non-leftists are not applauded; more often, they’re gossiped about.

However, the one who believes in freedom from repression by others cannot be the first to suppress his own opinion. Without courage of one’s convictions — and the Tea Party example teaches this — the battle is already lost.

Right-Wing Populist? Why Not?

In order not to have a debate about the policies or the approaches of the civil libertarians here, the advocates of such things are simply given a label. A label that makes it clear how worthless any discussion really is. One that scares people off. One that connotes a danger to civilian existence. One that makes the non-leftist a non-person. Or, in other words, a right-wing populist.

Then this at least applies for me: I take pride in the words “I am a right-wing populist”!