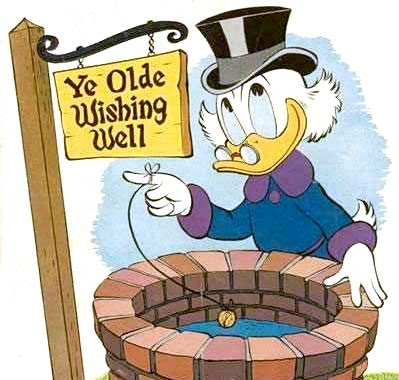 Our quarterly fundraiser is the Löbel Bastion of the Gates of Vienna enterprise, the last redoubt holding back the janissaries of poverty. It’s been breached and battered and patched back together out of old masonry, shattered wood, miscellaneous structural rubble, and anything else that comes to hand.

As the First Quarterly Fundraiser of 2012 boots the wolf from the door, this stout defender is asking for a name and a raison d’être.

Fortunately for us he’s not unexpected, so I give him his badge and a cup of coffee. At the moment this one is sitting meekly in the parlor, acting as though he were the resident expert. Let’s see how often he actually shows up once we get rolling.

Truth be known, we begin with a theme, but sometimes the bleg begins to run the show, ditching our theme, throwing away that badge, and pushing pedal to the metal all the way to the end. Let’s see where this one goes once we move into the Garden of Forking Paths.

We’re in mid-conversation here. Frugality is the “theme” and it’s a subject the Baron and I have been pondering since we met — often misunderstanding one another’s implicit communication. Example? The day we met, the Baron almost immediately told me he was a landscape artist. My interpretation? He was bragging about it, and oh, heavens, would I be able to ‘interpret’ his paintings? As I later learned, by telling me what he did, he was trying to warn me he was a starving artist. And I worried for nothing: it isn’t hard to interpret hay bales when they’re rendered in such detail.

Marriages have a better chance of success when the partners come from the same cultural milieu. We were fortunate that ours intersected at enough points to allow for mutually intelligible meanings. But the ride would get bumpy at those places where our meanings were polarized, or where our characterological differences made our perspectives 180 degrees out of synch. That’s where learning the rules of communication is essential.

And that’s why the subject of frugality has been a marriage-long entertainment. We’ve been poor and we’ve been “comfortable” — but mostly we’ve been poor. It’s a strange amalgam more common to this generation than to previous ones: having the luxury of education and the ongoing education of poverty. We loved the luxuries good pay allowed, but during those fleeting good times, the salary he earned always felt like Monopoly money to the Baron. Not that we didn’t squirrel away most of what the future Baron’s education didn’t eat, not that we didn’t turn from shopping at thrift stores to perusing catalogues, not that we didn’t enjoy sudden vacations… but these good things never lasted long enough to become Necessities.

And still we had Discussions. The Baron claimed we were rich. I laughed and said, “We’re only rich to us. The rest of our world thinks we’re living in genteel poverty.” We never had the opportunity to lay that one to rest, since our fall from grace back to what we’d always considered Reality came on with the first wave of mergers and down-sizing.

We weren’t nearly as traumatized as others, since we were so new to the game of prosperity. Neither of us ever believed we were cut from Middle Class Cloth, though we’ve accumulated some patches of it here and there.

On the roundabout to our theme: Frugality. Frugality is fraught, for sure. Fraught and fungible. Is frugality by chance, by choice, or cultural? Think of the cultures you know which are stereotypically proud of their frugality. Scotland is one. Scrooge McDuck is one of its American icons. Norway is another, though I didn’t know that until the Danes told me some stories to prove the point.

And even within frugal cultures, there are points along the line from Luxury to Necessity where people claim their perspective is the true one, even as they save rubber bands they’ll never use and wash out margarine containers for use at some future time that never quite arrives. I have postage stamps in my correspondence drawer that my mother removed from letters she’d never mailed, back when first class postage was a dime.

As inflation sets in, which it has again for some items, value (as related to the frugal life) becomes confused. Each generation has its set point regarding what everyday items “should” cost; as the train gets further from the station of their emergent adulthood, the prices get steeper and less meaningful. Consider it part of the stress of losing your youth: losing your price perspective.

Each culture’s foundation is economic. Man is the animal who barters and bargains. Some cultures (and sub-cultures) play fair — e.g. the Quaker businessmen in England whose intramural ethics revolutionized business behavior in general when the advantages became obvious. Meanwhile, some cultures consider bargaining a vitally entertaining pastime and those who refuse to play as cowards or poor sports.

Each economic class within a given culture has strict (if unwritten) rules about the use and abuse of money or barter. What constitutes correct behavior in one class is considered almost criminal in another. And in most cultures, money divides people into their respective classes. Or rather, money has come to constitute class, usually within a generation or so (see some of Takuan Seiyo’s ideas on this). No doubt intelligence will often prove the boost up to the next stratum, but I’ve known too many high I.Q. folks who couldn’t maintain in the face of a quotidian reality. So character and initiative and energy remain critical components.

Some of us straddle those fences, at least in the moment. The Baron can don his bespoke suit and set off for Washington D.C. looking like any other substantial bureaucrat — as long as you don’t examine his car closely, or check his socks (the shoes will pass). That much gets him in the door when he needs to be on the other side, which is not frequently. And it may be that eventually his late-chosen career as truth-teller will make him persona non grata once on the other side of those doors with his real name in view.

So be it. You pays your nickel (surely a dollar by now) and you takes your chance.

Does frugality exist anymore? Sure, especially for the unemployed or those with children, or those who want children. Does it even make sense? Yes, unless you have a trust fund; then it’s irrelevant if you don’t look too far down the road.

For the very very poor? Not so much. Frugality depends on a foundational sense that what one does with one’s time and talents makes a difference. Not everyone shares that reality. A poor person wins on a ten thousand dollar lottery ticket and his benefits dry up. The money is a burden until the spend-down brings his eligibility back.

During this First Fundraiser of 2012, we’ll be walking in the Garden of Forking Paths (if it’s not snowing too hard) to contemplate some of the incidents and accidents of wealth, poverty, and frugality. Theories of abundance and scarcity and which one appeals to whom.

We’ll examine again how little we understand one another — no matter our good intentions — outside our own enclaves.

9 thoughts on “Encountering Frugality in the Garden of Forking Paths”