Anestos Canelides returns with a brief meditation on the “evil” Crusades. 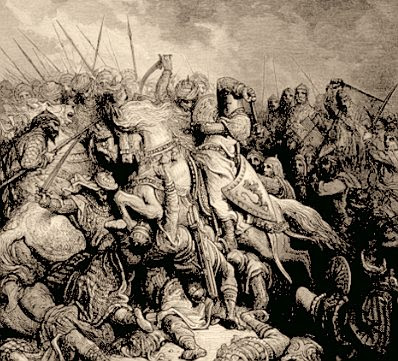 As long as I can remember I have been told about the evils of the Crusades, and how wrong they were.

One of the best articles I have ever read, one that really proves that much of what I was taught is a lie, is entitled “The Crusades in Context” by Dr. Paul Stenhouse. The Crusades were a delayed response to the invasion of Christian lands by the Muslims. It is true that atrocities were committed by the so-called Christian armies, but the Muslims initiated the warfare and committed innumerable atrocities of their own.

After the death of Muhammad, in 632 AD, Abu Bakr rose to power as the first Caliph, and that was when the invasions of the Roman Empire (Byzantine) began. These violent incursions ranged geographically from the Middle East to Spain in the west, and in the east of the Empire the armies of Islam showed up at the gates of Constantinople, only to fail after two attempts to seize the city.

Dr. Stenhouse focuses only on the invasion of Christan lands, but we cannot forget about the Islamic invasion of the former Persian Empire, and later in the 8th century the invasions of India.

I highly recommend reading Dr. Stenhouse’ essay in order to equip yourself better when your liberal, or non-religious, or historically illiterate friends ask, “What about the Crusades?” I have gained more wisdom about the Crusades, thanks to articles such as this one, and through other research.

I also suggest reading “The Politically Incorrect Guide to Islam and the Crusades” by Robert Spencer to further your understanding of the true context of the Crusades.

29 thoughts on “Those Evil Crusades”