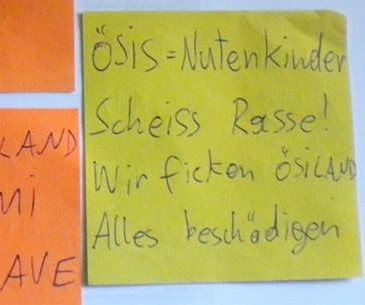 Our Austrian correspondent AMT sent us a tip about a post at SOS-Österreich, and included this note:

The following papers were left in the mailboxes in heavily subsidized public housing (Gemeindebau) in Vienna. These public housing projects were for many years voting strongholds for the Vienna SPÖ (Socialists). This has changed dramatically in the past few years, ever since the SPÖ city council “opened” the housing to non-Austrians.

These immigrants, who more often than not have a non-European background, did not integrate (at all) and caused much resentment among the native Austrian renters. It is little wonder that SPÖ voters feel abandoned, thus leaving the once heavily contested Gemeindebau to FPÖ (the Austrian Freedom Party).

The article at SOS-Österreich (motto: “For the protection of our homeland, culture and tradition — but not politically correct!”) was accompanied by photos of the handwritten hate-messages. Many thanks to JLH for translating everything:

Renters found these notes in their mailboxes. And no one cares…This should be investigated. And who claims responsibility?

These notes were found in the mailboxes of several renters. It has to do with M… Street 1-5. Also the abusive comments that we should leave, because we don’t have any children and they need big living spaces. The filth is getting worse and worse.

We believe this hatred of Austrians is being demonstrated in the Murhofenweg Council development in Vienna, Simmering.

A former SPÖ stronghold in which the FPÖ reached 40% in the last general election!

(Below, some further statements from the renter comment site for Viennese council flats):

One thought on “Special Delivery”