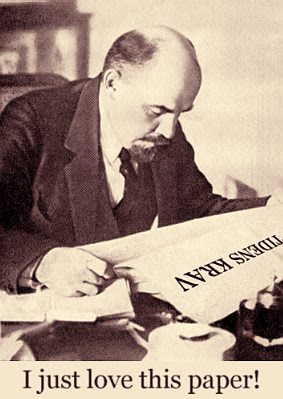 Our Norwegian correspondent The Observer sends the following translation, and includes this note:

This article published in Aftenposten a couple of weeks ago concerns the independence — or lack thereof — of the Norwegian media.

In addition to the information presented in the article, it’s worth mentioning that the Norwegian state is handing out Nok 6 billion each year in so-called “media subsidies”. It certainly raises some question about impartiality of the media in the country.

American readers will notice that the mass ownership of local newspapers in Norway parallels what happened here when Gannett acquired most of the larger local papers in the country, as well as dozens of TV stations. We don’t have a comparable level of state subsidy, but our small media outlets are now largely franchises of the conglomerates.

Here’s The Observer’s translation from Aftenposten:

When LO controls the newspapers

A-pressen recently acquired Edda Media, and with this latest acquisition will be the biggest proprietor of local newspapers in Norway, excluding the big regional newspapers in the larger cities. From a strict industrial perspective this is a sound business strategy; in light of the future that the media in Norway is facing, with a handful of big media conglomerates. But this is not in itself the main problem. The big question is whether the large trade unions and the political establishment are going to be allowed to dictate the agenda of Norwegian local newspapers, and in addition how this influence will affect the various local democracies

Every Norwegian newspaper is run in accordance with the Norwegian media code of ethics (Redaktørplakaten og Vær varsom-plakaten). The independence and integrity of the newspaper editor is a given in our society, including the newspapers owned by A-pressen. But in what way can such an ownership structure constitute a problem? Well, it can, because the powerful ones always exert control.

This is how it works: the owner (LO / trade union) exerts influence over the company’s guidelines and who gets elected to the board. They also exert considerable influence over the hiring processes of the CEOs and board members of the various newspapers. This board is then responsible for appointing the various editors. This is as far as A-pressen influence reaches, but this is also more than enough. The various newspaper editors hold considerable power in the editorial boards and they are the main suppliers of the editorial contents.

DN (Dagens næringsliv) published an article in 2008 which revealed that Jens Stoltenberg and Jonas Gahr Støre (Labour Party) had had dialogues with then-chairman Knut Brundtland and director Stig Eide Sivertsen, concerning the hiring of A-pressen’s new CEO. LO’s preferred candidate was Jan Erik Larsen, then editor of Tidens Krav, which coincided with the wishes of Stoltenberg and Støre. Former Telenor CEO Stig Eide, Sivertsen who at the time was a member of the board responsible for selecting the new CEO, told Aftenposten that he did not succumb to any outside pressure. The position was eventually awarded to Even Nordstrom, and Jan Erik Larsen was “instead” given the job as chief Secretary at the Prime Minister’s office in 2008.

This incident clearly demonstrates that there is a desire and willingness within the political establishment to wield power and to influence decision making processes. A-pressen’s current CEO Thor Gjermund Eriksen is a skilled media man, but he also has his “party book” in order (member of the Labour Party). A-pressen will with this latest takeover own approximately 100 of the most important regional and local newspapers in the country. In Norway local newspapers have a very important role in their communities — and these newspapers are the most important suppliers of opinions. We need to ensure that all views and opinions are going to be respected — and that they are edited by individuals who are hired solely based on merit. It is not a question about the personal integrity of the editors; on the contrary, Norwegian editors in general are rock solid. The question is who gets to select them.

A-pressen’s mission statement should be changed, and LO should withdraw its ownership of the conglomerate.