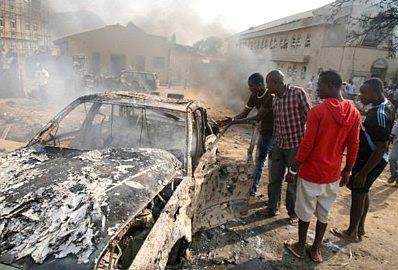 For the last few days I’ve been tied up with programming work, unable to do much in the way of blogging. However, I kept on monitoring the news feed items as they came in, and skimmed off the most disturbing stories that cried out for special attention.

The fabric of the civilized world seems to be disintegrating before our eyes. What — besides the fact that they all involve Muslims — do these gruesome news items have in common? Why do they seem connected? Are there any clues?

The first clue may be found in the official reaction to the Christmas bombings in Nigeria. The Pope responded immediately:

President Obama followed suit in short order. Or rather, the “White House” did — the building is authorized to speak in his name when the president is vacationing: “The White House condemned the violent attacks in Nigeria”. The building was unable to bring itself to mention Islam, but it did deplore the “senseless violence and tragic loss of life”.

Our leaders are adept at condemning and deploring. That’s what they do best. And, when things get really nasty, you can count on the functionaries at the U.N. to “express grave concern”. They’re dusting off the thesaurus right now in anticipation of what Iran may do in the Strait of Hormuz. “Severe displeasure” may be appropriate, but if mushroom clouds appear, escalation to “grave concern” may become necessary. And maybe even additional economic sanctions, if the bureaucrats of Turtle Bay really want to show how tough they are.

Don’t get me wrong: I’m not in favor of expending American blood and treasure to keep third-worlders from blowing each other up. But all this condemning and deploring is the official equivalent of teddy bears and candlelight vigils. It’s yet more evidence of the utter impotence of the deracinated formerly Christian remnants of Western Civilization.

The Pope and the President of the United States are tacitly affirming that nothing meaningful can be done about the destruction of our culture.

Nigeria lies squarely on the Bloody Borders of Islam, and what happened on Christmas day is what we’ve come to expect in non-Muslim areas that are in the process of becoming Muslim. Nigeria is now roughly 50% Muslim, so it is poised on the brink.

Although it has a much lower percentage of Muslims, Uganda is experiencing its own anti-Christian jihad. In another Christmas atrocity, Muslim attackers threw acid all over a Christian pastor in Uganda:

The health of Pastor Umar Mulinde of Gospel Life Church International who was attacked with acid on Christmas Eve, is improving.

Speaking exclusively to the New Vision, Mulinde said he felt some improvement in his condition. He said the pain all over his body had greatly reduced.

“I am recovering. Experts are monitoring my condition and they have promised to do their best to help me recover,” Mulinde, who is currently admitted at International Hospital Kampala (IHK), said.

He is under strict guidelines by doctors at IHK not to talk for long, as this affects the sores on his lips. The doctors are struggling to restore his sight after his right eye was affected during the attack.

“My right eye which had closed has been opened. But I cannot see anything at the moment,” Mulinde said.

Unknown people laced Pastor Mulinde with acid as he left his church, leaving his face, neck and other parts of his body severely injured.

Pastor Mulinde may have been targeted for converting from Islam to Christianity:

On Monday, Pastor Mulinde blamed the attack on religious fanatics opposed to his conversion from Islam, as well as his strong critique on the faith during religious debates and sermons.

As we all know, by daring to leave the Religion of Peace, apostates face the greatest risks.

Leaving the Bloody Borders behind, we move on to Afghanistan, into the Heart of Darkness itself.

NATO didn’t conquer Afghanistan; we “liberated” it. Then we recruited and trained its soldiers. They are now our “allies”. Nevertheless, with disturbing frequency Afghan soldiers take it upon themselves to attack and kill the infidels in their midst:

A man dressed in Afghan army fatigues on Thursday shot dead two French soldiers in what appeared to be the latest attack by a member of the Afghan security forces on NATO troops. The Taliban claimed responsibility, saying the soldier joined the army in order to carry out his attack in Kapisa province, in the volatile east of the country where many of the 3,700 French troops in Afghanistan are based. The insurgent group, which has been waging a 10-year insurgency against US-led NATO and Afghan forces, also said they carried out a roadside bombing in the southern province of Helmand that killed 10 local police.

Another news article from Afghanistan describes what Muslims there do to each other — or, more precisely, how a Muslim society treats its women. A fifteen-year-old wife was locked in a toilet by her in-laws and brutalized for months because she would not agree to become a prostitute:

Afghan police have rescued a teenage girl who was beaten and locked up in a toilet for over five months after she defied her in-laws who tried to force her into prostitution, officials said Tuesday.

Sahar Gul, 15, was found in the basement of her husband’s house in northeastern Baghlan province late on Monday after her parents reported her disappearance to the police.

“She was beaten, her fingernails were removed and her arm was broken,” district police chief Fazel Rahman told AFP.

Three women including the teenager’s mother in-law had been arrested in connection with the case but her husband had fled the area, he added.

Notice that Muslim men were not the sole perpetrators of this degradation against the young girl — they relied on the active collaboration of female members of the husband’s family.

The situation ought to be different for Muslim women in the West. Canada lies far outside the Bloody Borders, but not far enough to help the first wife and three daughters of Sahar Shafia. All four were drowned in a canal to protect the family’s honor.

How about Texas? In yet another Christmas Day massacre, Aziz Yazdanpanah shot and killed six people, including his estranged wife and two children, before killing himself. Was the incident another “honor killing”? The family, originally from Iran, seemed to be fully secularized, celebrating Christmas and generally acting like ordinary Americans.

Yet there were hints that “honor” might indeed have been involved. Interestingly enough, the local police force has no interest whatsoever in determining what motivated the killer:

The Grapevine police department remained silent even as wild theories have been circulating in local media regarding the killer’s motive.

“Motive is not really the primary point right now,” said Grapevine police Lt. Todd Dearing. “It’s more along the lines of what happened, how it transpired and making sure that who we believe to be the shooter is the shooter. Motive is what comes afterward for us if we can get it,” he added.

Why this reluctance to examine the full story? Is there something going on that we would rather not look at?

To see this thing-that-must-not-be-mentioned in a more fully developed state, we must travel to Britain. Every day there are more incidents of culturally enriched robbery, rape, murder, and mayhem in the United Kingdom. Every day you find stories like this one in the British newspapers:

A woman has been found stabbed to death after a sobbing schoolboy turned up on a neighbour’s door covered in blood.

A man was also discovered with injuries and is in hospital in a critical condition after the double stabbing earlier today in Wolverhampton.

The child, believed to be of secondary school age and the son of the couple, fled the bloody scene to raise the alarm.

The man in his 30s and woman, 36, were discovered at the address at about 7.47am after police arrived at the gruesome scene.

One neighbour said: ‘We heard the little lad was covered in blood and crying uncontrollably when he knocked on a neighbour’s door, that’s when police were called.

Carol O’Mahoney, another resident who lives nearby, said: ‘Neighbours said they had a five-year-old boy and that the little one was seen running from the house for help this morning covered in blood.’

Police have said they are not looking for anyone else in connection with the incident which happened in a house that is used as temporary accommodation in the Whitmore Reans area of the city.

The family is believed to be of Iranian origin and West Midlands Police have launched a murder inquiry.

Or this one — another Christian convert killed by a Muslim. But this story has an unusual twist: the murdered young woman came from a Sikh family that had become Christians:

A Christian convert whose body was found dumped in a canal on Christmas morning was the mother of a month-old baby boy, it has emerged.

Manzar Juma, 27, the father of two of her children, was charged by police with her murder. He is understood to be Muslim and unemployed. He is due to appear in court on Friday.

Miss Love was born Rabina Malik into a Sikh family but her mother changed the family’s names by deed poll in 2003. They attend a nearby Catholic church, she said.

Afghanistan is a fully realized Islamic culture, so women there may be raped, stoned to death, and locked up in cellars by their in-laws. The perpetrators of such deeds may act with impunity because they live in an environment where Islamic law reigns supreme.

Nigeria is in the process of becoming a fully Islamic environment. Bombs and rapes and massacres targeting Christians and other infidels are part of the standard procedure during the later stages of Islamization. By such methods non-Muslims are driven out or persuaded to say the shahada and join the Ummah, clearing the ground for the eventual imposition of sharia.

Here in the West we are in the very early stages of the same process. But our own fecklessness is accelerating the rate of Islamization in our culture. By ignoring, refusing to see, explaining away, and otherwise denying what is happening before our eyes, we are allowing the Hosts of Mohammed to accomplish in mere decades what took them centuries to achieve in the Near East and India.

There are plenty of clues. The handful I have collected here is just a tiny sample of what may be found in the news media every single day.

We have enough evidence to make a case for deploring what is happening to us. We condemn those who are doing it.

And special attention should be paid to the political elites throughout the West who have abetted and encouraged the Islamization of our nations. Their abject betrayal gives us more than enough reason to express our grave concern.