Earlier this month a group of “youths” attacked a Hare Krishna temple in Copenhagen, doing damage and trying to attack the temple’s devotees with baseball bats. Strangely enough, the story never made it into the Danish MSM.

Here’s the story from Sappho, the Danish Free Press Society’s website. Many thanks to Hans Erling Jensen for the translation:

The Hare Krishna temple in Vanløse (Copenhagen) was attacked by young Muslims on December 6. It started when young Muslim terrorists threw stones, and later, armed with clubs, tried to break into the temple. 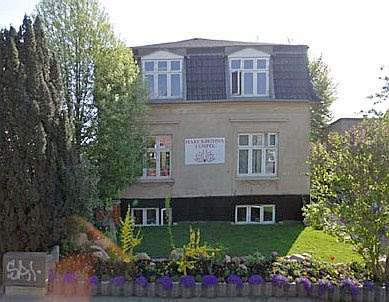 The award-winning blog Uriasposten received an internal email from the temple, describing the incident in detail.

Sappho called the temple, which confirmed the attack. The violence happens as a result of the many calls for attacks — and attacks now happening — against non-Islamic groups in Islamic countries.

The temple is now urging its supporters not to wear the distinctive orange robes near the temple to avoid physical attacks.

The reason for the attack in Copenhagen may have been that a Muslim motorist was annoyed that a Hare Krishna follower criticized his awkward parking.

Extract from the Hare Krishna email (translated from English [and then back into English]):

On Dec. 6 pm. 20.45 The temple in Copenhagen was attacked by a group of young people who obviously had a Muslim background. The first stone was thrown at the front of the temple, smashing the window of mathaji asrama.

The temple president summoned the police immediately. A single police officer arrived and took note of the damage.

Half an hour later a large group of the same attackers arrived, threw stones into the garden and smashed windows of the Tulasi room and all the lower windows facing the street. Finally, they tried to enter the house, to instigate a direct physical confrontation. …

Police assistance has so far been minimal. It took them over half an hour to come, and at the second attack they did not come. If the attackers had succeeded in entering the house, people might have been killed, because the attackers were armed with baseball bats and other weapons. Seen from the window most of them seemed to be under 18, and several of them could not even speak proper Danish.

When unknown assailants tried to set fire to a mosque in Brønshøj, it was in almost all media.

The Muslim attack on Hare Krishna has still not been mentioned anywhere in the mainstream media.