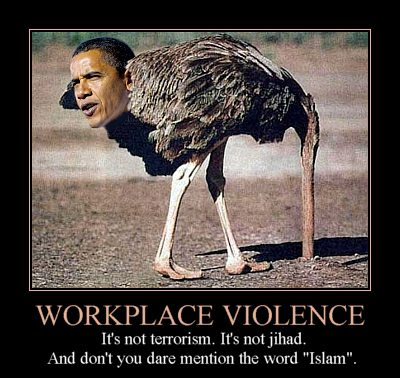 While our President seeks to euphemize the terrorists’ attacks inside our borders [see the Baron’s report] Congress is taking a harder look at the specifics. Here is part of their executive summary:

More than 2.3 million Americans in the military have volunteered to go into harm’s way overseas to combat terrorists since 9/11. But these heroes “who shall have borne the battle,” as President Lincoln called war veterans, also have been in danger here at home — where they should be safe and secure. The threat is real. The Department of Defense considers the U.S. Homeland the most dangerous place for a G.I. outside of foreign warzones — and the top threat they face here is from violent Islamist extremists. While our troops at overseas bases train their weapons outward to prevent armed enemies from getting “inside the wire,” one way militant Islamists are penetrating our defenses is through enlistment in the U.S. Armed Forces. A significant and growing number of military personnel, such as alleged Fort Hood mass murderer Army Maj. Nidal Malik Hasan, pose a serious danger to their brothers and sisters in arms who wear the same uniform.

At least 33 threats, plots and strikes against U.S. military communities since 9/11 have been part of a surge of homegrown terrorism which Attorney General Eric Holder has said “keeps me up at night.” After Al Qaeda leader Osama Bin Laden was killed May 1, the Department of Homeland Security, Federal Bureau of Investigation and Defense Intelligence Agency warned thousands of U.S. law enforcement and security agencies about possible retaliatory attacks by Al Qaeda, its allies or unaffiliated homegrown terrorists on our military. Weeks after the Pakistan raid, two radicalized U.S. citizens allegedly plotted to attack military personnel in Seattle.

The Majority Staff of the House Committee on Homeland Security has been conducting an investigation, which finds that 70% of the plots against military targets occurred since mid-2009 — including the two successful homeland attacks since 9/11. Other key findings:

See the full PDF report here, The Threat to Military Communities Inside the United States

*   *   *   *   *   *   *   *   *   *   *   *   *   *   *
For President Obama the horrific reality of terrorism is resolved easily: just call it something else. This Saul Alinsky language maneuver doesn’t work at the national level, Mr. President. Nor does dumbing down those deaths with banal terms create the sense of respect all service personnel hope to feel regarding their Commander-in-Chief. Perhaps you need another vacation or three. We’ll take up a collection and send you a Thesaurus for Christmas Winter Festival. Sir.

This image was a collaboration between me and the Baron. I had the idea, but not the means for carrying it out. The Baron was kind enough to make my concept a reality. Surely it captures perfectly the notion of someone who speaks from an alternate orifice?If others find it useful for their projects, feel free to disseminate. I’m sure there is a supervisor out there who deserves this particular photoshop job.

9 thoughts on “All Obama Needs for Christmas Is a Thesaurus”