I’ve had to break the alphabetical order of our fundraising testimonials — and also add an eighth day to the week — to include one more encomium. It didn’t arrive until yesterday afternoon, so that’s why it’s out of order.

It’s a signal honor to post an endorsement from Martin Bosma, a member of the Dutch Parliament for the PVV (Partij voor de Vrijheid, or the Party for Freedom). Longtime readers of Gates of Vienna are familiar with his work through a number of translated articles and videos that have appeared here in the last few years.

Mr. Bosma also sent us this brief bio, which I have augmented by including a mention of his book, which was published last year (still in Dutch only, as far as I know): 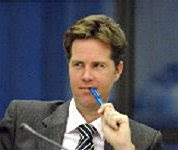 Martin Bosma was the first to join Geert Wilders when he broke away from his original party. He has been a Member of Parliament for the Freedom Party since 2006. He is also deputy-chairman of Dutch Parliament, secretary of the Freedom Party faction in Parliament, and president of the Taalunie, the quasi-governmental organisation that promotes the Dutch and Afrikaans languages. He is the author of The Pseudo-Elite of the Counterfeiters, and a proud donor to Gates of Vienna.

And his endorsement of our blog:

To all you GOV readers,

Gates of Vienna is my daily stop when it comes to news on Islam, and other parts of life. Hey, I can’t waste my time too much on the MSM. That the gates of Vienna are protected and defended by people on the other side of the ocean is a mere disgrace to us living here on the continent. Again, Americans fighting for Europe’s freedom. It’s both stimulating, and embarrassing.

Baron Bodissey and Dymphna are two wonderful creatures who have been in the forefront of our fight for many years. They deserve our support. I understand Baron and Dymphna live in Virginia, the state that was once the home of Thomas Jefferson. They indeed make the man of Monticello proud. It is his tradition of liberty that they honor. Baron and Dymphna are true citizen-warriors, and they walk in a long tradition — a tradition that represents the best of America, and the reason why I hope the US remains the world’s last superpower for decades to come. (Preferably with someone else in the White House, but that is up to the American electorate, not me.)

I had the privilege of meeting the Baron once — in Diana West’s kitchen. She had thrown a party for Geert Wilders, but he called in sick, so I had to fill in for him. The Baron left me with a feeling that he is one of those rocks America is build on: ordinary folks whose heart is in the right place and have a natural understanding of the value of freedom. Just like those GI Joes that liberated my country in 1945. America never had nobility. But if it had, it would consist of Dymphna and the Baron. They honor freedom more than any politician ever can.

May Dymphna and the Baron live a long live, enjoy prosperity and receive many donations.

The Dutch are known to be frugal. As a matter of fact, copper wire was invented by two Dutch folks fighting over a cent. I guess our wealth was founded on our unwillingness to spend money. But I suggest we make an exception for our heroes in Virginia. This is not a time to let them go Dutch. Therefore, my fellow-cheese eaters: Niet zeuren, maar gireren. Beurzen open, dijken dicht!

People who don’t eat cheese are also welcome to hit the tip cup. In fact, some of yesterday’s donors came from places that may not be particularly turophilic:

Our deepest gratitude to all who have donated so far.

Today is the last day of our quarterly appeal. Tomorrow, if she is well enough, Dymphna will write the wrap-up.

2 thoughts on “Eight Days a Week”