As reported at Snaphanen, Tommy Robinson, Kevin Carroll, and other English Defence League members invaded the offices of FIFA (the world soccer organization, Fédération Internationale de Football Association) in Zurich today. The EDL leaders were there to protest FIFA’s decision to forbid the English football team from wearing poppies during their next match.

As a part of their tour of Zurich, Tommy and Kevin visited the roof of the FIFA building: 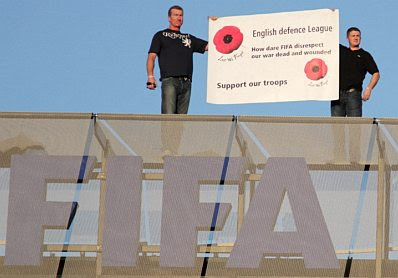 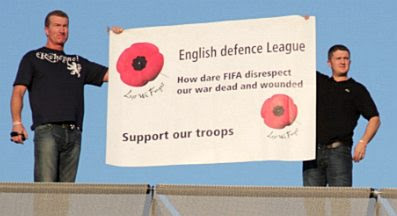 
Many thanks to Steen for uploading this video:

FIFA now seem to have backed down:

Fifa has agreed that the England, Scotland and Wales teams can wear poppies on black armbands during the upcoming internationals.

The move came after Prince William and Prime Minister David Cameron wrote to Fifa asking that England be allowed to wear shirts embroidered with poppies.

England and Wales have agreed to the compromise. Scotland will consult their opponents before making a decision.

England will wear the armbands in Saturday’s friendly against Spain.

“The FA welcomes Fifa’s decision and thanks them for agreeing to this,” the Football Association said in a statement.

The Football Association of Wales confirmed its players will wear the armbands for their match with Norway on Saturday.

Scottish Football Association chief executive Stewart Regan said they hoped to adopt the same approach for the friendly against Cyprus in Larnaca on Friday night.

Regan said: “The decision is a pragmatic solution to the fact that Fifa’s rules forbid the wearing of the poppy on the match shirt.

“Subject to the approval of the Cypriot FA as the host nation we will also adopt this approach in our friendly match on Friday night.

“We believe this is a fitting way to show our respect for those members of the armed forces who have lost their lives fighting for their country.”

The Fifa announcement of the compromise came shortly after it was revealed that the Duke of Cambridge had written a letter to world football’s governing body in his position as president of the FA.