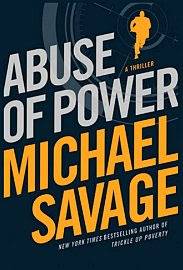 Abuse of Power is a thriller written by wordsmith and radio presenter Michael Savage. Known for his conservative talk radio show and several politically-charged books, Savage has diverged into the world of fiction. The novel is about a news correspondent named Jack Hatfield who follows a suspense-filled trail from the streets of San Francisco to Tel Aviv, to London, to Paris and then back to San Francisco.

Following various clues with the help of a beautiful Muslim woman named Sarah Ghadah and a variety of other characters, he foils a 9/11-style terror attack. By a series of outcomes, fate directs Hatfield to stop a radical Islamic group called the Hand of Allah. A string of events uncovers a conspiracy that will lead all the way up to the halls of power, both in Washington D.C. and London.

This novel beautifully portrays the struggle between good and evil, as Jack risks everything he values, including his life, to stop the hand of Allah.

The author makes it very clear who the enemy is, and differentiates between radical Muslims and those who are truly moderate. In the novel, Jack Hatfield is wrongfully banned from England much in the same way as in real life Mr. Savage is banned there today.

This book is riveting, and it kept my interest for the entire week it took to finish it. My eyes were glued to pages full of intrigue for hours at a time. I thoroughly enjoyed its powerful connection to currents events. With an imaginative intellect and a knack for character development, Savage reflects present-day reality so well that I found myself wondering if I had heard it on his radio show rather than read it in his new novel.

The book is written so well that in my mind’s eye, as I read the events of novel, I envisioned it as an action-packed movie. In many ways the character Jack Hatfield resembles the character Jack Bauer, as played by Kiefer Sutherland in the successful TV series 24. The story is so full of twists and turns that it is difficult to predict what will happen next.

Michael Savage an excellent story teller. His main character is representative of the majority of Americans, who are largely conservative and want to protect our country from the enemy within and without. Jack Hatfield in many ways reflects Savage’s own desire to save America from the threats we face today.

On a scale of one to ten, I would rate this book a 10. Whether you’re conservative or liberal, I recommend that that you read Abuse of Power.

4 thoughts on “Abuse of Power”