This is the second of an eight-part history of the Transatlantic Counterjihad. Part I is here.

Many thanks to the Counterjihad Collective for all the effort that went into this project.

The first Transatlantic Counterjihad conference was organized in the spring of 2007.

The online activities of the 910 Group had brought anti-sharia activists from Denmark, Britain, and the USA into contact with one another, and the Mohammed Cartoon Crisis had brought Denmark into prominence, so Copenhagen was the obvious choice for a venue. The UK and Scandinavia Counterjihad Summit was held there on April 14, 2007, under the auspices of Stop the Islamization of Denmark (SIAD).

The purpose of the meeting was to bring various groups into face-to-face acquaintance with one another, and to share information that would help them formulate strategies to oppose sharia and resist Islamization in their various countries. Representatives from Denmark, Norway, Sweden, the UK, and the USA were in attendance. For a report on the afternoon’s events, see this Gates of Vienna post. 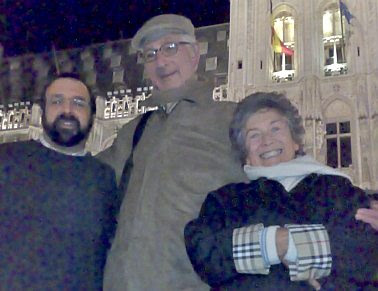 Guest speakers were featured at the first day of the conference, which was held in the European Parliament building. The presentations were of two types: a speaker for each of the European countries that participated gave a report on the level of sharia and Islamization in his or her own country, and these country reports were interspersed with speeches and audio-visual material on topics of general interest to the Counterjihad.

Dr. Eldad’s presentation was particularly important, since the position of Israel is so crucial to the rest of the Western world. Israel, as a bastion of democracy in a despotic region, is on the front lines of the resistance to jihad. One of the major points of agreement among the participating organizations was the necessity for support of Israel.

On the second day, the conference reconvened at the Flemish Parliament. The day’s events consisted of workshops and a final plenary meeting before the conference concluded. During the day attendees broke up into smaller groups and attended facilitated workshops on practical ways to effect political and legislative change that could slow the spread of sharia in Europe.

Counterjihad Vienna was held on May 11-12, 2008. This meeting took the form of facilitated workshops interspersed with talks and general discussion. Topics included civil liberties, the repression of free speech, and the implications of the proposed European Arrest Warrant for activists who oppose sharia and Islamization.

The evening keynoter on the 11th was Serbian-American historian Dr. Srdja Trifkovic, whose expertise on the Ottoman conquest of the Balkans provided a fresh perspective on Islamization.

A transatlantic leadership group convened for Counterjihad Copenhagen on May 16-17, 2009, with attendees from Austria, Denmark, Finland, France, Germany, Hungary, Romania, Serbia, Sweden, Switzerland, the UK, and the USA.

This meeting took the form of facilitated discussion groups held in the plenary. The sessions focused on helping different groups improve their organizational skills, suggesting different techniques that could be adapted for the unique circumstances found in individual countries.

Topics covered included media operations, security, the use of the internet, international coordination of anti-sharia action, and strategies for dealing with the growing repression of free speech in Europe.

Counterjihad Zurich, held on June 12-13, 2010, followed up on Copenhagen with a continuing emphasis on intensifying cooperation and sharing of information among different groups and networks. Representatives came from Austria, Denmark, France, Germany, Switzerland, the UK, and the USA.

As in Vienna and Copenhagen, the sessions were mostly in workshop format, with moderated general discussion in a roundtable format. The English Defence League, which had come into being and risen in importance since the previous year’s meeting, was one of the prominent topics.

The Swiss People’s Party (SVP) was represented at the meeting, and an SVP member gave an outline of his party’s successful referendum campaign that imposed a ban on the building of new minarets.

Other topics covered included strategies for proposed parliamentary legislation, encroachments on freedom of speech, and the opportunity offered by the Organization for Security and Cooperation in Europe (see the detailed section on the OSCE, below).

In the two years since the formation of the English Defence League in 2009, events in Britain have galloped ahead of the rest of Europe. As the only significant grassroots anti-sharia movement in Europe, the EDL was the one of the major topics of Counterjihad London on September 24-25, 2011.

Islamization has perhaps proceeded further in Britain than in any other European nation. At least eighty officially-sanctioned sharia courts are now operating in the UK, and Muslims have gained political control of the mayoralty in the borough council of Tower Hamlets. Critics of sharia are marginalized, demonized, harassed, and prosecuted.

The purpose of the two days’ meetings was to bring the EDL together with other interested groups, including action-oriented people whose goal is to form a new political party having opposition to Islamization as one of its major policy positions.

[In the weeks since the meetings in London, Paul Weston was elected chairman of British Freedom, and the EDL announced its support for the new party.]

In addition to the UK, representatives from Austria, Canada, Denmark, Finland, France, Germany, Italy, Norway, Sweden, and the USA were present, bringing an international perspective to the discussions of British issues.

Conferences Not Sponsored by ICLA, But Attended by ICLA Members

Panel Discussion In Vienna, November 11, 2008, sponsored by the Akademikerbund, Vienna,

Next: Part III(a), The Transatlantic Counterjihad at the OSCE

Photo credits: The Bat Ye’or composite and the view of the plenary in Brussels are © Snaphanen).

3 thoughts on “A Brief History of the Transatlantic Counterjihad, Part II”