His report is below.

Speaking of Free Speech in Auburn
by LAW Wells

On the evening of Friday September 23, I was in Auburn for an ISRA (Islamic Sciences & Research Academy of Australia) sponsored lecture by Justice John Dowd, Chancellor of Southern Cross University and former New South Wales Attorney General and state Supreme Court judge. I had arrived quite early, and was amused (but hardly unsurprised) to note that right next to the ISRA office was a “diversity training” school.

Having arrived quite early, I pulled out Chesterton’s The Everlasting Man to try and enlighten myself a bit more about the faith that is my own (and had recently read his neat lancing of the boil of Islam’s unbendingly unitary divinity as part of his chapter on the heresies). Certainly, one could not deny the hospitality of the Muslims there and their attention to their guests. 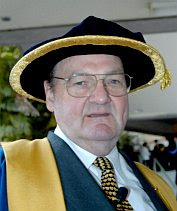 Alas, if only their speaker had been so attentive to us and to his own self been true.

Justice Dowd arrived ten minutes late with the imam of the local mosque, Sheik Hasam Farash. After a formal introduction and much praise lavished, we finally began the lecture. Justice Dowd began by pulling out a small pocket version of the Universal Declaration of Human Rights. He waxed lyrical about it, and observed that the West today has been forced into a position of culture clashes due to multiculturalism as customary laws such as Sharia come into conflict with the universal and equally applied law of the West. He said that those who live under different systems have difficulties understanding our laws and systems.

He finally came to the topic just after 8pm, about fifteen minutes into his lecture, and began to talk about the reasonable limits to free speech such as defamation, court suppression orders and contempt of court. He also brought up the Australian anti-terror laws, though he misrepresented them quite grossly (he stated that one had no right to contact anyone, when in point of fact you did have the right to one and only one phone call — big mistake for a lawyer and judge to make). It told me all I needed to know about his partisan nature on that debate.

He also brought up issues of democratic law and oppression, such as the case in Sri Lanka with the Tamil Tigers, blasphemy laws under the Church of England (back when it actually was a church), and Contempt of the Parliament.

And then, he admitted that he wrote the New South Wales law on racial vilification primarily to “change the culture”, and also admitted that he had received pressure to include religions. It was pressure he resisted though, and this being the late 1980s, religious “defamation” was a non-issue.

However, Justice Dowd then stated that in cases of so-called “honour” killings and female genital mutilation, Australian law (which forbids such practices) would win out over any customary law that rendered them legal (specifically Sharia).

Even so, he then stated that one had a right to be free from vilification and pointed out that this restricted free speech. He also gave the Muslims present a quick briefing on a way to implement some creeping Sharia in the laws governing the distribution of the estate of a deceased person, using the precedent of Aboriginal law being included as a consideration if it ever came to before the arbitration courts.

With that, Justice Dowd gave way to Sheik Farash at the podium. He gave a much shorter lecture as a follow-on. He said some very odd things, though. He declared Dar al Harb, the House of War, to be a place of anarchy with no rights, and therefore made the implicit assertion that Australia is part of Dar al Islam (though he didn’t say it outright). He also made the oft-repeated line that Sharia and Western (in this case, Australian) law were highly compatible (he said 97-98%), and that to bring full alignment required changing us and then effecting a system-wide change.

After his talk came a question and answer session. I got in just at the end with a question regarding child marriage. I also asked an add-on question about the raising of these issues being construed by Muslims as vilification.

Here Justice Dowd really galled me. Rather than assert the universal primacy of the Universal Declaration of Human Rights that he had so greatly relied on, he actually rationalised the institution of child marriage in a Muslim country like Bangladesh. He called it a way of basically minding children while parents went out to work. The lines of economic reasons, social construction especially regarding rape, and physical maturity (arguing by analogy to promiscuous Western teenagers) were also brought up. Revision of this element of Sharia was brought up, though I question its ability to go against the strength of Mohammed’s scriptural example with Aisha.

The vilification part was almost forgotten, but when it was brought up, it was dismissed as a general resentment, a form of mental transference, and politicians feeding injustice. Sheik Farash brought up what he termed “un-Islamic” responses to criticism and mentioned those who “abuse Islam”, with an added “as you know” just to reinforce the meme.

Other cases from Australia’s past were also brought up — the Yellow Peril, the Red scare and the Catholic scare. The Yellow Peril was notably unjust, and was the origin of the White Australia Policy. It was based primarily on perception rather than being rooted in reality. As for Catholics, being one myself, I think Bishop Fulton Sheen’s remark that “Only a few hundred people hate the Catholic Church, while millions hate what they think is the Catholic Church” is rather apt.

But the Reds really were under the beds. It’s just that when we finally convinced people to look, the communists had left the bed for the living room curtains, and the threat to our sleep had since passed to another domain.

Bishop Sheen’s remarks were also my own cover there, as I was questioned about what prompted my presence at the lecture. I ended up in conversation with Justice Dowd afterwards, and the recent issue of a priest who was sexually assaulted while in the seminary was raised, particularly as Senator Nick Xenephon has gone out under Parliamentary Privilege to name the accused priest. He stated outright that the Church’s authority to investigate the claim independent of the police to determine wrongdoing was illegal. I’d have to say that, in spite of coming from the more conservative side of Australian politics, he is still a big fan of big government.

As I drove home on a well-travelled path — one that I had travelled to many pop-culture expos, rugby and soccer games, and to Lucas Heights for my research in the ANSTO Detector Laboratory — I felt a profound sadness. Partly, I felt sad because of Justice Dowd’s lack of consistency and failure to defend the rights of those Bangladeshi girls who are married at twelve, while still upholding the right for a demographic invasion of “refugees” (“They are entitled to come here” were his exact words). And I also felt sad because I had gotten a feeling that many of the Muslims had started to believe their own propaganda. It’s nothing more than a feeling, but given the position of Islam in Australia, I’d say that Islam has been rather flexible about the truth to its own believers, and for that its leaders must be held accountable.

And now that I reflect on it, I wonder if Justice Dowd might heed Sheik Farash’s advice and seek wisdom where it is. I doubt it though, for either of them, for such is the dominance of the sin of Pride that so pervades our culture.

For more on John Dowd, see The Justice Campaign (thanks, Nilk).

3 thoughts on “Is Sharia Compatible With Australian Law?”