Below is the final article of a four-part series on history, human development, and Islam by our English correspondent Seneca III. A slightly different version of this essay was previously published at Crusader Rabbit.

Seneca III informs us that an extension of this series is in the works, and further installments are to be expected in the future. 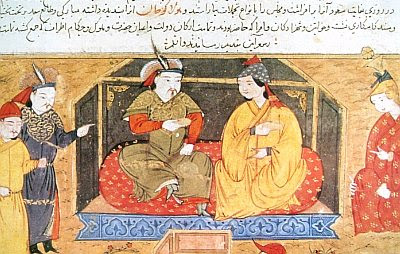 A Long Day’s Journey Out of Night
Part IV: Sexuality

Sexuality comes in many guises, most of which will not surface in this essay in the interests of good taste (well, reasonably good taste!) and simple decency — in particular not those physically cruel, humiliating and positively inhumane practises to which some people subscribe. Such deviations distress me and it has already been difficult enough to write this essay in a form and manner just about suitable for public consumption without venturing into any of the darker corners of the human psyche.

Nevertheless I would recommended that anyone prone to prudishness or with a predilection to take offence at any but the most obscure references to the subject at hand should sign off now. Truly, I have no wish to distress you either.

“…It has long been held that chastity belts were in common usage amongst the gentry of the early Middle Ages. When the Knight or Lord went off to Outremer to besiege a town or two, and hack at a few necks in the process, the Lady remaining behind was locked into a certain type of activity-restricting iron girdle for reasons which, whilst rather obscure in this more enlightened age, may have had something to do with fidelity. Or whatever.

“Furthermore it is rumoured that skilled Lockpicks were in high demand during this milieu and made a quite a reasonable living in comparison with that of their fellow artisans, the Locksmiths. But why not? This, as you may be able to imagine, was not a risk-free profession on the basis that if found in ‘flagrante delicto’ by a somewhat tired and sandblasted Crusader his broadsword was likely to make the malfeasant’s eyes seriously water. Or so it is said. No first-hand reports have ever surfaced!”

…O.K., O.K., I know, the foregoing is complete and utter rubbish, both the legend itself and my vicarious meanderings on the subject, but I have stuck my neck out in order to make two points:

First, human sexuality is a subject that needs to be approached with at least a modicum of humour, otherwise it has a tendency to get serious, and when it does get serious it can turn quite nasty.

Secondly, most myths and legends, and even fairy tales and nursery rhymes, carry an underlying message. In their origins can often be found an idea, a story or even an example of wishful thinking that tells the reader or listener far more about the state of mind of the originator(s) and his or her situation than does the actual message. These mini-histories tend to be palimpsestic inasmuch as what is buried within can often be far more interesting and informative than that which is apparent on the surface.

In 1400 Konrad Kyeser von Eichstätt published ‘Bellifortis’, a book detailing the military technology of the time. Also in the book is a drawing captioned (in Latin) ‘These are hard iron britches of Florentine women which are closed at the front’, but he offers no supporting evidence or corroborating documents. This, for what it is worth, is the first known written account of chastity belts in the West, and succeeds the Crusades by a couple of centuries.

In 1889 one Alfred Pachinger, a German collector of antiquities, claimed to have found a chastity belt on the skeleton of a young woman who had been buried in Lintz, Austria, in the 16th century. The belt itself has since been ‘lost’ and researchers looking through the quite detailed Lintz town records have been unable to find any record of the woman’s burial. (The Teutonic mind-set does appear to surface quite frequently in this area of interest, doesn’t it? Now, why would that be I wonder?)

Modern metallurgical analysis has over the years brought into question the provenance (date and origin) of chastity belts displayed in the Musée de Cluny, the Germanisches Nationalmuseum and the British Museum and they have all subsequently either been removed from the Renaissance collections or clearly and correctly dated to their place in the 18th and 19th centuries. No early medieval examples have ever been located or displayed.

All in all, even this limited amount of evidence would suggest that the idea of chastity belts is a creation of a more modern era, commencing most likely during the early Renaissance and on through to the period of Enlightenment, particularly from about the 1750s onwards, and reflects on one face the historical romanticism inherent in much of the art and literature of the time and, later, on the other face, the prurience of the late 19th and early 20th centuries.

(One might even suspect that the earthy sexuality of the early Middle Ages led to a certain amount of pragmatism in such matters, although there is a saying from the period that goes “He who hath a castle on the frontier or a beautiful wife should sleep with his sword by his side.”)

“Men have authority over women because Allah has made the one superior to the other, and because they spend their wealth to maintain them. Good women are obedient. They guard their unseen parts because Allah has guarded them. As for those from which you fear disobedience admonish them and send them to beds apart and beat them.”

“Because of the frustrations and repressions which follow from the rigidly held sexual mores and prohibitions of his own society, the Arab is dangerous to women of other nationalities. Many Western girls working for big companies with branches in the Middle East have been indecently assaulted or raped. It is impossible for a woman to walk down a public street at night without serious risk. It is difficult enough for her to drive a car alone. Arab men in groups are constantly on patrol in their own cars, watching for prey, in cities such as Beirut and Tripoli”

(You may have noted that this was written 36 years ago, before political correctness had strangled truth, and when Academia was populated by academics rather than by liberal-leftard deconstructionists.)

In ‘The Seven Pillars of Wisdom’ T.E. Lawrence wrote: “Woman became a machine for muscular exercise, while man’s psychic side could be slaked only amongst his peers.” Some months ago, a female political activist and former parliamentary candidate in Kuwait recommended the introduction of legislation to legalize the provision of enslaved female concubines for Muslim men, in a bid, she says, to protect those men from committing adultery or corruption.

The activist, Salwa Al-Mutairi, suggested apparently seriously in a video broadcast online that she had been informed by some clerics that affluent Muslim men who fear being seduced or tempted into immoral behaviour by the beauty of their female servants, or even of those servants ‘casting spells’ on them, would be better advised to purchase women from an ‘enslaved maid’ agency for sexual purposes. She suggested that special offices could be set up to provide concubines in the same way as domestic staff recruitment agencies currently provide housemaids.

“We want our youth to be protected from adultery,” said Al-Mutairi, suggesting that these maids could be bought as prisoners of war in war-stricken nations like Chechnya to be sold on later to devout merchants. “This is not religiously forbidden,” she added, indicating that Caliph Haroun Al-Rashid (766-809 AD) was married to one woman but possessed 200 concubines.

Yes, this really is the second decade of the 21st century, believe it or not, but certainly not in the caring-sharing Umma — wherever it is currently encamped. Followers of this series may wish to note the above reference to ‘clerics’ and, in the final analysis and also in the light of this exposure of the deep, primordial roots of Islamic gender abuse, I think that it is only fair that the penultimate word on this subject be given to a Muslim:

“Sex is our [the Arabs] eternal headache, the incubus that devours us day and night. If you ask me about the size of the sexual problem I will tell you that it exactly the same size as our cranium, so that there is not a single convolution in the Arab brain which is not tumescent with sex.”

But, I suppose, at the end of the day, and rather reluctantly, we shall have to leave the very last word to the French:

2 thoughts on “A Long Day’s Journey Out of Night, Part IV”