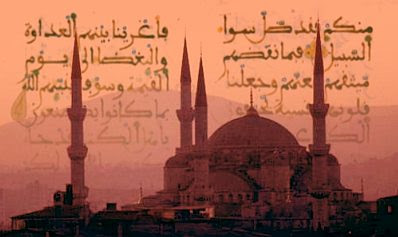 The following passage from the blog Wir wollen keinen Islam in Europa (“We Want No Islam in Europe”) was recommended by our Austrian correspondent AMT, who includes this brief introduction:

Eisvogel is a German Counterjihadist who until about 2008 was a brilliant translator and even more brilliant commentator on Islamic matters, long before most of us were on the scene. She translated Fjordman’s works, among others. Unfortunately, we no longer know where she is; she simply disappeared, taking with her vast knowledge. She is missed.

This piece is one of her classics. To my knowledge it has not yet been published in its English translation.

An Open Letter to Muslims From Eisvogel (Kingfisher)

The following letter was published on the internet some time ago by the author, Eisvogel, proprietor of the blog “Eight of Swords”. We are dong that too, with the intention of paying the Mohammedans back in the same coin. Here is the letter.

You and we — we are enemies. We think it is time to speak openly. Many honorable people on your side have already done that; it is time for us to do the same for you. We have followed your advice to concern ourselves with Islam. We have seen Obsession, we have read Bat Ye’or and Robert Spencer, we have absorbed the video messages of Osama Bin Laden, as well as the comments of Islam scholars from everywhere — especially of those from Al Azhar university in Cairo — and of Mr. Ahmadinejad. We have listened in particular to the impressive voice of the ordinary Islamic people during the so-called Cartoon Affair. We have thought about our common history and used our God-given reason to draw parallels with the present.

We have come to the conclusion that we must apologize for our behavior when we did not know everything. It was our mistake — not yours — that we were uninterested and ignorant about you for so long. We also apologize for burdening you for so long with a “dialogue” in which you were certainly right to be annoyed by the ignorance of your interlocutor, and we insisted on wanting to “educate” you to something Christian-like. And we especially apologize for those among us who have coined the terribly insulting term “Islamism” to slander the true believers and those faithful to the Koran. The pedantic attempt to explain your own religion to you (“Islam means Peace”) was an incredible faux pas and we understand that you were frequently annoyed by our arrogance. It is in fact arrogant to bend other people’s religion to be what you would like it to be. We do not begrudge your making the formulation “Islam is Peace” your own. We do know that your own Prophet has advised you to make use of lying (taqiyya), when infidels are too strong to be subjugated militarily. Who are we to advise you to go against the advice of your own Prophet?

We admit without reserve that you have studied and understood us and our culture in the past decades more extensively than we have yours. We also acknowledge that your course of action — seen in hindsight, now that we know your goals and the methods recommended to you by your Prophet to reach this goal — were almost always straightforward, while ours often resembled a (meandering) footpath.

Well, now we know what you want. You want to expand Dar al-Islam at the expense of the Dar al-Harb and, in the long run, bring about the domination of the entire world by Islam. We also know that the method for that is called jihad, and we are not stupid enough to believe that jihad only means violence. No, you are not that primitive. Jihad also includes demographic efforts, immigration, da’wa (proselytizing), taqiyya (skillful lying), writing jihad (propaganda) and use of economic power (petrodollars). We even believe you that there is an inner jihad: to lead a life that is pleasing to Allah. That is your private affair. We also do not annoy you with the content of our prayers. Naturally, we do not believe that that is the only meaning of jihad. We are not blind, and thankfully your sacred writings are available for us to read.

We also recognize that there are differing opinions within your community on whether terrorist violence is an efficient or a counterproductive means of achieving your goals. We wouldn’t like to inject ourselves into that. You should agree among yourselves about tactical and strategic questions. It may reassure you to know that we, for our part, are moving to discussing Counterjihad among ourselves from a purely tactical-strategic perspective — no longer considering which methods are more agreeable to you, but only which ones are more agreeable and likely of success from our point of view.

By the way, we very much hope that, with the sense God has given you, you see that your intent of Islamizing the whole world or alternatively just Israel and Europe does not appeal to us. It is our sad duty to tell you that we will resist this intention with all means at our disposal. Please note: We do not intend to dissuade you from this purpose. It is not our place, to reverse you religiously and we know that we couldn’t even if we wanted to. We know you are strong in your faith and obedient servants of Allah.

We will no longer argue with you about your intentions; we will just try to keep you from carrying them out. You know how to defend yourselves against Unbelief. Islamic warlords of the past were well aware that infidels do not wish to come under the domination of Islam. If they had not known that, they would not have sent armed soldiers, but friendly missionaries. You still know that today. If you assumed that the Jews of Israel wanted an Islamization of their land in the sense of an Islamically controlled “Palestine” with a Jewish population ultimately reduced to a tolerated dhimmi status. then you would not have had crush them by blowing them up or shooting rockets at them or making nuclear threats from Tehran. You would only have had to make the suggestion and await their enthusiastic agreement.

Due to our unforgivable ignorance of your religious responsibilities, we have in the past not realized that your wish is to Islamize our countries. Therefore your advances toward this goal until now — similar to your efforts in regard to Israel — were possible almost without terrorist violence. Anyone who willingly spreads their legs will not be raped. Whoever is voluntarily conquered does not compel the conqueror to use weapons. We must regretfully inform you that we do not intend to be conquered voluntarily.

Unfortunately, a great number of your colonists are already in our countries. We realize that many of them have no idea that they are functioning as colonists and — certainly to the irritation of the faithful among you — simply want a comfortable life and have no interest in jihad. That is your problem. We see no reason to conduct a dialogue with unknowing private individuals who do not understand that they are chess pieces used for our subjugation. Unfortunately, since we cannot read minds, and because of your discipline of taqiyya, we cannot distinguish the truly peaceful from the pious liars. Besides, you surely recognize that dialogue between two large groups like the Ummah and the West, in which millions of individual conversations are carried on with scattered individuals, cannot be accomplished. On the basis of your and our ideological orientations, we must have this dialogue with those whom you take seriously and not with lax, unorganized individuals.

So What Are We to Do?

From the comments made by Islamic organizations and Islamic individuals (as well as their hostile attitude) in our countries, we gather that Muslims do not feel comfortable in the West and do not like us. O.K. We don’t like them either. We will continue to do what these persons criticize as “discrimination, racism and Islamophobia.” For instance, we will continue to have the quirk of filling jobs according to qualifications and not religious quotas, and of insisting that our laws be kept. We know that our laws are false in your eyes because they contradict sharia, but we would like to maintain them nonetheless.

We would very much like to solve that peaceably but, if necessary, we can also be nasty. We are not as nice as our Bleeding Hearts have been telling your for a long time. We belong to the same species as you and we can also show our ugly side. We hope that you will appreciate this honesty, which you have not been accustomed to from us until now.

We also do not find it good that our economies pay dearly for oil from Islamic countries and yet support Islamic immigrants, whom we do not need, with social aid, paid for by increasingly oppressive taxes. Here is what we propose: We will continue to pay for the oil, but we will expel the Islamic social welfare cases and the criminal Muslims and completely halt our aid payments. We recognize that the presence of many Muslims in Europe serves your purpose (expansion of Islam). But surely you see also that is does not suit our purpose (preventing the expansion of Islam). Rather, it proves more and more to be counter-productive.

We would suggest that you accept these deportations and that we on our side pledge not to attempt to export our riff-raff — especially the neo-Nazis — to the rich oil countries. We further pledge not to spread Christianity to your countries “with the sword” or technological warfare. We could do that. We did it in Latin America (and it was very ugly). Today, we don’t want to do that. However, we reserve the decision to intervene militarily, if and when we get the impression that your military development could become dangerous to us (including Israel).

For the rest, we have no interest in “measuring penises” to compare our military capabilities. We find it crude to make that kind of statement or to boast of superiority — that is an important element of our culture. Nonetheless, you will understand that we are taking stock in this regard — discreetly of course — and encourage you to do the same.

We would be happy to resolve everything without war and violence, and so we suggest that you carefully calculate your chances of achieving your goal — which is diametrically opposed to ours — by military/terrorist means or immigration. We expect a clear answer when you have decided. Then we could postpone the troublesome subject of Europe’s Islamization several centuries into the future, avoid each other (since we are mutually antipathetical) and concern ourselves with the necessities: our desire for oil and your desire for medicinal and the other attractive achievements of a civil society.

We would appreciate an honest answer.

Should you prefer — against our expectations — to resolve the question with violence against persons (Israel is presumed to be part of the West), we will see ourselves forced to likewise become violent. We will hear whiny plaints that you were our victims, but neither believe nor consider them. We are prepared to accept violence against specific objects (national flags, images of heads of government and religious authorities), since we would like to allow you a vent for therapeutic relief of aggression. We are not inhuman. From now on, damaged embassies and any violence will be seen as a declaration of war.

Your Enemy,
The West

6 thoughts on “A Fireside Chat With the Ummah”