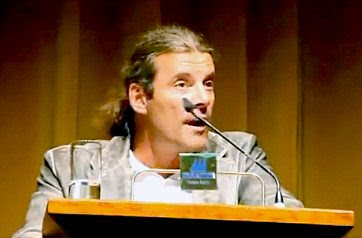 Below is the full text of Oskar Freysinger’s speech in Berlin last Saturday, as translated by JLH. Note: Mr. Freysinger departed from the prepared text when he spoke, so this version differs slightly from what can be heard in the video and audio recordings.

A full report on the day’s events is here.

Berlin is worth a trip. Especially today. Especially here. Because here and now an important signal is being given to the peoples of Europe. The signal for a European Spring! To offset the autumn mood in the EU. So that, instead of the mood of doom, finally a mood of awakening will come. An awakening in the name of freedom!

Yes, yes, cherished FREIHEIT! That is also the name of the party here in Germany that offers an alternative to bureaucratism, centralism, loss of democracy, uncontrolled immigration and Islamization. An alternative to self-destruction.

My dear Berlin friends, I come to you today as a neighbor. And as a concerned friend.

Since I am a citizen of a small country which is put under greater and greater pressure by the EU, it is near to my heart to support the truly democratic forces in the EU conglomerate. Only if these forces prevail can I hope that the Great Power pretensions of the EU will be abandoned and its relationship to Switzerland will at last be shaped in the way it should be between civilized and respectful neighbors.

Freedom is one of the democratic forces I count on. But why does the EU exert this kind of massive pressure — economically, financially and politically — on my country? Is it arrogance? Greed? Envy? All of those may apply, but the true reason lies deeper.

The EUSSR will no longer tolerate the existence of a small country in the heart of the continent, whose people still want to decide their own fate. A prudent, little bit of a folk that has thus far withstood the over-indebtedness which is playing hell with the states reined in by globalization.

For that is the goal of all global financial institutions and international monetary funds: The weakening of nation-states in order to lead them to their dubious “good fortune.” The wealth of peoples is destroyed en masse, so that the weakened states can be reduced to willing agents of a global dogma.

We Swiss hate every form of paternalism! We want no patronizing, no foreign judges! Our citizens are independent and imaginative enough to take their fate into their own hands.

Just picture this: On the southern border of Germany is a country in which 53% of the people have voted for deportation of criminal aliens; a land in which every minor rise in the VAT must be approved by referendum. Who is surprised that the VAT is still at 8% in Switzerland while it has reached 20% in the EU?

A study by the French economic expert Yvan Blot demonstrates that where state
affairs are voted on directly and democratically, the rates of duties and taxes are on average 30% lower than where state affairs are decided exclusively on administrative and policy grounds.

We watch our own wallets more carefully than other people’s money. There lies the future of the continent. Not in further expansion of a bureaucratic and centralized monster that will one day swallow its own children.

In Switzerland, the power is still in the hands of the people. We Helvetians were able to vote on entry to the EU… and wisely looked the other way. In retrospect, this decision has proven to be a great good fortune.

How did that work in Germany? Elites distanced from the people decided for the people. The same elite who introduced the euro, which, at one blow, caused a 30% loss of purchasing power for the average German citizen.

In Switzerland, the possible introduction of the euro had to be approved by the people. You can just picture the result.

Of course, the strong Franc would then be no problem for our export economy, but we would be stuck in the euro trap like the others and would have to bleed financially for a completely broken-down statist system, just as the German taxpayer has been doing for years. Better to stay flexible and economically independent.

Direct democracy means that the optional or obligatory referendum underlies every law proposed by parliament, and nothing can be decided over the heads of the people. Direct democracy means that determined citizens can launch initiatives with 100,000 signatures, which must be put before the people. This gives political decisions much greater legitimacy than the usual parliamentary resolutions. No one in Switzerland would think of questioning a decision by referendum which was approved by 50-70%. What the people have decided is valid and everyone has to adhere to that, Period. Even the administration. Especially the administration.

That is how it was with the famous/notorious anti-minaret initiative in which I was the anti-muezzin. 58% of the Swiss population decided in November, 2009 to prevent the occupation of public space by the dominating symbols of a religious dogma.

This decision by the last free population in Europe had a signal effect. In its wake, decisions were made about the veiling of women in France and Belgium and the construction of a Saudi-financed giant mosque in Norway was prevented. The dhimmi attitude of Europeans sustained a wound which must not heal over, if the millennia-old European civilization is to survive.

For Europe is more than a plot of land, more than a continent, more than the sum of its countries. Europe is an idea, a cultural landscape, an intellectual space shaped by history. Europa is the cradle of the modern constitutional state, the treasure-house of human rights, of freedom of opinion and expression.

This is ever more strongly endangered by the possibility that our political elite will bend their necks before a religious dogma that is alien to our intellectual history, our values and our constitutional state.

This dogma is gnawing away at the pillars of our system of laws, wherever it is allowed some space. This dogma demands total obedience from its followers. They are in no case to integrate into our value system. That would be like treason and can even be punished with death. They are expected to conquer our intellectual home, make the Western world subject. Not with tanks, rockets or riflemen. Not through brutal revolution.

No, Islam is in no hurry. It has an eternity.

A long process of softening up and leisurely occupation of our weakening, child-poor society is foreseen. The Islamic doctrine is expected to gradually creep into everyday life and Fortress Europe will crumble from within. Just think of how the Serbs lost Kosovo. Through demographic development and the help of NATO, which brought about the founding of the first Islamic state on European ground. What an ominous sign.

The Islamic dogma is succeeding everywhere. In Turkey, the Islamists are gradually occupying all judicial and army posts, in order to obliterate the heritage of Kemal Atatürk. Lebanon will become an Islamic state in the next decades, The Arab Spring is on the point of being taken over by the Islamists. In Iraq, in Egypt and in Pakistan, the last Christian communities are facing extinction,

And what are we doing? We are allowing this violent doctrine, unhindered in cultural ghettos, to strain at toppling the nation of laws. We just shrug our shoulders when girls are forced into marriage and Muslims willing to integrate are pressured and threatened. When women are beaten and whole city districts are taken over, we look the other way. We believe we can soften the power hunger of the holy warriors with welfare money.

We believe we can buy peace! What lunacy! No one fingers the Prophet’s beard. Fanatics cannot be bought. Germany should know that better than any other country in the world.

Dear Berliners, here I stand, and I cannot do otherwise, lest soon no human being in this Europe will be able to take the responsibility for what represents the pillar of our culture, of our system of law and of our humanity: transcendent, unconditional love of neighbor.

If we lose this battle, there will be no second chance, for Islam does not give back what it has conquered. So I summon all the humanists of this continent not to keep their heads in the sand and to resist the Islamic dogma’s drive to conquest. Let us stand together and uncompromisingly insist upon the primacy of our civil law over any religious dogma. Let us find our way back to our precious intellectual heritage.

Islam is only as strong as we are weak.

Let us oppose it with more than McDonald’s, soap operas, stupefying TV programs and brutal video games. Our culture has so much more to offer. Let us get back to depth and endurance, to organic growth. Let us stay alert and critical, so long as even a grain of Socrates lives on in us. Let us no longer subject our spirit to the dictates of the material. Only that way can we prevent brutal power politics being spread in the name of religion. Only that way do we have chance to leave our children a peaceful Europe, shaped by respect and dignity.