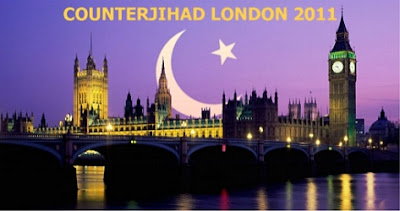 The Baron has been away for an eternity the last few days in England, meeting up with various Counterjihad activists. The culmination of his visit occurred today, when a group of activist leaders got together at a convivial location to discuss topics of mutual interest.
[Translator’s note: a “convivial location” in Virginia would signify some place where the coffee cup never empties; or in the summer, the iced tea glass. In England it appears to mean a setting in which there are barrels and barrels of draft beer. I’m not sure whether one is given a half-pint glass or they simply hand each patron his own rubber siphon hose.]

The Baron said the focus of their discussion was the situation in Britain, with special attention to both the English Defence League and to preparations for the next general election. Since representatives from Europe were present, pan-European topics were also considered.

The following countries were represented at the meeting:

I don’t know any more than this at the moment. They don’t tell me nuttin’ – which is how I like it. Me brain is too cluttered as it is. The Baron will be returning to Schloss Bodissey later this week. He says he’ll give you a full report after he recovers from jet lag – to which I would add, and after he’s taken care of the various things that Entropy was busy with while he was gone.

Like what? Oh, like the belt on the vacuum cleaner that broke while the thing was busy sucking up my Kindle charger. No harm done to the Kindle connection (d.g.), but the vacuum cleaner smells of eau de burning tires and the brush doesn’t roll anymore. Takes a little testosterone to wrestle the new belt onto that roll.

I think I’ll name our next pet “Entropy”.

And then there are those four hundred or more must-be-answered emails…so far…plus the broken internet satellite connection. I’m going to call the satellite people on Monday, but I’ve always noticed they respond better to phone calls from men, so it may take his voice to get their attention.

Maybe I’d better get in more coffee before he returns.

I do hope he remembered my kippered herrings.

How come the new improved version of anything never is? Now I’m having to put paragraph tags where a simple line break would do before. And it appears to be burping here and there.

They have a new better dashboard,too, which I refuse to open. At least while I have a choice in the matter. Soon they will make me an offer I can’t refuse. Like the time they took away our archives until we installed the so-called Better Blooger. It’s not.

What am I gonna do? Ask for my money back?