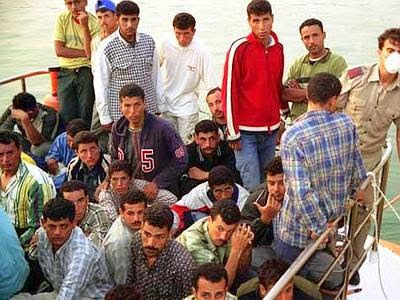 In the past eight months, since the North African refugee crisis began, the European countries bordering the Mediterranean have done their best to avoid accepting all those boatloads of cultural enrichment that try to land on their shores. Italy and Malta argue about who has to accept the illegal immigrants, with each trying to foist the burden off onto the other.

Italy gave temporary residence visas to thousands of migrants, allowing them to travel to other countries in the Schengen region, in hopes that they might abscond to a more northerly clime. However, when large numbers of Tunisians tried to cross the border into France, the French checked the fine print of the Schengen Agreement, and found a way to justify sending the enrichers back to Italy.

So, despite the high ideals professed by the European Union, it seems nobody really wants the migrants.

Except for one tiny village in northern Italy, whose mayor is desperate to get his hands on some of those culture enrichers on Lampedusa. We’ll have more in a minute on the village of Acceglio, but first let’s look at the latest arrivals in Italy.

Since my last post on the topic, another 179 illegal immigrants have landed in southern Italy. This sends the year-to-date total over 54,000, which is not enough of a blip to raise the displayed temperature on the Cultural Enrichment Thermometer.

The first boatload contained 105 Tunisians, and was rescued off Lampedusa:

(AGI) Lampedusa — The island of Lampedusa witnesses the landing of 105 refugees. The party included four women and the boat, according to the Italian coast guard, departed from Tunisia.

The boat had run out of fuel and was spotted by a coast guard patrol boat ten miles off the coast of Lampedusa. The party of 105 was taken onboard and ferried to Lampedusa.

The other 74 immigrants were rescued from a drifting boat off the southern coast of Sicily:

(AGI) Palermo — 74 immigrants claiming to be Libyan have been rescued by a Guardia di Finanza patrol boat off the coast of Ragusa. They were subsequently taken in the port of Pozzallo and sheltered in the existing tension structure. They were on board of a stricken boat going adrift in Italian territorial waters. The boat was abandoned after the passengers were transshipped onto the Guardia di Finanza patrol boat.

Now we come to Mayor Riccardo Benvegnu of Acceglio, which is an alpine village of 170 people in northern Italy. Mr. Benvegnu is desperate to import some of that cultural enrichment from Lampedusa. He wants immigrants for his village — 830 of them, to be precise, which would almost sextuple the town’s current population.

When you take a close look at the crisis in Acceglio, you’ll discover that the issue — as it so often is when immigration is involved — concerns socialism. As a part of Italy’s austerity plan for coping with its debt crisis, towns with under 1,000 residents would no longer be considered separate municipal entities. The mayor doesn’t want to lose his municipal status and merge with adjacent areas. He wants Acceglio to keep on receiving its own specific benefits from the center.

An alpine village in northern Italy has asked the island of Lampedusa, at the other end of the country, to urgently send 830 refugees in order to boost its population to 1,000 and avoid administrative obliteration under swingeing government cuts.

The appeal by the mayor of Acceglio is one of the more dramatic expressions of resistance to a €45.5bn (£40bn) austerity package announced by Silvio Berlusconi’s conservative coalition this month to try to tackle its debt crisis and assuage market jitters.

As part of the cuts, villages and towns with a population of less than 1,000 will be stripped of their municipal status and forced to merge with neighbouring communities, to the dismay of the mayors and councils of nearly 2,000 tiny settlements.

Acceglio, which lies close to the French border, is one of the towns that faces being wiped off the map – it has a population of just 178 and even that is in danger of dwindling further because many of the inhabitants are pensioners.

The mayor, Riccardo Benvegnu, 64, has written to his counterpart on Lampedusa, where more than 40,000 North African and sub-Saharan refugees have arrived this year, to request that 830 immigrants be despatched north as quickly as possible.

The influx of fresh blood would put the population over the threshold of viability.

The mayor, a former postman, admits his request is “a provocation” but says he can see no alternative if the village is to keep its council, which looks after rubbish collection, school buses, clearing the streets of snow and other key local services.

He said the migrants could be accommodated in dozens of apartments and second homes that had been empty “for years”.

“It’s controversial, I admit, not everyone is in agreement with me,” he said. “But to save the town, this is the lesser of two evils.”

Bernardino De Rubeis, the mayor of Lampedusa, said the idea of settling some of the migrants in the Alps was “commendable” and that he would refer it to Roberto Maroni, the interior minister.

The unusual population swap is just one of the strange consequences of the government’s plan to save billions of pounds by slashing two tiers of local government – municipal and provincial – as part of the austerity drive.

Finally, here’s a follow-up on the accusations that NATO vessels allowed a migrant boat in distress to drift without assistance until most of its passengers died of hunger and thirst. The incident occurred in May, and if I recall correctly, French and American vessels were among those accused of ignoring the refugees’ distress call.

The Council of Europe will be investigating the incident, beginning next week:

(ANSAmed) — Strasbourg, September 2 — Tineke Strik, the Dutch Senator appointed by the parliamentary assembly of the European Council to conduct an investigation to determine who was responsible for the deaths of the immigrants fleeing from Libya while they were crossing the Mediterranean, will be in Rome on September 6 and 7 to begin gathering elements that could contribute to clarifying the situation. The senator will meet with the survivors of the shipwrecks as well as Italian Coast Guard personnel, UNHCR officials and representatives from NGOs active in the field of immigration. The purpose of the meetings is to evaluate in particular how the ships carrying these people are stopped or let go. There was a great desire within the parliamentary assembly for the investigation conducted by Strik to take place after British daily The Guardian published an article in May stating that 61 immigrants who fled from Libya died in the Mediterranean after their calls for assistance went unanswered.

One thought on “Camp of the Saints: Desperate for Enrichment”