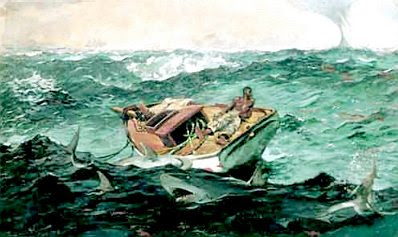 It was supposed to be Dymphna’s turn to do the fundraiser post tonight. However, as she says, she is “under the weather.”

And so are we all here in Central Virginia, or at least we expect to be within about twelve hours or so. Hurricane Irene is scheduled to come ashore in a little while, and its belts of rain will be affecting us by the middle of Saturday.

According to the most recent projections, Irene will make landfall somewhere between Emerald Isle and Beaufort on the coast of North Carolina, most likely at Atlantic Beach or Morehead City. After that it will scurry up the coast, picking up speed as it passes just offshore of Virginia Beach, and then right along the coast of the Eastern Shore, raking Assateague Island, Ocean City, and the Delaware Dunes. After crossing New Jersey, it looks like it will miss Manhattan by a hair and nail Long Island.

The damage may not be as bad as was originally expected, however. The hurricane dropped to a Category Two, and will be Category One by the time it hits the beaches. Since it is coming in further east than Isabel did (September, 2003), I suspect that Schloss Bodissey will emerge relatively unscathed.

But just in case: be aware that we live in a very rural area, in the midst of a lot of things called “trees”, many of them hovering over the co-op power lines. They’re just waiting for the moment when ice or snow or wind or lightning gives them an excuse to come crashing down, depriving thousands of us hicks of our electricity supply. Irene is their main chance.

So, if the lights go out here tomorrow, you’ll know why. I’ll post a final notice before the UPS gives out, if I can. Isabel knocked out our power for three days, but I don’t think this one will be as bad.

The following far-flung locations donated to our storm-wrack’d refuge on Friday:

Many, many thanks to all of the generous people who contributed.

God willing and the Creek don’t rise, I’ll be reporting in again this time tomorrow. Watch this space.

One thought on “Under the Weather”