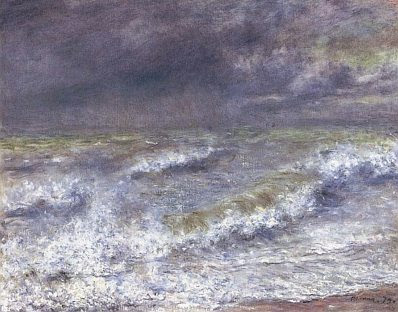 In her post last night Dymphna likened the emotional experience of the past month to the unexpected breaking of a wave over an unwary swimmer. Our sensation of being suddenly flooded informed the nautical theme for this quarter’s fundraiser. Beginning on Friday July 22, and continuing for more than two weeks, we were overwhelmed by a vast tide of events beyond our control, and swept into a maelstrom that no one would enter voluntarily.

Dymphna’s description, plus the hurricane that is now advancing up the coast towards us, put me in mind of a memorable event that occurred thirty-six years ago, in late July 1975. Hurricane Irene seems to be heading tomorrow for Atlantic Beach or Morehead City in North Carolina, but back then Hurricane Blanche never came ashore — it just paralleled the coast for a few days, close enough to affect the surf at the coastal resorts.

I was in Virginia Beach at the time, and went swimming in the surf one morning. As it happened, I entered the water about twenty minutes before the local authorities decided that the surf had become too dangerous, and instructed the lifeguards to pull everyone out of the water.

There’s nothing like an offshore hurricane to make body-surfing exciting, so I enjoyed myself for the first few minutes. Then a particularly large wave broke over me, and its backwash pulled me further out. When I struggled to my feet I realized just how BIG those waves were, and how frequently they were breaking. My feet could barely touch the bottom, and I became quite frightened — it seemed that I might not be able to make it safely back to shore.

Then the old Boy Scout training kicked in. I recalled the manual’s advice to ocean swimmers caught in a cross-current or an undertow. The most important tactic is counterintuitive: stop struggling to keep your feet in contact with the bottom. Pull them up and float in the breast-stroke position. Keep your body at right angles to the incoming surf, so that no breaking wave can catch you by surprise, yet you can turn and pull towards shore with each wave as it comes by.

Keep your head above water. Here comes the wave: turn and swim a few strokes towards the beach. Repeat with the arrival of each new wave. Don’t put your feet down and walk until the water is below waist level.

That’s what they taught us in Scouts, and it worked. It seemed to take hours, but it was really only a few minutes until I staggered out of the water and up the beach just as the lifeguards started calling swimmers out of the water. I flopped down on the sand, breathing hard, and rested for a few minutes, thanking the Lord for giving me one more chance.

I promised myself then and there that never again would I mess with another hurricane surf. Yet here I am, thirty-six years later, having just emerged from another kind of dangerous surf.

Maybe the Boy Scout training took hold again this time, but in a more generalized form. When huge turbulent events overwhelm you, there’s no point in trying to retain any real control. You have to pull your feet off the bottom and go with the flow.

That’s what I did for the first two weeks, paying no attention to anything but the next foaming crash of crisis that broke over me. I pulled with each new surge in the direction I wanted to go, and every day the surf got a little less rough, and water was a little more shallow.

My feet are now touching bottom again, but I haven’t quite arrived at the beach of normalcy, not just yet. When I reach it, I trust the Lord to provide me with a few moments of respite, just lying there in the warm sand, breathing hard.

Unfortunately, this time I can’t swear off the hurricane surf for good. Rough water goes with this job, and after I get my breath I may well have to wade right back into that raging tide.

Thursday’s donors body-surfed in from the following locales:

Far Abroad: Australia, Belgium, the Netherlands, Poland, and the UK

Many thanks to all the generous souls who have contributed.

One thought on “Storm Surge”