Thom Jefferson is a Gates of Vienna reader and commenter who lives and works in East London. He encountered the following poster at 4pm today on Whitechapel Road in Tower Hamlets, and took a photo for us: 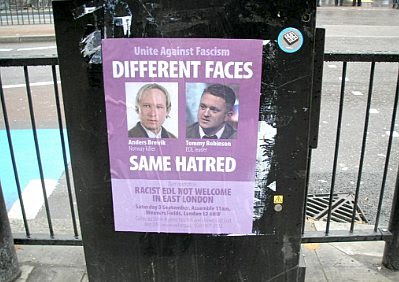 I enlarged the poster and removed the foreshortening to make it clearer: 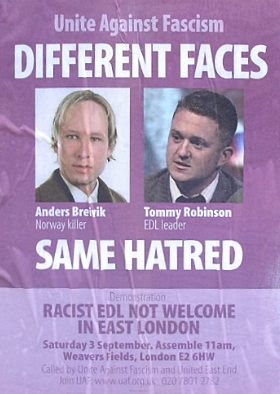 So this is what we’re all up against.

This is an example of the favored tactic that is being used against us on both sides of the Atlantic, and we can expect more of the same for the indefinite future.

For what it’s worth, here’s my advice to EDL members and their sympathizers, both inside and outside the UK:

One final note: if UAF are fighting this hard, and this dirty, it means they are losing.

They are afraid of the EDL.

They are frightened of the English people.

This means you’re being effective. Keep at it.