Muslim immigrants to Scandinavia are treated well when they arrive in their new homes. Their hosts hope that Nordic generosity will be reciprocated when the time comes — as it inevitably must — that the immigrants become the majority in their adoptive countries. This sentiment was even stated publicly by Jens Orback, the Democracy Minister in a previous Swedish government, who said: “We must be open and tolerant towards Islam and Muslims because when we become a minority, they will be so towards us.”

Unfortunately for Scandinavia, Muslims are notorious for biting the hand that feeds them. In any Western society where they become numerous enough, they eventually begin to agitate, complain, vandalize, attack, and sabotage the social and political mechanisms of their host society.

In this latest incident, culture-enrichers in Denmark sabotaged the election campaign of one of their own, a Social Democrat named Yildiz Akdogan. Our Danish correspondent TB sends a translated article about the incident, and includes this introductory note:

Here’s a little story from the new, enriched Denmark. It really looks like the Socialists are going to win the election. But now it seems that their newly-imported buddies are a little more than just easy votes. The Role Model Muslim Immigrant of the Social Democrats has had a little setback in her campaign.

And his translation from Ekstrabladet: 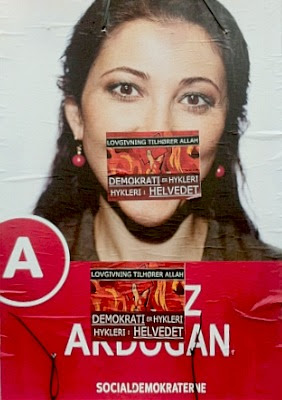 The IT spokesperson for the Social Democrats, Yildiz Akdogan, was on the street last night to put up election posters. But already on her way home, at half past two in the morning, she discovered that her election posters had been vandalized.

Large stickers with hateful quotes that condemn democracy had been placed over her face and name. The vandalism targeted only election posters for Yildiz Akdogan in Tingbjerg, Nørrebro and in her constituency in Brønshøj.

The chairman of the Social Democrats at City Hall, Jesper Christensen, has reported the vandalism to the police as an instance of politically motivated vandalism.

“I’m obviously very sad. It is hard work getting all these posters up. But in addition I am also very angry, because I think this is an attack against democracy,” Yildiz Akdogan says to Newspaq.

She now awaits the outcome of the police investigation, but will continue undeterred with her campaign.

8 thoughts on ““Democracy is Hypocrisy””