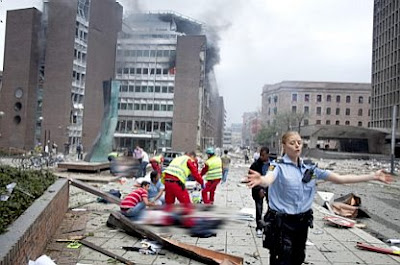 Final Update 4:38pm EDT: Live-blogging on this post is now complete. I’ll do further updates in separate posts. Many thanks to the Scandinavian Gang of Five for making this report possible.

The Norwegian royal family is said to be safe. The Castle is quite close to the blast location in Oslo.

A witness saw a suspicious-looking man in police uniform two minutes before the bomb (Norwegian).

It’s possible that the shooter at Utøya was also the man seen in Oslo. The island is an not far from Oslo, and can be reached easily by car in a matter of minutes.

Henrik: “Utøya is perhaps ten kilometers or so away from downtown Oslo. The road is fine (they just showed it), it would be no problem at all to get from the center of Oslo to the island quickly.”

Here is the report (in Norwegian) from the workshop at the Utøya summer Socialist youth camp on “Combating Xenophobia and Islamophobia.”

A shotgun, a rifle and a pistol were used on Utøya. One witness says that the shooter did indeed target swimming youths in the water (Norwegian).

Norwegian television requests people with blood type O to show up to donate. Medic choppers are now flying back and forth between Oslo and Utøya.

Restaurants and cafes all over central Oslo are closed now.

Despite being a member of the Schengen group, Norway has implemented temporary border controls.

The reports from Utøya still mention anything from 10 to 30 dead, but everybody says it looks like a slaughterhouse, with dead bodies floating in the water.

Several people (Utøya is an island) tried to swim away from there. Some apparently failed…

The police are now saying (Norwegian) that they “know the identity” of the Utøya shooter, and that he “may have been” involved in both of the attacks, i.e. also the bombing.

TV2 Norway is also evacuated, due to a possible bomb in their buildings. Checkpoints have been set up around Oslo. Military police have been deployed.

Police confirm the two incidents (Oslo and Utøya) are related, according to Dagbladet.no.

The latest indications from police point in the direction of a convert in the Utøya incident. Aftenposten.no says four are probably dead. Other sources say “many,” not just several. Danish television repeats the figure “possibly 25-30 killed on Utøya”.

Henrik: “The situation in Utøya will take some time to clear up. It’s somewhat remote, a countryside setting, a tent camp for the youth. Many were swimming for safety. Very difficult to figure out who are safe and who are missing.”

The Utøya killer identified himself to security, and was granted passage to the (tiny) island. His weapon was a rifle with scope. Police suspect there may be explosives on Utøya.

560 were on the island. It’s hard to keep count of who was there.

Abu Suleiman al-Nasser: “Today, Norway was targeted in order to serve as a lesson and example for the rest of the nations of Europe.”

There is still chaos in central Oslo, much of it evacuated. They are also checking the airport express train for bombs.

“Many” are now said to have been found dead at Utøya. Unconfirmed numbers (eyewitness calling on the phone, unverified): 25-30.

It took an hour to eliminate the killer, who apparently had several weapons. The authorities are now checking the island for bombs.

The shooter at Utøya is consistently described as tall and very Nordic-looking.

It is now confirmed by the police that a person has been caught at Utøya.

Seven people have been confirmed killed by the bomb, and several others severely wounded.

This video shows the full extent of the destruction after the bombings.

Corriere Della Sera reports (Italian) that the terrorist group Ansar al-Jihad al-Alami has claimed responsibility for the explosion in Oslo with a message on a jihadi forum, blaming the presence of Norway in Afghanistan and “insults” to the prophet Muhammad.

NRK is reporting that an unknown group called “Helpers of the Global Jihad” have posted a message that this is only the beginning of the reaction to Norwegian periodicals publishing the Muhammed cartoons, according to Andrew Boyle, a journalist in Norway.

There are now unconfirmed rumors that the shooter in Utøya has been caught.

Several of the shooting victims were allegedly killed. No word on how many.

Witnesses in Oslo report that they can still hear multiple helicopters and ambulances.

There are now four confirmed deaths in the Oslo attack.

There may well be several dead at the Utøya shooting, too, but we don’t know yet. There are conflicting reports, lots of chaos and rumors.

The latest report says he used a maskinpistol, which means submachine gun.

The police have asked everybody to evacuate central Oslo (Norwegian). That includes the news desk of newspaper Aftenposten:

At least four people are now reported to have been shot (Norwegian) at the shooting incident in Utøya. An “automatic weapon” of some sort was used.

People are hiding and swimming away from the area. It is hard for ambulances to get there because the shooting is still ongoing.

Numerous deaths are now reported from the shootings. But there are conflicting reports; some say wounded, others dead.

The foreign minister spoke at Utøya today, and the topic was the Middle East. There is even a video of it, uploaded three hours ago. Seems to have been an anti-Israel speech. According to Fjordman: “It’s an anti-Israeli, pro-Palestinian crowd of young Socialists.”

The Prime Minister himself confirms that there has been a shooting episode at the Labour Party’s youth summer camp. Still ongoing, with few details (Norwegian).

The shooter was dressed in police uniform, referred to the bombing as the reason he needed to get into the meeting, before he started shooting.

Social Democratic Youth sponsored the meeting where the shooting took place. Utøya was filled with a crowd of young members of the Labour Party. Former Norwegian Prime Minister Gro Harlem Brundtland gave a speech there earlier today, and the current Prime Minister Stoltenberg is supposed to do so tomorrow.

PM Stoltenberg will not give a press conference proper, for security reasons.

An additional attack outside of Oslo (Norwegian): One person dressed as a police officer opened fire at a crowd of several hundred young people.

There are conflicting reports about how many devices were detonated. It is believed that some bombs did not detonate, and are still in place in one or more buildings.

The bulletproof windows next to the Prime Minister’s office are intact, but the rest of the Government building is severely damaged.

It is reported that it might have been a fertilizer bomb.

Prime Minister Stoltenberg is on the air now. The members of the government are all reported safe.

“According to U.S. government sources on the scene”, one of the two blasts was the result of a massive vehicle bomb.

They are evacuating other media houses, and say that the evacuations seems to have nothing to do with the prior explosions.

It is now reported that Prime Minister Stoltenberg was not present in the building. Stoltenberg will comment in half an hour.

A wrecked car can be seen in front of the building. But it’s not sufficiently destroyed that it could have held a bomb of this size.

One corner of one building appears to have had all its bricks stripped off.

It is now solidly reported as a “terrorist attack”.

Update 11:41am EDT: Comment from Fjordman: “Please keep in mind that the left-wing government of Jens Stoltenberg that was just bombed is the most dhimmi appeasing of all Western governments, to the extent that this is humanly possible. They even wanted to fund Hamas openly a while ago.

“The most suicidal and cowardly government in a country with no colonial history was just attacked. How do you explain that as a response to Western ‘aggression’?”

Update: The police fear additional bombs, and warn people to stay away from central Oslo.

Fortunately it is raining heavily in Oslo now, which may help put out the fires.

At Oslo Airport, armed police are now checking all cars entering or leaving.

Update: video of an eyewitness account, subtitled by Kitman:

Update: The police are now calling the incident a “bomb”, and not just an “explosion”, and the newspaper VG calls it a “terror attack”.

This is breaking news — the situation in Oslo is chaotic at the moment, and the only definite news is that Norwegian government buildings were badly damaged, at least two people were killed, and a number of others were injured.

A digest of the various reports:

The building that was attacked houses the office of the Prime Minister.

Hans Rustad from the quality blog Document.no, who calls the explosion simply “terror in Oslo,” says that the Government building resembles the American embassy in Nairobi in 1998.

If this is a terror attack, which it most likely is, it is unprecedented in Norwegian and Scandinavian history outside of wartime. Even the Muslim suicide bomber in Stockholm last year didn’t do nearly this much material damage, and he only killed himself.

They are evacuating parts of downtown Oslo now.

From the sound of it, it seems that eight injured people is a gross understatement. No reports of dead yet, but many wounded.

Although the source of the blast is unclear, Al-Jazeera TV notes that Norwegian prosecutors on Tuesday filed a terrorism charge against Mullah Krekar, founder of the Kurdish Islamist group Ansar al-Islam.

Reuters says PM Stoltenberg is reportedly safe after a blast that rocked central Oslo and knocked out windows in government buildings.

Reuters reports at least 8 people injured in an explosion that knocked out most of the windows in a 17-story building where Prime Minister Jen Stoltenberg’s office is located. The nearby oil ministry is reported to be on fire.

A photograph of the scene on the Aftenposten web site shows several blocks strewn with rubble, and almost all the windows of one building shattered.

There are rumors that the explosion started in a large car, and there may have been a second explosion in downtown Oslo.

Links to sources, both Norwegian and English: